In a number of prior posts we have discussed the very high condition reports for both U.S. corn and soybeans so far in 2018.

In light of talk that these very positive condition numbers could result in record high yields for both crops this piece looks at the past history of USDA yield changes from the June to the July WASDE report.

Note that the first real USDA yield estimate is given in the August crop production report based on actual field measurements and farmer assessments whose yield is then incorporated into the August WASDE figures.

The May, June and July yield estimates are for the most part the same ones used by the USDA when it gives its first look at the balance sheets for the upcoming season at their annual Agricultural Outlook Forum that takes place in the Washington area the last week of February.

These are usually a trend-line figure from the USDA's weather adjusted yield model.

The USDA's June yield estimate for soybeans has only been different from their Feb Outlook yield estimate only once since 1998 and that was in 2005 by a mere 0.1 bushels per acre (bpa).

In corn there have been a number of times the June USDA yield estimate has differed from their February estimate though this has not been the case for the past four years. The question then is will exceptionally high or low crop ratings as of the first week of July cause the USDA to adjust their yield estimate from the June to July WASDE report prior to their more comprehensive yield assessment in August.

This chart shows just that by plotting the USDA change in corn and soybean yields from June to July WASDE report in bpa on the right hand axis vs. crop conditions as of the first week of July on the left hand axis.

For this we use our usual ratings system where we weight the crop based on the percent in each category and assign that category a factor of 2 for very poor, 4 for poor, 6 for fair, 8 for good, and 10 for excellent and then sum the results.

The 1993-2017 average crop ratings are also included on this graphic which is 749 for corn and 730 for soybeans and we also assume that the current ratings for corn at 780 for corn and 764 will persist through the first week of July for the 2018/19 season.

The only other June to July upward revision was in 2003 when the rating was 776 and the USDA bumped its yield by 3.0 bpa.

As for soybeans, the current 764 rating is the second highest rating since 1993 topped only by the 768 rating in 1994 which not coincidentally is the only time the USDA has increased in soybean yield projection from the June to the July WASDE report by 0.5 bpa. We suspect that the USDA will hold pat on any yield increases even with current crop conditions among the best ever.

Note that the USDA has not changed its yield estimate from the June to July report for the past five years even in July 2014 when the corn rating was 778 and beans at 762, just below this year's stellar levels. 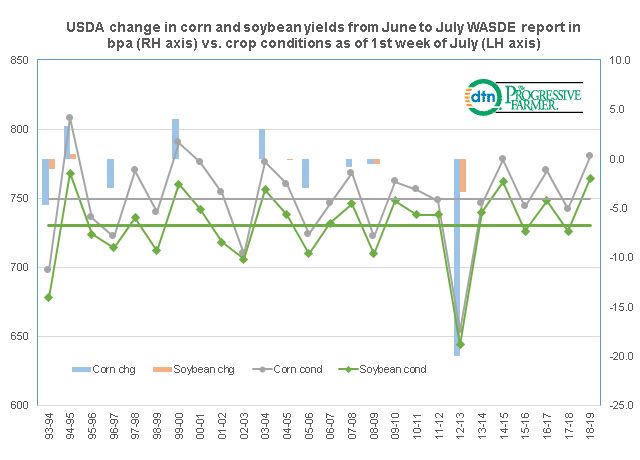