On May 10th the USDA will release its first official balance sheet estimates for the main crops in the first new crop WASDE projections.

This graphic shows the percent change in ending stocks for the main U.S. crops of corn, soybeans and wheat from the February Ag Outlook Forum to the first new crop balance sheet projections that are given in the USDA's May WASDE report.

The 20 year average (1998/99 to 2017/18) shows that the first USDA projection of new crop supply-demand projections has ending corn stocks 3.6% higher than estimated in February, soybean stocks 2.0% lower and wheat stocks 1.6% below their February projection.

One may think in the time between the USDA Ag Outlook Forum and when the May WASDE is released (about the second week of May) not much may have changed, but that is not the case.

In the ensuing 11 weeks the USDA releases the updated March WASDE report, the very important prospective planting and grain stocks in all positions as of March 1 the last business day of March and the updated supply-demand figures in the April WASDE.

The May WASDE corn stocks figure was as much as 58.7% above the Feb Ag Outlook estimate and as much as 38.6% below.

The first wheat ending stocks estimate has been as much as 18.7% over the Feb Ag Outlook estimate and as much as 23.2% below.

Note that the USDA has a little head start on calculating the wheat figures since the winter wheat seedings report is released in mid-January and winter wheat has accounted for about 60-62% of total U.S. wheat production over the past number of years.

As a final note, there is a lot of interest in the USDA's corn balance sheet for the upcoming year.

Since the Ag Outlook Forum, the 3/29 planting intentions came in at 88 million acres, two million less than they had projected in February and given the same harvested/planted ratio and yield they used in February, this works out to 2018 output of 14.070 bln bushels vs. the Feb USDA projection of 14.390 bln.

Meanwhile the last WASDE report pegged 2017/18 ending corn stocks which are the 2018/19 beginning stocks at 2.182 billion bushels vs. 2.352 billion in February based on increased U.S. exports in the sake of a severe Argentine drought.

Finally, the USDA estimated 2018/19 U.S. corn exports at 1.90 billion bushels but in light of the Argentine situation and a deteriorating outlook for Brazil's second corn crop our overseas sales could be as high as 2.30 billion bushels next year.

Hence, a loss of 320 million bushels in lost production, beginning stocks 170 mln lower than estimated in February and export sales possibly 400 million greater than what the USDA estimated barring any other changes could mean ending stocks at 1.382 billion, 890 million or 39% below what the USDA projected back on February 23rd eclipsing the percent decline seen in the 2008/09 season. 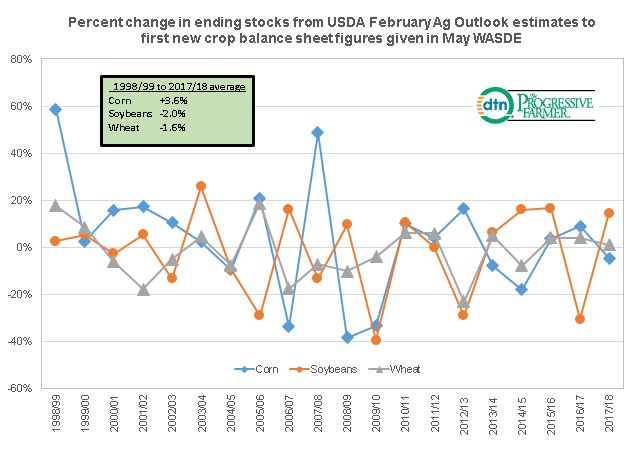