As the New Year gets going, there is not a whole lot of optimism with regard to the price outlook for the major crops, at least for producers.

Large domestic and world grain and oilseed supplies not only have capped any price appreciation, but have led to a very low level of price volatility as we had noted in prior posts.

Barring some sort of weather disaster, it appears that once again there appears little chance of any significant price rally.

In that regard, though a good part of Argentina and southern Brazil have been shortchanged on moisture so far this growing season, the markets at this time seem rather nonplussed.

In addition to the burdensome stocks situation allowing greater tolerance for any South American crop shortfall, the fact that most of Brazil is doing quite well and the realization that the key part of the plant development cycle is still ahead has kept corn and soybean prices near recent lows.

That leaves the U.S. and in that regard, it is still too early to make any definite assessments as to possible 2018 output of key commodities.

However, given ongoing concern about dryness adversely impacting the nation's winter wheat crop and the fact that as of the beginning of the year drought of various degrees was affecting 28% of the continental U.S. (double the percent just three months ago), we wanted to look at the U.S. Palmer Drought Severity Index as of the beginning of the year vs. how the nation's three largest crops of corn, soybeans and wheat deviated from their respective 1980-2017 trend.

According to NOAA, the Palmer Drought Severity Index (PDSI) is the monthly value (index) generated, indicating the severity of a wet or dry spell.

Though there are some years where excess wetness is a problem, it is usually drought that has resulted in some of the worst yielding years since 1980 such as 1988 or 2012.

Fortunately 1989 saw much better moisture and even though the year end with a PDSI of -1.54 corn yields were 2% above trend though bean yields were 1.9% below trend.

Fortunately 2013 saw much better moisture with a year-end PDSI of 1.43.

This year starts with a U.S. PDSI of -1.58, the lowest Jan 1 figure since 2013 but as we have seen, precipitation over the next few months will tell the story. 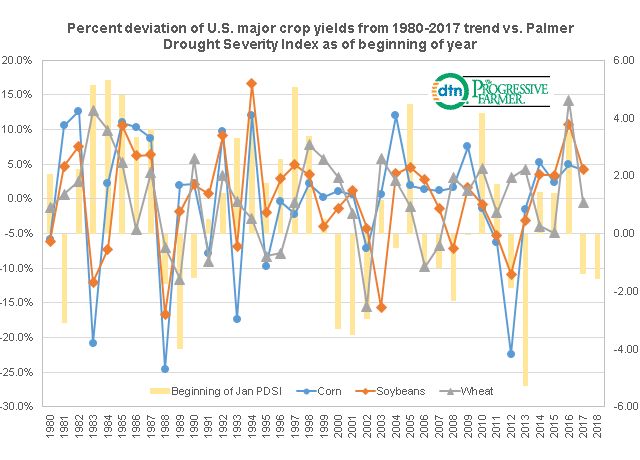