The December 2017 WASDE report as well as the recently released USDA long-term baseline assumptions going out to the year 2017 offer little hope of any sustained recovery in prices based on large beginning stocks, higher acreage next year, a continuation of good yields and bountiful foreign supplies pressuring our export sales.

In prior reports we note that though demand continues to expand at a healthy clip it appears that production based on a combination of increased acreage and rising yields are keeping pace.

This piece looks at the difference in yields of the three major crops; corn, soybeans and wheat between the U.S. and the rest of the world.

The accompanying graphic shows that since 1990, the increase in U.S. corn yields has outpaced foreign yields by about 0.061 metric tons per hectare (MT/ha) annually.

U.S. and foreign soybean yields are rising by about the same pace with our yields increasing at a mere 0.003 MT/ha while the U.S. has lost ground to the rest of the world with regard to wheat yields.

Foreign wheat yields have been increasing at a slight rate of 0.009 MT/ha vs. our wheat yields, though note that U.S. wheat is grown primarily for milling purposes while in many parts of the globe wheat is used for animal feed, so we differentiate with respect to quality

All of this suggests that the U.S. still has the comparative advantage in corn production which is one reason why our production continues to grow even with very poor dollar returns per acre seen in recent seasons. 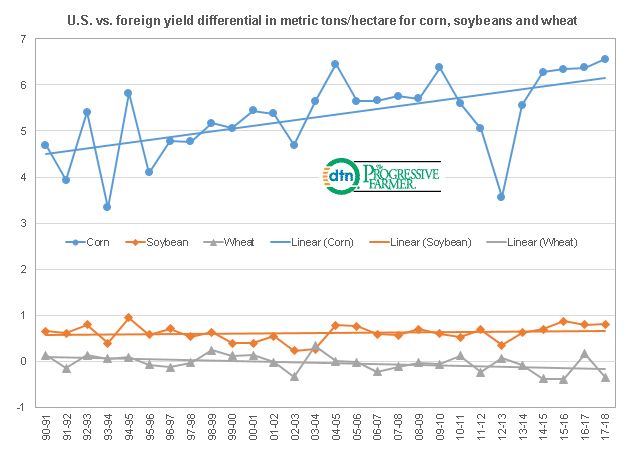