As of week 10, or the week ended Oct. 11, the Canadian Grain Commission reports 14.6019 million metric tons (mmt) of all major crops delivered into licensed facilities, up 3.0179 mmt or 26.1% from last year and 29.1% higher than the five-year average for this period.

Of the selected grains, the percentage of these supplies delivered in the first 10 weeks is higher than seen in 2019-20 and the five-year average for all crops except wheat (excluding durum), which is seen moving at a pace consistent with past years.

This comparison is most noticeable for peas and lentils, with an estimated 26% of farm supplies of lentils delivered (13.1%) and 32.8% of the peas (28.6%), with the five-year average in brackets. A combination of an early harvest, good demand, increasing prices and favorable rail movement are behind this data.

Statistics Canada's final estimates for 2019-20 were released on Dec. 6, while based on producer surveys conducted from Oct. 9 through Nov. 17. The final estimates for the 2021-22 crop year are to be released on Dec. 3, which will be the first producer survey conducted relating to production and will take place during a time when harvest is very close to complete, unlike last year, while a higher volume than normal has since become an elevator receipt or a recorded export.

This week's poll asks which crop you think has the most bullish potential in the 2020-21 crop year. You can weigh in with your ideas on this poll, which is found at the lower-right of your DTN Canada Home Page. 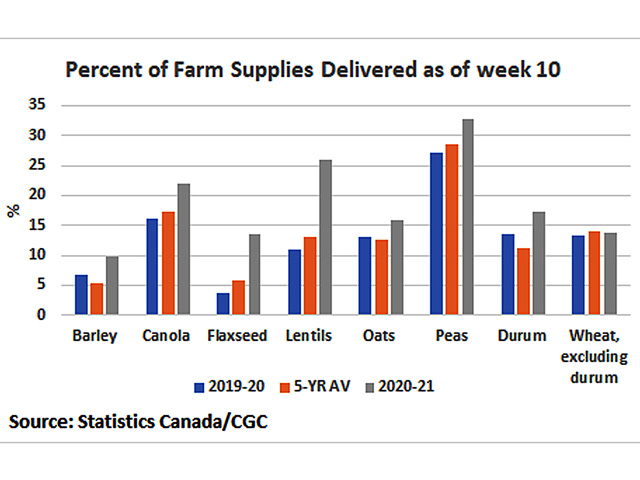