The blue line on the attached graphic shows that on average, the weekly front-month canola chart has tended to reach a seasonal high as of last week's trade over the past five years. Price tends to move sideways overall over the next six weeks prior to moving into a downward slide to the oilseed's seasonal low realized in September.

Prices typically reach a high during spring seeding or early summer as stocks tighten. Indeed, commercial stocks were reported to fall by 18.1% to 1.084 million metric tons in week 41, or the week ending May 13, although this volume remains 26.8% higher than the same week in 2016/17 and also well-above the five-year average. This is reported at a time when disappearance from combined crush and exports also trails the year-ago pace.

After reopening this week following Canada's three-day holiday weekend, old-crop July canola seems reluctant to mirror the move made in soybeans. While July soybeans have moved 32 cents higher in Monday/Tuesday trade, July canola moved just $.30/metric ton higher on Tuesday. Recent highs ranging from $536.30/mt to $539.50/mt continue to act as resistance for this market. The continuous active canola/soybean spread (measured in Canadian dollars/mt) has weakened $12.52/mt this week to $47.63/mt, reaching its weakest spread seen since May 9 (canola trading over soybeans). This suggests that canola may be viewed as expensive relative to soybean prices.

What bears watching is the affect that weather has on old-crop marketing. Should a hot, dry pattern continue on the Prairies, producers could hold old-crop with deliveries falling below average following spring seeding. This bears watching. A move from the $20 range that has governed trade for the past nine weeks, signaled by a breach of the April 9 high of $539.50/mt could change everything.

It is important to note that the seasonal index is just one of six factors that DTN follows in its strategy formulations. 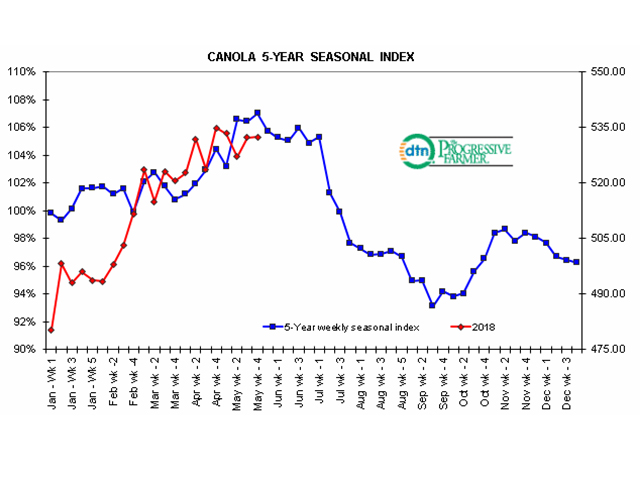