The lowest United States winter wheat acres planted in over 100-years along with weather concerns facing the U.S. winter crop is adding little support to the new-crop spring wheat trade.

The December MGEX spring wheat contract broke down last Friday, breaching a trend line that has been in place since Dec. 28. Monday's trade saw the market attempt to recover the losses, although trade finished with a third consecutive loss on Monday and near the lower-end of the day's trading range. Trade on Tuesday and Wednesday have added further losses this week.

Wednesday's loss of 1 3/4 cents resulted in a breach of the 61.8% retracement of the move from the December low to the February high, while ending near a further level of support found at $5.60 3/4/bu., the 67% retracement of the same uptrend. A sustained move below this level could result in further technical selling, with the noncommercial net-long futures position reported at 8,513 contracts as of Feb. 28, still holding near the highest levels seen since September 2014.

The brown line in the third study points to an increasingly bearish view of new-crop fundamentals held by noncommercial traders. Today's close at minus 12 1/4 cents (March 2018 trading over December the 2017) is the weakest seen since Nov. 21. For now, the bearish level of wheat stocks expected to be carried out of the current crop year continues to weigh on prices. The current estimate for 2016/17 suggests the highest carryout of all-wheat since 1987/88, representing 50.2% of annual use, while the February estimate of spring wheat ending stocks at 197 mb is down from 2015/16, but still higher than the five- and 10-year average carryout, representing 32.5% of annual use.

Five-year projections from Australia's government released Tuesday do not point to improving prospects for North American wheat production over the period, although a great deal can happen in five years or less. Their research shows a modest dip in global production of 2% in 2017/18 to 735 million metric tons, while global production is expected to reach 760 mmt by 2021/22. The study points to a lack of price incentives to produce wheat over other crops over the five-year period in countries such as Australia, the U.S. and Canada, while the stocks/disappearance ratio in the major exporting countries is expected to increase over the five-year period with stocks expected to rise faster than domestic use and exports. 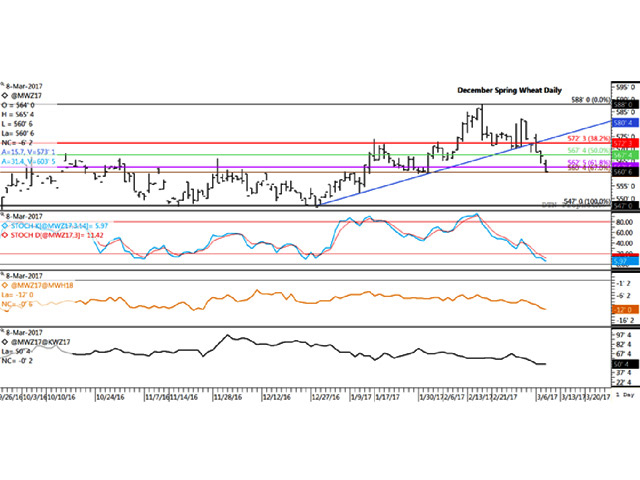