The Canadian Grain Commission's release of the Exports of Canadian Grain and Wheat Flour January 2017 shows Canada's cumulative licensed exports of canola at 5.449 million metric tons as of the end of January, up 13.8% or 659,500 metric tons higher than the same six-month period in the 2015/16 crop year.

Things are definitely moving in the right direction since the start of the crop year, with the earliest AAFC crop year export estimate pegged at 8.5 mmt, while its most recent estimate is 10 mmt, down only 295,000 mt or 2.9% from the record set in 2015/16. As of Thursday's week 30 data, covering the week ending Feb. 26, cumulative exports are reported at 6.9298 mmt, 9.8% higher than the same period last year, while it is 485,000 mt higher than the cumulative volume needed to stay on track to reach the revised target of 10 mmt.

One thing that jumps out from the August-through-January data is the catch-up shown in exports to China, as seen on the attached graphic. As indicated by the cumulative exports reported to China for each of the first six months of the crop year, we see that exports started at a slow pace early in the crop year. The late harvest was a factor, as was the dockage dispute with China that threatened to substantially cut shipments to that country prior to a September deal between the two governments that will allow for stable trade under expositing rules until 2020.

As of the end of January, countries showing year-over-year growth in volume of canola exported include France, Germany, Portugal, Israel, Japan, Pakistan, United Arab Emirates, Mexico and the United States, or nine of 12 countries listed.

In other Thursday news, the Canola Council of Canada has released a report titled Canola: Growing Opportunity for Canada, highlighting the crop's contribution to the economy. The total contribution to the economy is reported to have more than tripled in the past 10 years, with total activity said to add $26.7 billion to the Canadian economy. The bulk of this activity is in Alberta ($7.13 billion), Saskatchewan ($12.22 billion) and Manitoba ($4.16 billion).

What do you believe will be the biggest shift in seeded acres seen in your area in 2017? You can weigh in with your thoughts on this week's poll, which is found at the lower right of your DTN Homepage. 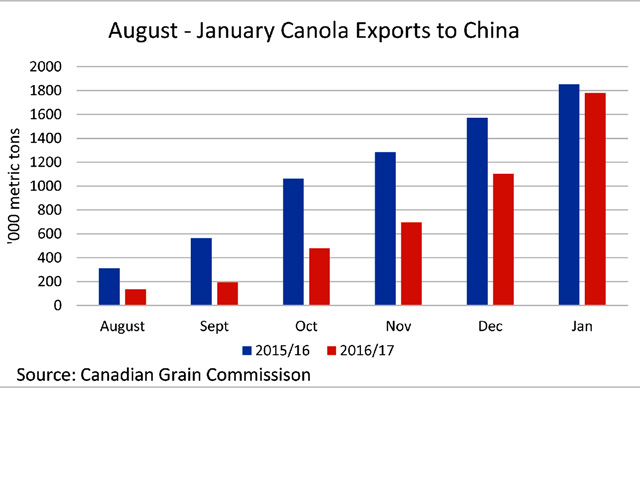