Grabbing further attention was DTN co-workers also making note of good sales of HRS to Canada. Hold the phone, did I hear that right? The most recent USDA sales data, as reported by the U.S. Wheat Associates, shows U.S. crop year sales of HRS to Canada totaling 261,000 metric tons, up 142% from the same period last year (yellow bar as compared to the red bar on the attached graphic). This is also well-above the total volume of 138,000 mt sold in the 2015/16 crop year and would be higher that total crop year sales for any given year since 2010/11, when sales totaled 576,000 mt.

This comes at a time when Canada's hard red spring wheat crop production estimate is 52.5% of the total estimated wheat production, which is down from 61.1% in 2015/16 and the smallest volume relative to total wheat production seen in Statistics Canada data going back to 1991, if not an all-time low. Another interesting point is that the weak Canadian dollar relative to the U.S. dollar would suggest this an in-opportune time to import U.S. wheat.

While these are simply sales that may or may not materialize into shipments, this bears watching. 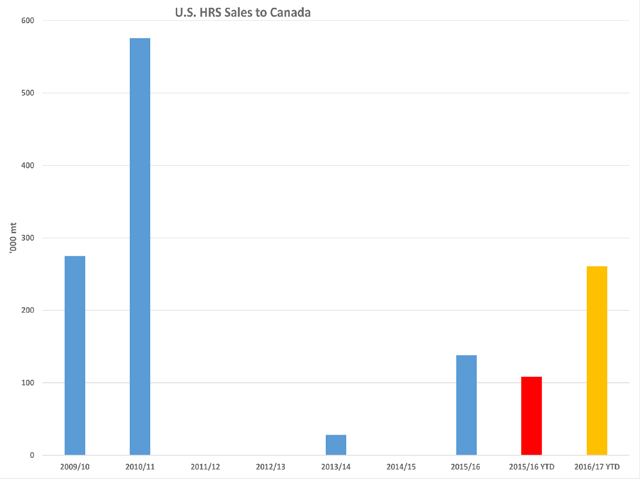