What a turbulent year this has been in agriculture! Farmers and ranchers have seen higher prices but also higher costs. They've watched as Washington mulls a dizzying array of proposed changes to farm programs and policies. The weather has been as freaky as ever.

All of which makes 2021 a good year to attend the DTN Ag Summit in Chicago.

This popular annual event, now in its 15th year, is always a great opportunity to make sense of recent developments and what they mean for your farm business -- to take stock of the past year and lay the groundwork for the next. Attending the Summit will be particularly fruitful in a tumultuous year like 2021.

The theme of this year's Summit is Power Up Your Business. It will be held Dec. 5-7 at the Fairmont Chicago, Millennium Park. The registration page and the agenda can be found at http://www.dtn.com/….

As usual, DTN's editors have put together a powerful program with a powerful lineup of speakers. This Ag Summit will provide answers to your questions about the forces that have been driving events in agriculture.

China has played a key role in this year's tumult. Its imports have driven prices of some ag commodities higher even amid continuing U.S.-China tensions.

Our kickoff speaker is the perfect person to talk China with farmers. Terry Branstad spent four years in Beijing as U.S. Ambassador to China. Farmers in Iowa know him better as the governor of their state for 22 years.

As the moderator of Ambassador Branstad's session, I know I'll have questions for him. Can American producers count on Chinese demand to continue strong? Is American agriculture becoming too dependent on China? How serious is the risk of military conflict between the U.S. and China? I expect the ambassador will have illuminating answers to my questions, and yours.

DTN Lead Analyst Todd Hultman has been one of the savviest observers of the effect of China on U.S. ag markets. At last year's Summit, held virtually, Todd outlined the need for better information about China's feed-grain supply situation and described some of the unconventional sources he taps for China insights. (https://www.dtnpf.com/…)

At this year's in-person Summit, Todd will share his outlook for ag markets and the factors affecting them, China included. I always find his presentations lucid and compelling. Sharing the stage with Todd to talk about the weather and its impact on markets will be Bryce Anderson, DTN's Ag Meteorologist Emeritus, and DTN Ag Meteorologist John Baranick.

One of the most intriguing but also bewildering developments in ag this year has been the proliferation of tantalizing talk about paying farmers to store carbon. It's a complex and controversial issue that has raised numerous questions. DTN's editors have assembled a panel of experts to answer them.

Some of the talk is coming from the government. Congress is debating a variety of "climate smart" policies, from new money for carbon capture to proposed larger payments for traditional conservation programs. Washington is also considering new competition rules and tax measures.

How likely are these changes to be enacted? What will they mean for farmers? At the Summit you'll hear from ag-policy experts like DTN's Ag Policy Editor Chris Clayton and Agri-Pulse's Philip Brasher, as well as DTN/Progressive Farmer tax expert Rod Mauszycki.

It's been a tumultuous economic year, as well, both domestically and internationally. Kanlaya Barr, John Deere's lead economist, will discuss the global macroeconomic outlook and how it will affect U.S. macroeconomic policy and trends in consumer behavior, all of which have implications for agriculture.

While the Summit focuses on helping you think through your farm business, it's not all business all the time. There's always an inspirational speaker, and this year it's Chad Greenway, a South Dakota farm boy who became an NFL star. He donates to hospitals helping children and families in need.

You will have lots of opportunities for networking. The program abounds with networking breaks, receptions and meals where you can meet and swap ideas with your peers. For many farmers, that's one of the best parts of the Summit.

And if you can spare the time, the Fairmont Hotel is walking distance from some of Chicago's best shopping, entertainment and culture. I always come a day early so I can spend a few hours at one of the city's many magnificent museums.

So please consider joining us. I look forward to seeing you at the DTN Ag Summit. 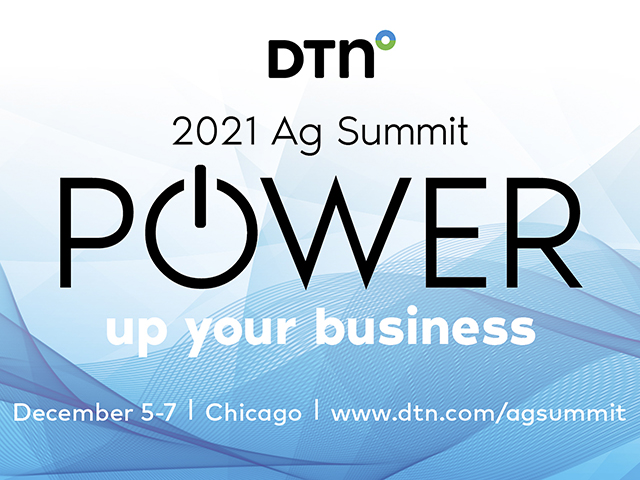