Following are a few highlight details from a special report published April 1, 2020 by the NOAA Central Region forecast office on the record wet year of 2019. This report focused on the record precipitation and impact in the Missouri River Basin. A later report will cover the Mississippi River Basin.

Precipitation in the Missouri River Basin varies widely across the region and throughout the year. Situated in the midsection of the country, the Basin encompasses much of the central and northern Great Plains, which is characterized by a pronounced east to west precipitation gradient. On an annual basis, eastern areas of the region receive nearly four to five times as much precipitation as western areas (with exceptions in the mountainous regions). Summer is generally the wettest season, while winter is the driest.

Trends indicate that Basin-wide precipitation has increased by about 8% since 1895. This is driven primarily by increases in the spring (14%) and autumn (14%). Precipitation changes are not uniform across the Basin, however, as eastern areas have experienced the greatest increases. According to the Fourth National Climate Assessment, precipitation is projected to continue to increase, particularly in the winter and spring.

Following are the Top 10 Wettest Five-Year Periods in the Missouri Basin. Statistics from the National Centers of Environmental Information (NCEI):

The Missouri Basin is in a much different situation so far in 2020 compared with 2019. As of April 3, 2020, no flooding was noted or forecast in the Missouri River valley itself. Flooding in the James River, a tributary of the Missouri, along with portions of the Mississippi River system and the Red River of the North was noted. However, soil moisture profiles are still at very high levels, so the evolution and occurrence of precipitation will continue to be closely watched through the spring season. 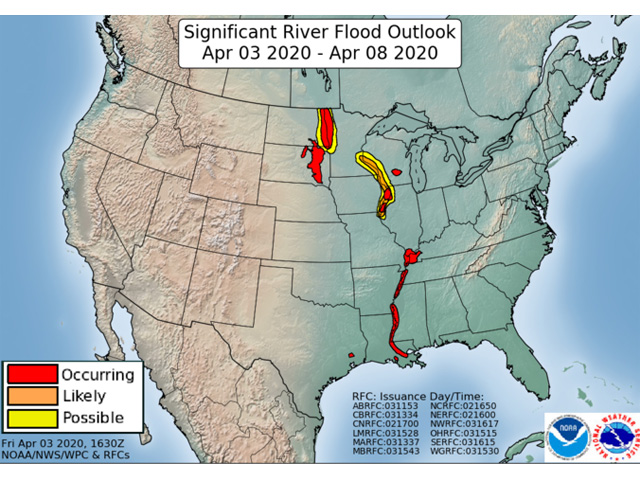