I am one of the many grain producers currently in the frustrating limbo of not having anything planted yet, but I'm also not sure whether exercising the prevented planting option of my crop insurance policy will ultimately be necessary. Each day it rains, my tension headache gets a little tighter.

After the past two years of drought in my local region (dust-scoured soybeans, grim pastures, dried-up watering holes, weird and spotty corn development), I don't like to get in the habit of complaining about rain. There are people in the flooded regions of the Midwest or the storm-battered Southern Plains (where over 6 inches of rain have fallen in past seven days) who may understandably have different feelings on the matter, but personally, I'm able to look on the bright side of this spring's unusually widespread distribution of wet weather -- there is no more drought in corn country!

It's been a long time since we could say that. In fact, in all the years of observations from the National Drought Mitigation Center at the University of Nebraska in Lincoln, there has never, until now, not been some pocket of "severe" drought somewhere in the continental United States. As of mid-March 2019, all the remaining pockets of D4 "exceptional" and D3 "extreme" drought were relieved by this year's precipitation. We can anticipate that in this Thursday's upcoming release of weekly data, there will be no more D2 "severe" drought. The one remaining patch of that condition -- 1,100 acres in northwestern New Mexico -- probably received enough rain over the past week to pull it out of that category. There remains some big patches of D1 "moderate" drought (70,000 acres) and also "abnormally Dry" conditions (in Washington, Wyoming, New Mexico, and Georgia), but there are no big grain-growing regions with alarmingly low soil moisture this spring.

That, in fact, is the definition of "drought" as indicated by the weekly U.S. Drought Monitor maps we've all become so familiar with over recent years. To be more than just "abnormally dry" (yellow) and officially in "moderate drought" (brown), the map makers must observe climate effects, including some damage to crops and pastures or low water levels in streams, reservoirs or wells. The designation is more sophisticated than simply a blind numerical result from observed precipitation. The mapmakers from various agencies consider not only past precipitation (or lack thereof), but also satellite data, vegetative health and ground-truthing from observers.

We've been on a long trend of improvement since the August 2012 peak of drought in the continental United States when the Drought Severity and Coverage Index was at its all-time high. In that month, 62% of the area was in some kind of drought, with 46% of the country in drought that was "severe" or worse and 188,000 acres were classified in D4 "exceptional" drought, with widespread crop and pasture losses and water shortages creating emergencies.

Now, however, pasture conditions across the United States are historically wonderful -- only 6% were rated either "very poor" or "poor" in the most recent Crop Progress report, which is an improvement from the week before and a sharp improvement over last year at this time. Most of the poor ratings came from either New Mexico or the New England states, where challenging hay land conditions this spring will add to the economic woes of the dairy industry. Note also that the Canadian Prairies are still experiencing widespread drought that's moderate to severe. Throughout the rest of cattle country, however, the industry looks forward to ample summer grazing and a chance to rebuild hay supplies.

The absence of drought is good; it's a good thing that people everywhere welcome. However, it's not the whole picture -- there can be too much of a good thing. They say, "rain makes grain," but that's only true if the seed is first able to get in the ground. The Drought Monitor maps don't show how extreme the non-drought has become in the Corn Belt -- i.e. how soggy and un-workable the soil is this spring. For that, we should consult the Palmer Drought Index map, which indicates the whole range of soil conditions, from extreme drought to extremely moist. Virtually the entire eastern United States is currently above the neutral midrange of soil moisture. The "extremely moist" category of Palmer Drought Index rankings stretches directly across the areas we think of as the Corn Belt: from Nebraska through northern Iowa, then Wisconsin, then Ohio, where only 9% of the state's corn crop has been planted as of May 19. Grain seed can't be planted where the soil is too wet to support planting equipment.

It's easy enough to understand how the market implications of widespread drought are unequivocally bullish, with a lack of moisture leading to stressed plants and lower yield expectations. However, the converse isn't necessarily true. The market implications of a lack of drought aren't necessarily bearish. Conditions that are too wet could lead to stressed plants and to outright acreage losses. Therefore, in celebration of the end of the years-long drought in America, I made up a new verse to farmers' least-favorite rhyme: 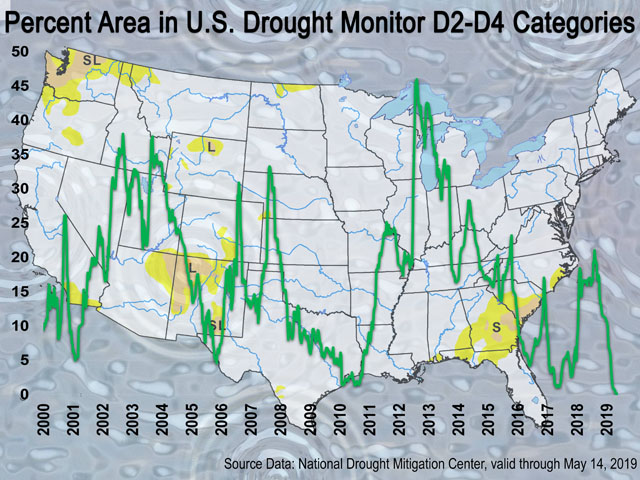