Corn planting in the Midwest remains well-behind normal, especially over eastern areas. Illinois corn planting stands at just 24% complete. Indiana is only 14% done. Ohio has a mere 9% of its corn acreage planted. Michigan is just 19% planted. On average, only two to three days were available for fieldwork during the week after Mother's Day.

Model guidance indicates no major change in this wet pattern during the next two weeks. The main features of this pattern are:

1) Blocking high pressure over the higher latitudes of North America. This keeps Canada cold. This causes a stronger-than-normal southern branch of the jet stream to set up over the United States due to the strong temperature contrast between the cold air to the north and the warm air to the south.

2) The southern branch of the jet stream is set up in a pattern that features a trough over the western U.S. and a ridge in the eastern U.S. Circulation around these two features allows a massive amount of moisture from the Gulf of Mexico to stream northward into the central U.S.

4) Energy out of the Pacific Ocean due to a weak El Nino ocean temperature pattern is also likely enhancing the wetness of this pattern.

In the small grains, planting progress for spring wheat in the Northern Plains has improved, but remains behind normal. With prospects for cool and wet weather, producers may struggle to get some acreage in the ground before moving on to corn and soybeans.

Heavy rains in the Southern Plains winter wheat areas will increase disease pressure on the crop and will affect the maturing crop and any early harvesting. Crop quality and harvest losses could be a significant issue this year.

In the eastern equatorial Pacific Ocean, our latest calculation of the sea surface temperatures for the first half of May was 0.9 degree Celsius above normal. This is the same departure as in April, with a weak El Nino indicated. 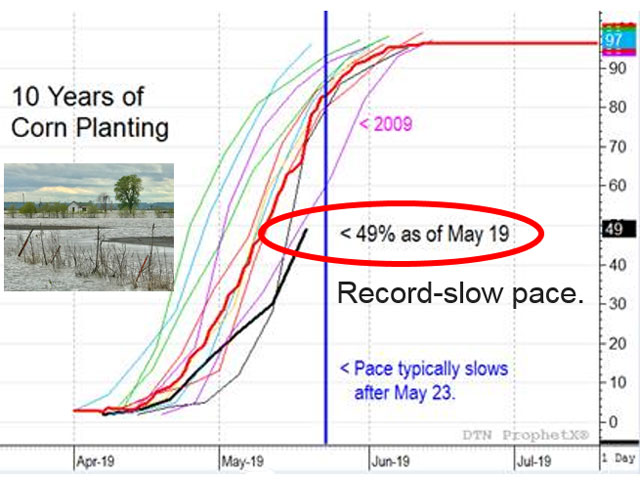