Frosts occurred yet again across southern Brazil this week. From Parana to Rio Grande do Sul, temperatures dipped below freezing three straight days from July 18-20. This comes roughly three weeks after a similar stretch of cold mornings with a couple of major differences.

The first difference is that the most recent stretch of cold was not as intense or expansive. The earlier period of frosts at the end of June had temperatures go below 30 degrees Fahrenheit (minus 1 Celsius) for wide areas of Parana, Rio Grande do Sul, and Mato Grosso do Sul. Frosts occurred as far north as southern Goias. This current stretch was much more limited, occurring from just Parana southward and temperatures just briefly touching below freezing.

The second difference is that second season (safrinha) corn was much more susceptible to frost in late June than it is now. Nearly none of the corn crop was mature and large sections were still in reproductive phases. Now, roughly half of the corn crop is still immature, but in the grain fill stage instead. And 30% of the crop has already been harvested. Corn that was able to escape the earlier frosts was at risk for damage this go around, but the frost likely had less of an impact.

Still, safrinha corn has gone through incredible weather challenges over the course of the season. We have talked about it at length, but from late planting to flash drought to frosts and freezes, producers who are able to get a decent crop are very lucky and mostly in Mato Grosso. Most producers elsewhere will have significant losses. Every time a new forecast for corn production has been made during the last several months, it has been adjusted lower. Then-record forecasts from February and March now will be several million tons below trend line. Forecasts are trending toward or below 90 million metric tons (mmt) for the total crop in the 2020-2021 year, down from the record 102.5 mmt a year ago and down from the USDA's record forecast of roughly 109 mmt earlier this year.

The significant losses during the course of the season will mean less exports to the global market. Exports could be down 20 to 30% over last year per reports, keeping prices higher for U.S. corn that is facing some challenges as well.

Rain can still have a positive impact on yields, but it is getting close to the end. The forecast is not favorable with continued dry conditions through the weekend. A front will move into Rio Grande do Sul on July 26 and move northward the following couple of days. Rainfall is likely to be more focused across Rio Grande do Sul than Parana or points northward. Winter wheat producers will likely enjoy the rains that come, but corn should be mostly too far along to have any appreciable benefit.

And behind that front it will be cold again. Temperatures may fall below freezing yet again for southern areas. Though at this point in the season, the frosts would have very little impact. The constant swing of above- and below-normal temperatures across Brazil is not favorable for winter wheat either. But vegetative wheat is much hardier this time of year and should be able to take the frosts as opposed to corn that is trying to fill grain.

Farther south in Argentina, frosts are fairly regular during the winter and producers are used to handling its occurrence. Soil moisture is also better in the country in contrast to its northern neighbor and the crop should be doing just fine thus far.

As we head into August, we will be looking more closely at temperatures and precipitation as the spring starts up, wheat becomes more active, and producers get ready for the new soybean season that starts in September. Last year was a record year for soybeans despite the delayed start. I think most producers that double-crop soybeans and corn will deal with a lower output of soybeans if it means a more normal crop of safrinha corn. 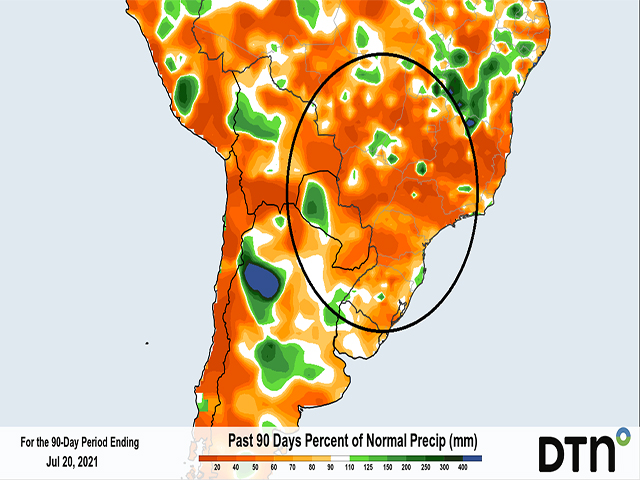