The first factory tour I ever had was in grade school. My class went to a General Motors assembly plant in St. Louis. It was a loud, dark, dangerous place. No robots were in sight.

In the last 20 years, I have been on factory tours on three continents and seven countries. For the most part, those factories were quieter, better lit and safer than the GM plant half a century ago. In the case of John Deere's tractor factory in Mannheim, Germany, for instance, no earplugs are required and a sign last week boasted more than 2 million manhours since an accident there caused lost work time.

And they are filled with robots, some with names.

This is the last installment in my Factory Tour Junkie series. It centers on a Deere factory in Bruchsal, Germany, which makes cabs for tractors and combines. I also visited Deere's European Parts Distribution Center (EPDC) on the same campus, which rivals any factory I've toured for a "gee whiz" experience.

Like its sister plant in Mannheim (about an hour away), the Bruchsal factory is populated with robots. They help humans build cabs to ship to Mannheim and other European assembly plants. At Bruchsal, they work to stay four days in advance of orders at the other plants.

Among the gee whiz sights that amazed this junkie was the paint section. It involved a series of 17 pools of liquid into which robots dunked cab frames. Acid, rinse, alkaline, repeat. At the end of the procession, the cabs get a black base coat. An electric charge and reverse polarity prevent "runny noses," said our tour guide Michael Schlieper. Then the frames get a John Deere green powder coat.

Robots do that job using polyester paint and an electrostatic process. Excess powder falls to the floor and is recycled. Schlieper said paint on the cabs is thicker than that on German cars.

Five humans work alongside the robots in the paint area.

Robots are so prevalent in Bruchsal in part because they can work faster. In the fuse installation area, for instance, a robot can fill a fuse box within four minutes. It would take a human 15 minutes to do the same work. The robot also checks for quality control as it installs. If it finds a defective fuse, it drops the part into a trash bin. This particular robot is devious. It occasionally intentionally leaves out a fuse to see if the human in charge will spot the omission.

An overhead rail system keeps things moving along in order. It has sidetracks so a computer can put the cabs in the proper order to ensure for their arrival at the Mannheim plant. Combine cabs go to a Deere assembly plant in Zweibrucken.

At the end of the production line, the cabs undergo an extensive verification involving 4,000 test points. One test uses an isolation room and high-pressure water jets. The sign over this room reads: "Dichtheitsprufungsanlage," German for "sealage testing machine."

Next door to the cab factory is the EDPC, 26 acres under room and temporary resting place for 275,000 different part types ... everything from toy tractors to wheels for 6R tractors.

One area is as long as a football field, 75 feet high and filled with 97,000 bins full of small parts. As they enter the area, humans step into transports and scan digital parts lists into a reader. The carrier -- about as big as an elevator car with protective screens but not walls -- then moves down an aisle and rises to the correct bin for the first part on the list. The picker retrieves a part, pushes a button and the carrier moves him to the next bin on his list. When the list is fulfilled, the carrier takes the picker back to the starting point and a new human picker enters.

Larger parts in the same area are stored in 27,000 wooden boxes. No human pickers are required here. Robotic pickers extract prescribed boxes and deliver them to a conveyor.

Running throughout the facility are shuttle robots, which carry parts from one area to another. When they were first installed, Schlieper said, the robots had numbers. But the human workers couldn't keep track of the numbers very well, so the robots now have names: Wall E, Road Runner and Speedy, for instance. "It helped with the human relationship," Schlieper explained.

The entire warehouse facility is "fully chaotic," Schlieper said. By that, he meant there is no pattern a human would recognize. Instead, computers allocate storage slots based on frequency of use -- not by alphabetical or numeric order, not by category and not by function.

If robots were to go on strike, humans could not find the part to fill an order. 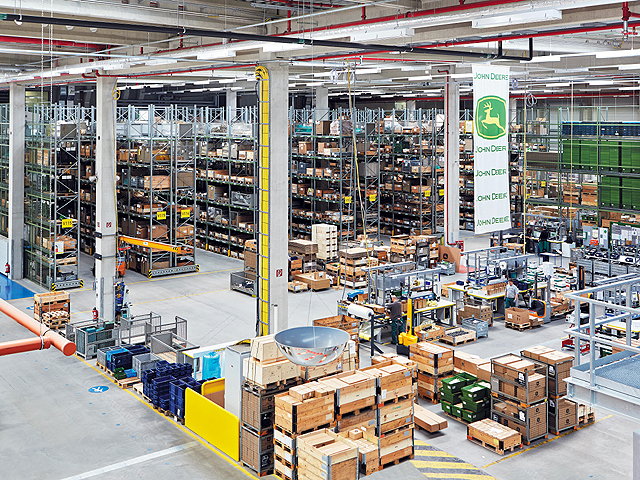