During an Executive Committee meeting for the International Federation of Agricultural Journalists, the same topic opened and closed the meeting: the war in Ukraine.

For the 30 people from 25 countries around the world who were on the Zoom video call Wednesday morning, it was a mix of time zones and accents. Yet, during the meeting, the world became one, especially when Ukrainian agriculture journalist Lurii Mykhailov spoke to the group near the meeting's end.

Questions from the group about Ukraine's ag journalists, farmers and crops showed how people cared, no matter where they lived, about what was going on. For many Europeans on the call, they feel like it's in their backyard -- and they are worried.

When asked how things are in Ukraine, Mykhailov replied, "Somewhat complicated at the moment."

Mykhailov noted the fighting is actively continuing, such as in the east and south, although for the western and central part of Ukraine, "The situation is somewhat calm, no more bombs or rounds of shelling."

Mykhailov added the Russians are attempting to take the whole southern corridor, which will affect Ukraine's ability to move ag exports. Making it worse, Russia is working to destroy railroads: This stops exporting ag commodities out of Ukraine as well as stopping supplies coming into the country.

When asked about the farmers and crops, he said it's estimated that this year's crop for Ukraine will be 70% or less of last year.

"The biggest problem's not volume, but with the exports -- all Ukraine ports are blocked or under Russian occupation," he explained. Some ports are already heavily damaged. Odessa's port is one of the latest to be shelled and targeted with long-distance missiles.

As Ukraine considers sending its grain exports through other countries to get to ports, it faces more challenges: Railroad capacity is very limited, especially with damage on the lines or routes being blocked. Some of the countries that may have been considered to help Ukraine export crops are Romania, Italy, Poland or Latvia, "But capacity of the railroad is very limited," he repeated, adding that if the ports are not unblocked soon, it will be a big problem. He added other nearby countries are also concerned, such as Moldova, which is only 100 kilometers (about 60 miles) from Odessa.

The questions continued from his peers.

Are people safe anywhere there? "It's dangerous everywhere in Ukraine," Mykhailov emphasized, adding that missiles are being sent all over Ukraine. "They launch missiles from the Caspian Sea, the Black Sea, from Russian territory. There is nowhere absolutely safe."

Are farmers getting their crops in? Mykhailov explained that as Ukrainian farmers sow their crops, or when they begin to harvest their winter crops, they face problems: A big amount of the land is mined and dangerous.

"We all here in Ukraine are very grateful with everybody who helped us in this tragic moment," he said. This ranges from military help, to medical supplies, to moral support.

How things have changed in the world from a few months ago, when IFAJ's Executive Committee had last met by Zoom.

When she started Wednesday's meeting, IFAJ President Lena Johansson, from Sweden, noted the year had started to look brighter in January after a couple years of COVID. But then, a few months later, there was Russian aggression against Ukraine.

"We can only imagine what ordinary life has become for our Ukrainian colleagues," she said, adding later how "we were horrified by the Russian invasion in Ukraine."

As Wednesday's meeting concluded with Mykhailov's comments, his fellow journalists from other countries said they hoped to see him and other Ukrainian journalists at the next IFAJ annual meeting, being held in Denmark this summer. He was hopeful a few could make it.

However, there is also reality: For now, there are no flights from Ukraine and no idea when they will resume, Mykhailov said. It is uncertain if people will even be able to go by train or bus to cross the border and find an airport in another country.

For now, many of the ag journalists and communicators are like other Ukrainians -- focusing on surviving a devastating war on their country.

On March 10, IFAJ -- on behalf of its more than 5,000 members internationally in 56 national guilds and associations, along with three affiliate members, who embrace freedom of the press -- issued a statement to express its concern: "Because Ukraine is a major producer of food and livestock feed, as well as a leading export hub, suppression of the nation's media and restriction of reporters' movements and free expression can have destructive impacts on a global scale.

"The spring planting season should begin soon in Ukraine. Farmers, advisers and traders need news, technical insights and economic information to avert additional humanitarian crises in the country -- lack of access to food or even famine -- as well as global shortages of agricultural products and inputs. IFAJ vigorously urges an immediate end to attacks on Ukraine's population, including our colleagues in the media and communications fields, and a resumption of the free flow of news and information," the statement concluded.

In IFAJ's quarterly newsletter that just came out last week, Johansson wrote about the dangers journalists face, physically as well as facing propaganda that's part of a war: "Unfortunately, there are still a lot of other places where there is no freedom of the press and where journalists are suppressed, threatened, and even murdered. 46 journalists were killed in different parts of the world last year, and several journalists have already been killed during the Russian invasion in Ukraine -- not to mention all civilians, even children, who get killed every day.

"This is of course a horrific situation for our Ukrainian colleagues, and it feels hopeless for us as an organization not to be able to help beyond issuing statements like the one we drafted shortly after Russia invaded Ukraine," she wrote. "But I'm sure we can contribute as individuals, by, for example, sending some support to Reporters Without Borders or other aid organizations and by writing about the war and its effects.

"Words and information are important weapons."

On World Press Freedom Day on May 3 this year, those words are more important than ever. Even if it starts with a Ukrainian ag journalist talking about a war in his country to a virtual room of agricultural journalists and communicators.

Editors' Note: Elaine Shein is currently serving on IFAJ's Executive Committee as the representative for the United States on behalf of the Agricultural Communicators Network. 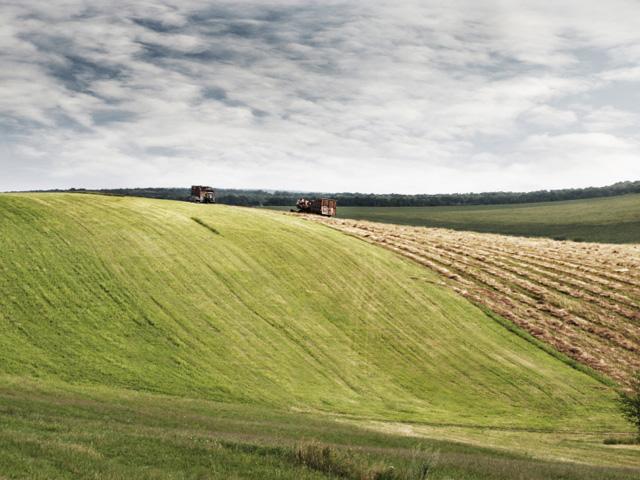