The National Farmers Union on Wednesday rolled out a campaign, "Fairness for Farmers," seeking to raise the visibility of issues around corporate consolidation in agriculture and pushing for reforms at the state and national level on to highlight competition issues.

"There is increasing recognition that monopolizing power across our economy has reached a peak. Corporate consolidation is a threat to the American way of life and democracy itself," said Rob Larew, president of NFU. "Despite these threats, renewed attention to these problems give us hope."

Larew added, "This campaign, Fairness for Farmers, is about ensuring that we have a clear and open competitive marketplace."

On a virtual press event, Sen. Jon Tester, D-Mont., spoke with NFU on the topic, noting he is "the only actively engaged working famer in the United States Senate." (Sen. Chuck Grassley, R-Iowa, may dispute that claim)

Tester highlighted western droughts and floods in the lower Mississippi River. While commodity prices are as strong as they have been in the past decade, Tester pointed to low prices and scarce labor as a "recipe for disaster for folks who feed our country." Still, "maybe the biggest threat facing rural America is the ongoing consolidation we've seen over the past few decades."

Tester said, "It is far past time to start dealing with it."

Tester cited multiple pieces of legislation he is working on, including introducing last week the "American Beef Labeling Act" with Sens. Cory Booker, D-N.J., and Sens. John Thune and Mike Rounds, both Republicans from South Dakota. The bill would re-establish mandatory country of origin labeling for beef. If passed, the U.S. Trade Representative would work with the Secretary of Agriculture to find a compliant mandatory label that would pass muster with World Trade Organization rules.

"It's going to give consumers the information they need to help control what they buy at the stores," Tester said.

Tester later added, "The last thing the packers want to do is actually label meat because, quite frankly, what's going on right now is we're bringing in meat from other countries and we're putting USDA labels on it, and people think it is USA product and it's not."

Tester also has another bill with Rounds and Sen. Chuck Grassley, R-Iowa, that would create a special investigator with subpoena power in USDA to work as a watchdog looking at the meatpacking industry.

Walter Schweitzer, president of the Montana Farmers Union, said consumers saw some of the challenges with resiliency that hit the food industry last year when meat and dairy cases were empty while producers were euthanizing livestock and dumping milk down drains. Schweitzer pointed to President Joe Biden's executive orders on competition to potentially lead to action against highly consolidated industries.

Gary Wertish, president of Minnesota Farmers Union, pointed out some of the same concentration farmers are facing now led 100 years ago to Congress passing the Packers & Stockyards Act. During the pandemic, packers have had to retool their plants because of worker illnesses, but the plants were refurbished to help the bottom lines of shareholders, not livestock producers. Cattle producers have continued to sell sometimes at a loss while packers have seen $1,000 to $1,800 in profit on those same cattle.

"That not only hurt the farmer, but it has showed up in the marketplace for the consumer with a significantly higher prices," Wertish said. "That money didn't end up back in the farmers' hands or back in the rural communities"

The decline in farmer numbers isn't just about technology, Ellison said, but also a market structure that is unfair to family farmers, as well as consumers and the environment. "So much national policy is done in the name of family farmers, but so much of the action that we take is in favor of big industrial producers who are seeking to corner markets."

DTN asked Larew whether Congress will update the Livestock Mandatory Price Reporting (LMPR) law this year, or simply extend the law as was done a year ago. If Congress cannot update the LMPR, can it make more reforms to concentration issues in the packing industry?

Without speculating on whether LMPR will be passed, Larew said, "The bigger piece here is both the Senate and the House continue to look at all of the pieces surrounding this. I think the fact and the argument in the discussion right now is not just an extension of this, but ways to improve it, building on many of the recommendations out of the livestock and cattle meeting that took place in Phoenix with all of the groups, including NFU."

That meeting among a small number of key groups came out with some recommendations last spring to Congress to pass LMPR with some improvements, including adding a library for contracts. The leaders of the American Farm Bureau Federation, National Cattlemen's Beef Association, National Farmers Union, R-CALF USA, and the United States Cattlemen's Association issued a joint statement in mid-May with their frustration over repetitive issues that plague the industry - "packer concentration, price transparency and discover, packer oversight, Packers and Stockyards Act enforcement, level of captive supply and packer capacity." Those groups also called on the Department of Justice to release the status of the department's investigation into the packing industry, but DOJ so far has remained silent.

Asked Wednesday whether other groups are on board, Larew said other agricultural groups are seeing the same issues, but NFU is "going to step up because our members want to see change. We have conditions right now which are unfair and that we need to seek to change, and we plan to do that. We will step out there."

More details about the campaign can be found at NFU's Fairness for Farmers website: https://nfu.org/… 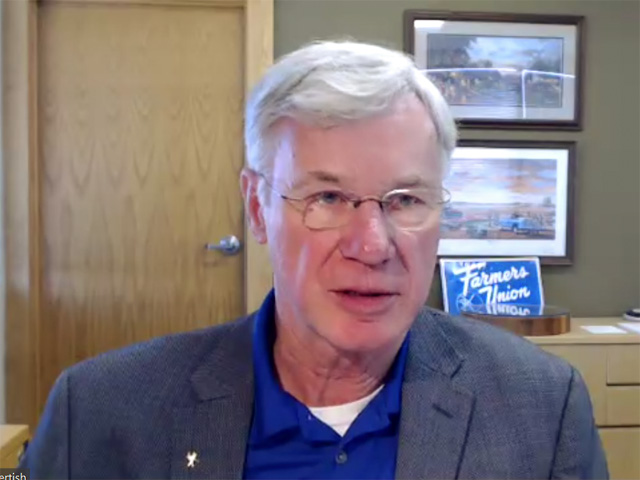