In 2000 Kooistra Farms hired an all-immigrant workforce to operate its dairy.

"Our decision to sell the cows in 2018 was in part because we were worried about losing our workforce," Linnea Kooistra told the committee during a hearing on proposed legislation to reform the immigrant labor system.

"The atmosphere regarding immigrants in the workforce was hostile. We knew we could not run this business without them, and at our age, we decided to sell the cows. This was a very difficult decision for us after a career doing what we loved."

With growing attention on illegal border crossings from Mexico, senators on the committee held a hearing on companion legislation to the Farm Workforce Modernization Act of 2021 that passed the U.S. House of Representatives. The House bill does a number of things to include a cap on the number of year-round visas and provide a path to citizenship for immigrant workers.

Republican members of the committee used the hearing to highlight issues with the southern border.

During the hearing, ag-labor issues often took a backstage to border-security politics.

Sen. Ted Cruz, R-Texas, called for the committee to hold a hearing on what he said was a "crisis" at the border.

"It is getting worse, in my home state of Texas on the southern border we have seen over a half million illegal crossings this year," Cruz said.

Cruz added, "I'm hearing from people all across Texas, go to south Texas talk to mayors and by the way, talk to Democratic mayors on the border that are dealing with hundreds of thousands of people coming across, talk to farmers and ranchers who are dealing with coyotes crossing their land on a daily basis trafficking people, trafficking drugs. Instead we have a hearing with the secretary of agriculture. Mr. Secretary, if we were having a hearing on the optimum fertilizer for growing corn, I think you might be a very good witness."

U.S. Secretary of Agriculture Tom Vilsack said the future prosperity of American farms depends on their ability to hire workers.

"The average age of the American farmer today is nearly 60 years of age," Vilsack told the committee. "And many of these farmers are now trying to determine what they do next in terms of the next generation. If they don't feel that they have access to additional workers they may constrain the size of their operations and at the end of the day, those operations may not be as profitable. They may not be able to support as many families as necessary."

Vilsack said farms and ranches lose an average of about 2,000 acres of land each day. Without the ability to find enough farm labor, he said, family farming operations may be forced to sell land and reduce agricultural activity.

"So that would probably potentially see an acceleration of that, and ultimately over time, if we don't deal with this issue and don't provide stability" to the ag-labor market, he said.

At least some of the problems with finding ag labor have centered on the H-2A visa program for guest workers.

Five states typically dominate the numbers of H-2A guest workers -- Florida, Georgia, California, Washington and North Carolina. Those states account for about 55% of all H-2A jobs. For many farmers and states, H-2A isn't well-suited for their labor needs.

Ontario, Oregon, farmer Shay Myers operates an asparagus farm that has experienced hardship in employing immigrant labor. Myers said his farm lost its entire crop this past year, because the farm was unable to hire domestic workers when it had 36, H-2A guest workers delayed entry at the border and arrived 90 days too late.

"We lost nearly 300,000 pounds of asparagus," Myers told the committee. "I had to go online and give it away to any food pantry or family that was willing to come out and harvest it. It's not safe because if we can't get workers, we can't harvest the crops. Sure, we could switch to mechanized and low-labor crops like corn, soy, barley and wheat, but it's not the best use of our nation's water, soil, and other resources."

Since 1994, more than 90% of all U.S. asparagus production left the country. "I still grow asparagus, but I can't hold on for much longer if we don't have a workforce and immigration policy that works," he said.

Sen. Charles Grassley, R-Iowa, and ranking member on the committee, said there are a number of steps lawmakers can take to improve the ag-labor situation.

He said the H-2A guest-worker program should be reformed to ensure agriculture has access to a "stable and legal" workforce.

"I consistently hear from employers in my home state, about the need for Congress to improve their ability to get access to labor," Grassley said.

Vilsack said H-2A reform also should include a simplification of a "cumbersome" process that requires a lot of paperwork.

"The reality is timing matters, timing is everything in agriculture," Vilsack said. He added, "If you don't plan at the right time, if you don't harvest at the right time, it impacts and affects the quality of what you produce, and that in turn impacts the price that you get in the market. It allows farmers and ranchers and producers to plan expansion opportunities, allows them to be as efficient and as profitable as possible."

Jen Sorenson, president of the National Pork Producers Council, told the committee the U.S. pork industry faces a "serious labor shortage," which is hurting both farms and processing plants.

"As any pork producer will tell you, there is no pork season," she said. "U.S. pork production is a seven-days-a-week, 365-days-a-year effort. It requires a hardworking and dedicated workforce on our farms and in processing plants. There is an increasing need for employees throughout the pork supply chain, but there has been a steady decline in rural population growth, where most farms and harvest facilities are located."

"Current visa programs designed for seasonal agriculture such as the H-2A visa fail to meet the workforce needs of U.S. pork producers and other year-round livestock farmers," Sorenson said. "While the H-2A visa program has helped some agricultural sectors, U.S. pork production and other livestock farming is not seasonal and thus is ineligible to use the program. Now more than ever, we need a dedicated, year-round workforce."

"After switching to an immigrant workforce our lives became much easier," she said. "Our people were loyal, dedicated workers. I am here to tell you how essential these workers are to all dairy farmers, and critical to our nation's food supply." 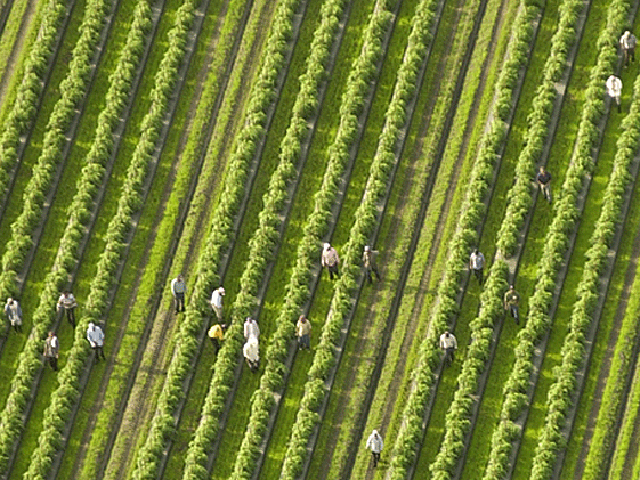