Joe Stone, Cargill's executive vice president for the agricultural supply chain and corporate trading strategy, said China has recovered from African swine fever quicker than expected. While that is starting to slow pork exports to China, it has ramped up soybean exports. Stone sees more positive soybean markets over the next 12 to 24 months.

"We've got a significant crush business in China. We also have a very large animal feed business in China and that recovery has really exceeded our expectations," Stone said on a web event led by the U.S. Soybean Export Council.

Jim Sutter, USSEC's CEO, also noted the growing trend toward sustainability and transparency in how products are grown, which hasn't translated so far to trade. "When you really look at how global commodity flows are taking place and that sort of thing, sustainability doesn't really seem to be impacting that -- at least yet," Sutter said, asking Stone about how the drive for more sustainable products is playing out.

Sustainability and climate change "are the issue of our time," Stone said, adding that Cargill's customers are asking about more solutions to climate change. Most of the time, though, "there's really not an incremental premium to the companies that we're selling the ingredients to." Stone said he thinks the market will evolve over time beyond a few segregated supply chains into a broader market.

China represents 60% of world trade on soybeans and about 65% of U.S. soybean exports. Stone noted, "And today, there's not a value being placed on sustainability there. It's more about food security." Stone added, "We really can't underestimate the importance of the Chinese market and we're geared to serve that."

On the other end of the spectrum is Europe, which is a much smaller percentage of world soybean trade. European Union buyers and policy are trending toward more accountability for food and feed imports that reflect a smaller environmental footprint. In this space, Cargill is working with about 750 U.S. farmers involved in 12 different programs over about 300,000 acres. Stone highlighted a project in Nebraska in which Cargill, the Nature Conservancy, McDonalds and Target are working with Nebraska farmers who are adopting soil-health practices to help mitigate greenhouse-gas emissions.

"So I would throw all of this together and say there are some really interesting opportunities for our farmers to participate in a green future, and we really do believe that carbon credits -- if we can make it easy for farmers to experience the value -- will be a big part of that," Stone said.

Stone reiterated a theme that farmers want the opportunity to join carbon markets, but the paperwork and certification process can't become a burden. Sutter added he thinks U.S. farmers have a competitive edge in that area.

The biodiesel industry could see gains tied to low-carbon fuel standards, Stone said. He pointed to the incoming Biden administration and the closely watched Senate races in Georgia as indications that low-carbon standards could become a bigger policy focus. Such policies could put more pressure on commodity prices as well, he said. Cargill's customers that import a high volume of vegetable oil, for instance, are trying to assess the impacts of more oilseeds going for fuel.

"Low-carbon standards are gaining momentum and they have a lot of traction," he said. "I think it's going to create really strong demand growth that will eventually put pressure on those low-carbon fuels feedstocks, whether it's cooking oil and things like that, and then vegetable oil is absolutely going to be needed to fill in the feedstock supply gaps."

Most of the country, though, does not have a low-carbon fuels standard so assessing the possible consequences is in the early stages. "But in general, I think we all have to be optimistic about that demand and more optimistic about low-carbon fuel standards gaining momentum beyond the states of California and some of the other early adopters," Stone said.

Looking at 2021 overall, Stone pointed to the weather impacts on the South American crop, but Cargill also sees a lot of optimism for a demand-driven market with recovery in areas such as food service. Central banks globally also are providing a lot of liquidity to companies and preparing for a curve in the decline of COVID-19 once vaccinations rise. That's going to lead to a lot of "pent-up demand" in travel and eating out, he said.

"And I do think it's likely that we see a bit more inflation than we've seen in quite a while," Stone said. He added, "We know it's going to be a bumpy ride -- it will be a bit of an uneven ride -- but we look for a much, much, much better '21, and the demand for what we do to improve quite a bit." 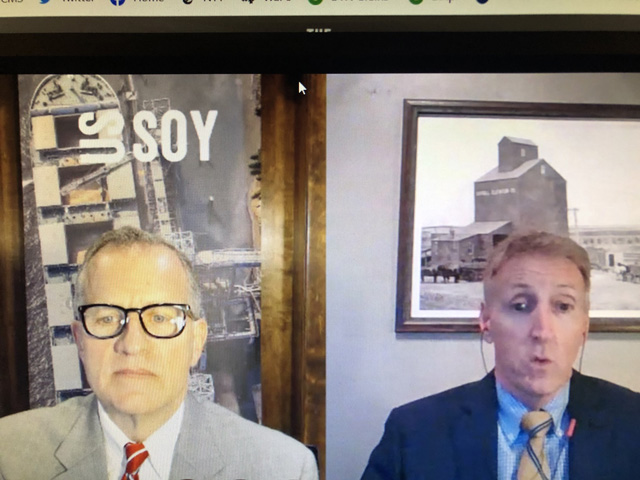