SAVANNAH, Ga. (DTN) -- Agriculture Secretary Sonny Perdue took time after a speech at the National Farmers Union annual meeting here on Monday to better understand the volume of growth in new produce imports at the Port of Savannah.

The Port of Savannah has seen an explosion of produce imports from Central and South American countries over the past couple of years. That has translated into a greater need for USDA inspectors to work along with U.S. Customs and Border Protection at the port.

Produce imports at Savannah have gone from basically zero two years ago to about 7,000 20-foot equivalent unit (TEU) containers in fiscal year 2019. A temperature-controlled warehouse built several years ago has become a destination for fruits and vegetables.

The business move made sense because there were few ports in the south Atlantic servicing the southeastern mid-Atlantic population, said Griff Lynch, executive director of the Georgia Ports Authority. "It's growing by leaps and bounds," he said.

Lynch pointed out that cold storage at the port has been growing with a major facility being built by a cold-storage company that will give the port about 1.5 million square feet of cold storage once completed.

The cold-storage containers used to ship produce also provide a little more volume of empty space for poultry exports that come out of Savannah, which also need cold storage to ship, Lynch noted. The Port of Savannah is responsible for 45% of all poultry exports out of the U.S., making poultry one of the biggest agricultural exports coming out of the port. Last year, poultry accounted for about 70,000 TEUs, Lynch said.

"It helps on the poultry side because our goal is to increase our inbound refrigerated containers, so that hopefully matches up with the exports from the poultry side," Lynch said. "So it ultimately helps both customers operate more effectively. There are other markets that could open up, such as South Africa, that would like to send produce this way as well."

Poultry exports potentially will get a boost from China announcing late last year it would lift the 2015 ban of poultry imports from the U.S. China banned U.S. poultry during the highly pathogenic avian influenza outbreak. Before the ban, the U.S. exported roughly $500 million in poultry to China. Today, the USA Poultry and Egg Export Council projects the market for chicken feet alone amounts to $835 million per year. About 50,000 pounds of poultry feet from Georgia were sent to China in January.

Lynch highlighted the prospect for greater poultry exports out of Savannah. "And we think that with the phase-one tariff deal happening -- assuming everything goes back to normal again over there -- we should see a significant increase on the poultry side," he said.

Perdue noted the success of poultry coming out of the port as well.

"More poultry protein goes out of Savannah than any other port I'm aware of," the secretary said. "It was very critical as we built the port infrastructure to handle freezer space."

The coronavirus outbreak in China has rocked global trade and world markets at the moment, but it could create even more opportunity for poultry exports as trade begins to stabilize. DTN's China correspondent reports that a recent survey in China shows that only 63% of the feed companies are back to operating but not at full speed, as they lack workers and raw materials.

Hubei Province, which is the hardest-hit part of the country, also typically raises more than 100 million layers and 350 million broilers, making Hubei the sixth-largest poultry-producing province of China. Most of the poultry farms prepared feed enough for Chinese New Year holidays, said Lin Xu, a feed distributor in south China. "But, they did not expect this disaster after the new year. Only 70 out of the 340 feed mills are operating in the province now."

More than 100 million of young chickens have had to be slaughtered and more than one billion eggs are reportedly piled up on the farm," Lin said. He added that breeding companies have been killing their day-old chicks because they cannot ship them to farmer growers.

One of the reasons Perdue said he was touring the port was to ensure the USDA Animal and Plant Health Inspection Service has the ability to handle inspections and control invasive pests as the port increases produce imports.

"So that's one of the things we are asking about -- what is the cold chain infrastructure here inbound and outbound," Perdue said. "That's vital because we use cold temperatures at freezing to make sure we don't get unwanted riders such as pests and things like that."

On his tour, Perdue took part in an inspection of pineapples from Costa Rica with a customs agent who showed Perdue how inspectors use lighting to examine individual pieces of produce for possible invasive species. Perdue then held a brief press conference in front of a container ship with a new set of cranes loading the container ship.

Perdue said USDA wants to match up its inspection capacity with what the port has been designed to handle for the growing produce import business. He pointed out the port has expanded cold-storage and handling facilities that can ideally "freeze out" invasive pests.

"This is a developing industry here in the Port of Savannah," Perdue said. "This will allow other fruits and vegetables to come in here with the capacity of a cold treatment, as required by USDA for pest elimination."

The secretary said he met with both customers at the port about USDA inspections, as well as staff from Customs and Border Protection and USDA's Animal and Plant Health Inspection Service.

"We want to make sure we are as efficient from a regulatory perspective as the port is from a handling perspective," Perdue said. "It works best when the regulators don't impede the efficiency of a port operation. That's our goal here is to match up with the demand of what is being created here. We want to be safe and want food safety and control invasive species, but we want to do it in an efficient way."

Going back to Perdue's time as Georgia governor a decade ago, the port and state leaders have aggressively worked to dredge out the Savannah River to draw in larger container ships that can now pass through the third lock of the Panama Canal. Perdue pointed out the state has "put in its share of money" to expand the dredging depth to allow ships with as many as 14,000 containers to come into port.

Perdue credited President Donald Trump and the federal government for finally adding funds for a deeper draft in the port.

"Now we have the funding to get the dredging for those bigger ships to come in," Perdue said. "That's the future of container ships from across the world."

Ports have been working at different levels to dredge to deeper draft depths as ocean container ships have gotten larger. Just last month, the U.S. Army Corps of Engineers announced funding to dredge the Mississippi River to a 50-foot depth to allow larger container ships. 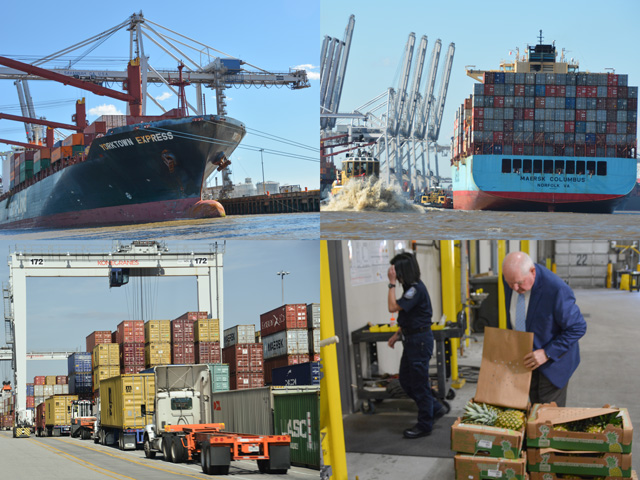