COUNCIL BLUFFS, Iowa, (DTN) -- After more than a year of stumping, and coming off the months-long impeachment battle against President Donald Trump, the 2020 election begins tonight in Iowa with its caucuses to choose the eventual Democratic nominee to face Trump.

A final poll from the Des Moines Register and CNN on Saturday was canceled after Buttigieg's campaign complained his name had been omitted, according to a supporter.

The impeachment has kept Sanders, Warren and Klobuchar bottled up in Washington, D.C., much of January, but all three hit the state in a rush over the weekend. Super Bowl Sunday didn't deter the candidates from holding large rallies in parts of Iowa as well.

"But if you think about that lesson from experience, I would argue what history has taught us in a moment like this is we cannot take the risk of falling back on an old playbook and rely on the familiar to deal with a fundamentally new challenge in this election" Buttigieg said.

Biden, speaking to the Waterloo Courier on Saturday, countered Buttigieg's case, saying that experience counts. "This is the one time in modern history where not having any experience with passing something through a complicated United States Congress, not having any experience in pulling together a nation on major issues -- why that is more of an asset than someone who's done it?" Biden said. https://wcfcourier.com/…

While the Iowa caucuses often eliminates candidates, it doesn't necessarily pick the eventual nominee. Four years ago, Texas Sen. Ted Cruz won the Republican caucuses. Mitt Romney, the 2012 GOP nominee, also lost the Iowa caucuses that year to former Sen. Rick Santorum. On the Democratic side, though, former President Bill Clinton in 1992 was the last Democratic candidate to lose Iowa, but still win the party's nomination. Al Gore won in 2000; John Kerry in 2004; Barack Obama in 2008; and Hillary Clinton in 2016.

As he is prone to do, President Trump drew attention away from Democratic rivals with a rally of his own Thursday night in Des Moines. Just as the president landed in Iowa, he tweeted poll results showing head-to-head races in Iowa with Trump ahead of all the major Democratic contenders in the state. The New York Times/Sienna College Research Institute poll showed Trump up on Biden by 2%; up 6% over Sanders; up 5% over Warren; up 1% over Buttigieg; and up 8% over Michael Bloomberg, who did not campaign in Iowa.

The poll results show that neither the three-year trade dispute nor the impeachment proceedings have turned Iowa voters against Trump, who carried the state of Iowa over Hillary Clinton by a 51.1% to a 41.7% margin in November 2016.

"USCMA -- all done, China -- all done, for the farmers, it's done, I can tell you. You're going to have to get bigger tractors and a helluva lot more land, because you have got to produce a lot of product. I don't know if you can."

He added later, "So we're going to win the great state of Iowa, and it's going to be a historic landslide, and if we don't win, your farms are going to hell, I can tell you right now."

Democrats have largely focused on agriculture in Iowa as part of their message on addressing climate change. Buttigieg again hit that message on Friday. "We need farming at the forefront to get this done and we shouldn't just be calling for it, we should be paying for it with federal policy to support our farmers in getting that done," Buttigieg said.

After Iowans caucus tonight, Trump will get another chance to make his case to the American people about his presidency with the State of the Union speech Tuesday night at the Capitol.

Trump also is determined to stalk the Democratic candidates. His next major campaign rally is set for New Hampshire on Feb. 10, the day before the state's primary. 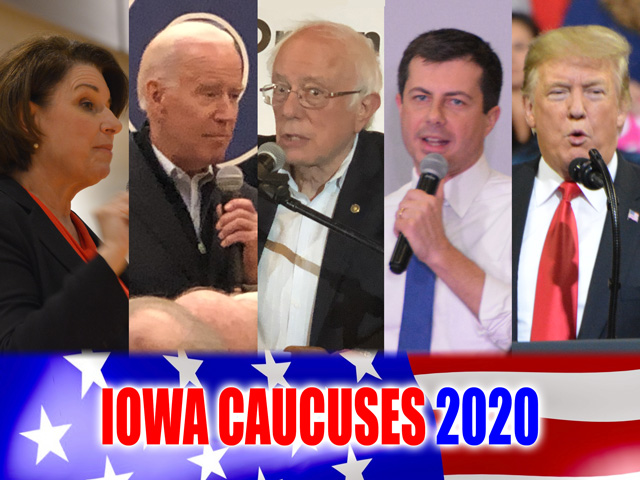