WASHINGTON (DTN) -- While the country awaits the impeachment vote expected late Wednesday in the U.S. House of Representatives, the leaders of major farm organizations are waiting for the House to vote on the U.S.-Mexico-Canada Agreement in a vote expected on Thursday.

Zippy Duvall, president of the American Farm Bureau Federation, told DTN on Tuesday that passage of USMCA in the House is the biggest issue for his organization as Congress closes out 2019. Duvall credited House Speaker Nancy Pelosi and U.S. Trade Ambassador Robert Lighthizer for reaching an agreement on the trade deal.

"It's so critical. We've been pushing hard for a year now. Our hats are off to the speaker, and Mr. Lighthizer and the administration to try to work together to iron out the differences," Duvall said.

The House Ways and Means Committee on Tuesday voted to advance the trade agreement out of committee, setting up a House vote on Thursday.

The trade deal will help agriculture in different ways, including more dairy and wheat access to Canada. U.S. agriculture already will export an estimated $135.5 billion, according to USDA. USMCA could tack on another $2.2 billion to agricultural exports, or roughly about a 1.6% increase.

Duvall agreed the deal doesn't drive a high volume of new exports, but the agreement provides assurances to producers that the two biggest markets for U.S. agricultural products will remain open.

"I think certainty is one of the words," Duvall said. "Modernization is another word here because a lot of the things that are being considered with USMCA weren't even a reality 20 or 30 years ago when NAFTA came into effect as far as biotechnology, some of the practices we've used."

While Farm Bureau has backed USMCA from early on, the board of the National Farmers Union "in a closely divided vote" chose last week to support the amended version of the trade agreement. NFU traditionally has opposed trade agreements and opposed USMCA's predecessor, the North American Free Trade Agreement.

Roger Johnson, president of NFU, told DTN in an interview on Tuesday that it was a controversial vote, but NFU supports the changes made to the trade agreement, especially when it comes to enforcing labor standards in Mexico.

"Significant changes were made to the labor provisions, and people say, 'Why do we care about labor?'" Johnson said. "Well, most farmers have off-farm income. You push all of these jobs out of rural America and it hurts agriculture too. Somebody often needs that job in order to farm."

The other big change to the trade deal was lowering the length of patent protection for pharmaceuticals despite lobbying from U.S. drug companies. Johnson said those changes go directly into issues regarding health care.

"If there is an issue from the day I was first elected ag commissioner, until today, the top of mind for almost every farmer, it's health care," Johnson said. "It's too expensive and the care is too inconsistent. The last thing they want is for the care to get more expensive."

Another issue that had sway with NFU's board was what is known as investor-state dispute settlement mechanisms (ISDS) that were stripped out of USMCA.

"These provisions gave these trade-attorney tribunals the authority to decide on these disputes," Johnson said. "To push that out of the deal gave a more effective process for that."

In addition to the changes to ISDS provisions, Duvall also pointed to some other modifications in phytosanitary issues. Duvall said those changes will help with future trade deals as well.

"A lot of that stuff sort of sets the mold to be cut and paste into future trade documents around the world," Duvall said. "That's some real important work that's been done, and we're excited to see that modernization. So I guess modernization is the best way to explain that."

NFU earlier had raised reinstatement of mandatory country-of-origin labeling for meat as one of the topics the group wanted addressed, and NFU also wanted to see tighter dumping provisions.

"Neither one of those issues were dealt with," Johnson said. "But we got three out of the five issues we were focusing on."

Johnson and Duvall both said the impeachment process is a battle for Congress, and they would continue focusing on agricultural issues and let Congress conduct its business.

Duvall added, "Every minute they spend on impeachment is a minute they could be working for the people of this country and especially our interests as rural America and farmers."

The U.S. Senate is likely not going to take up USMCA until after the Senate holds a trial on impeachment. Still, Sen. Debbie Stabenow, D-Mich., ranking member of the Senate Agriculture Committee, announced that she will support the trade deal when it comes to the Senate.

"This trade agreement will provide certainty for farmers who need a level playing field and markets to sell their crops. It will help open markets for wheat, poultry, and dairy farmers, Stabenow said. 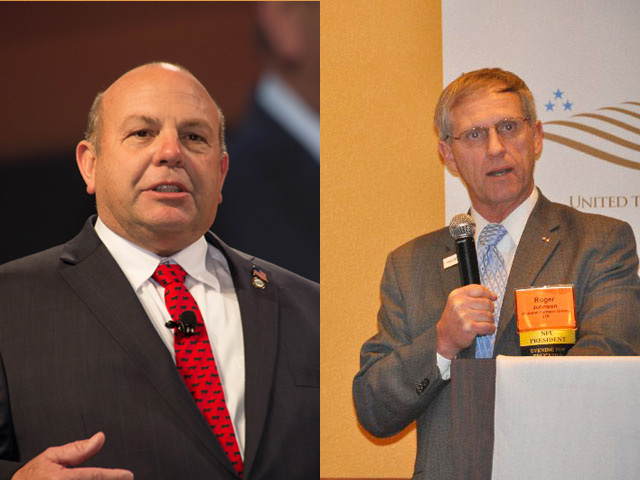