EMERSON, Iowa (DTN) -- While President Donald Trump focuses his ire on "the squad" of four liberal Democratic freshmen women House members, others such as Iowa Rep. Cindy Axne are trying to show constituents they are steering the House in a more moderate direction, especially when it comes to rural issues.

On Wednesday, Axne held events in southwest Iowa, including a tour of an ethanol plant.

Near Emerson, Axne visited the farm of Will Frazee, a district director for the Iowa Farm Bureau. Farmers asked Axne about ethanol, trade, climate change and anti-agriculture regulations and agendas.

"These are all issues that are top of the minds with producers in the area," Frazee said.

Axne won her seat along with 58 other Democrats who swept into the U.S. House of Representatives last year to capture the majority from Republicans. Axne won Iowa's 3rd Congressional District by 2.1% in 2018 over Republican incumbent David Young, who is running to recapture the district in 2020. Axne lost every rural county in her district in 2018, but her victory was carried by Polk County, which includes Des Moines and its suburbs.

Axne has been working ever since to shore up rural support, which included asking House leadership to put her on the Agriculture Committee. Axne pointed to Iowa ethanol going to California to meet the state's low carbon fuel standard as one reason for her appointment.

"I'm standing up and being loud and proud about Iowa," Axne said. "As a matter of fact, I do have a chance to travel around the country, and I'm talking about agriculture at every turn. I want you all to know there are people in this country who are absolutely interested in agriculture. They just don't hear about it very much."

Axne also expressed some frustration about trade disputes and the impact those are having on agricultural markets. "Quite honestly there are many days I wake up wondering, what hit are we taking now? This is out of control," she said.

Retired farmer Clint Rubey of Red Oak, Iowa, brought up the "free pass" given to small refiners by EPA. Rubey noted a lot of small refiners getting ethanol exemptions from EPA are actually owned by large oil companies. "Can't we get political somehow for EPA to change their attitude?" Rubey said. He added, "So there is still some kind of hocus pocus with the oil industry still going on to control the entire country. Can we do anything about that with legislation?"

EPA granted 31 exemptions last week, totaling 1.4 billion gallons. Axne put the exemptions in the lap of the president for allowing them to happen. "Quite honestly, I'm really disappointed with what the president has been doing," she said, adding that almost 80 small refinery exemptions have been granted under the Trump administration. "And you are absolutely right. Exxon is one of those companies. ... those people have made so much money and they are barely paying any taxes and yet we're waiving them out of the Renewable Fuels Standard while our farmers are hurting."

Lawmakers are calling for a further investigation by the EPA Inspector General, Axne said, because those lawmakers don't think EPA is following recommendations from the Department of Energy. The Energy Department generally details to EPA whether a refinery is actually facing economic hardship worthy of a waiver. Sen. Charles Grassley, R-Iowa, last month cited incidences in which EPA granted RFS exemptions that energy officials said were not needed.

"We already know the Department of Energy has not agreed to some of these refineries that were exempted, so there are questions within the system," Axne said. She added, "So it's hurting us now, and it's going to continue hurting us in the future."

Axne said at some point Congress "may need to step in" because EPA is not keeping with its mandate to protect the environment.

Frazee, who hosted the event with Axne, also stressed to the congresswoman the importance of getting the U.S. Mexico Canada Agreement (USMCA) done. Frazee said USMCA is needed to get the process going with Japan and other countries. "We just can't stress how important it is we get this done and the sooner the better," Frazee said. "We need the certainty."

Axne explained the Trump administration just sent the USMCA text to Congress right before the break. Negotiations are now starting between the Trump administration over issues with labor and pharmaceuticals. Axne stressed both those issues with the farmers, especially after Rubey said some farmers don't understand why they should care about labor standards in Mexico. Labor regulations are needed to keep from undercutting American prices, losing manufacturers to Mexico and helping reducing migrants from Mexico by improving wages in that country, she said.

"We don't want to have to be undercut in wages and have to go back to the drawing board again," Axne said.

A bigger problem in the trade agreement may be the 10-year patents on biological pharmaceuticals, Axne said, that will delay generic drugs coming to the market and continue to drive up prescription drug prices for Americans. Axne said "Big Pharma" is ramping up for a lobbying fight.

Still, Axne expressed confidence the House would approve USMCA, saying there is bipartisan support. "I think we're going to make it happen. All signs point to it as positive," she said.

"As I met with local farmers, they expressed their concerns related to the volatility of markets, trade uncertainty, the unreliability of high-speed broadband internet access, and the continued need to recruit qualified employees," Spanberger said. "But I also witnessed a tremendous amount of community spirit, family, and agricultural tradition, and these values continue to sustain our rural communities."

A more senior member of the House Agriculture Committee member, four-term Rep. Cheri Bustos, D-Ill., hosted House Speaker Nancy Pelosi, D-Calif., on Wednesday and met with leadership of the Illinois Farm Bureau, according to a news release. Bustos and Pelosi both criticized President Trump's policies in statements. Richard Guebert, president of the Illinois Farm Bureau, said it was productive to talk with both lawmakers about issues facing Illinois farmers.

"As we've seen our export markets shrink, farmers are anxious to see timely congressional action on the U.S. Mexico Canada Agreement, support for biofuels and a robust infrastructure package that repairs our aging locks and dams," Guebert said. "We left the meeting confident in the speaker's approach and in her determination to reach a strong agreement for our family farmers." 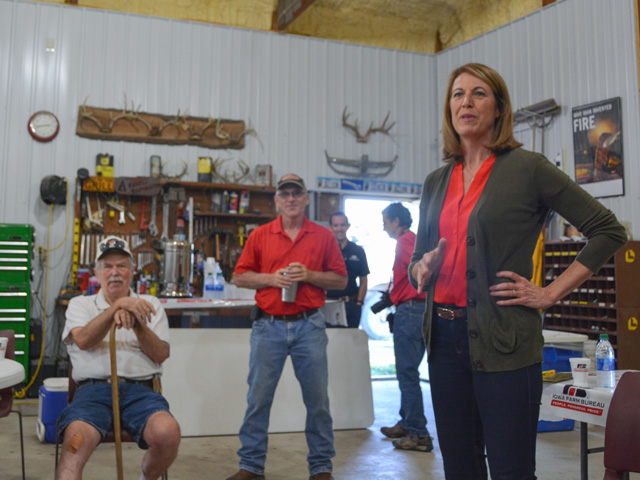