COUNCIL BLUFFS, Iowa (DTN) -- Massachusetts Sen. Elizabeth Warren stormed through the reddest part of Iowa over the weekend but discovered standing-room-only crowds on her three days of campaigning -- helped by abnormally mild January weather -- as she made a splash in visiting the first state of the 2020 Democratic nomination race.

The Iowa caucuses are less than 13 months away, and the primary calendar is more front-loaded than ever with California, Massachusetts and North Carolina pushing up their primary dates to a March 3 "Super Tuesday." By early March, a running list of nearly three dozen Democrats will be culled down to just a few possible contenders, and perhaps a single nominee.

The Democratic primary season is setting up to be the most wide-open race since at least 1992 with no single standard bearer, though former Vice President Joe Biden has yet to formally announce.

Warren, 69, is largely known as a liberal Massachusetts senator whose voice rose in the wake of the 2008 financial crisis as a consumer advocate who pushed for the creation of the Consumer Financial Protection Bureau. She's also known for claiming Native American heritage, which has been attacked by her opponents to the point she even got a DNA test released last fall showing "strong evidence" of some Native American ancestry. Still, President Donald Trump has branded her as "Pocahontas," and last week, Trump posted on Twitter a mock Elizabeth Warren campaign logo showing "Warren 1/2020th."

Before a crowd of roughly 500 people Friday night in Council Bluffs, Iowa -- 200 of whom had to stand outside -- Warren sought to reintroduce herself as an Oklahoma native and daughter of working-class parents who barely scraped by financially. Warren talked about her father, a janitor, getting injured and being unable to work when she was in middle school, and her mother determined that "We will not lose this house" as she put on her best clothes to go get a minimum-wage job at Sears.

Warren then stressed that her mother's job at the time supported the family.

Focusing on high costs of health care and college education, Warren also said Washington has increasingly tilted away from helping lower-income people rise up and instead helps the investor class. Washington now is dominated by successful corporate lobbyists, which Warren called "corruption, pure and simple." She said, "They work for the rich and the powerful and not the rest of us."

Warren didn't mention agriculture or ethanol across her initial campaign blitz, but she made a point of visiting rural areas such as Storm Lake, Iowa, trying to knock the notion Democrats ignore rural voters.

Iowa GOP tweeted of Warren that she "voted against tax cuts, supported @BernieSanders' $32 trillion Medicare for All plan, and has obstructed the President's agenda at every turn. Warren puts party politics over progress -- her far-left agenda would prove disastrous for Iowans."

Warren directly attacked the 2017 tax cuts in Council Bluffs as a "$2 trillion giveaway to corporations and billionaires."

The senator's fight is targeting President Trump's populism with her own progressive brand, but Warren did not mention Trump by name Friday night in Council Bluffs, and other reports noted a similar theme throughout the weekend.

Warren made a splash in western Iowa, the reddest part of the state. NBC reported roughly 3,000 people turned out for Warren's five events over the three days, "A testament to both her political celebrity and the eagerness among Iowa Democrats to get the race started against President Trump."

Students, nurses, teachers and retirees were among the crowd in Council Bluffs, which also drew Nebraskans who crossed the Missouri River for the event.

Jim Kennedy, a retired railroad employee in Iowa, said he didn't go to 2016 political rallies, but he wants to be more engaged this time around and see the different candidates. His take on Warren: "I like how she stands up to various factions and corporations. She speaks her mind." 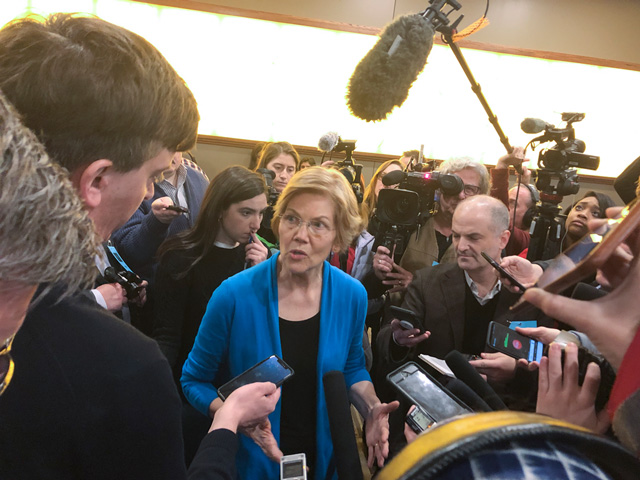