OMAHA (DTN) -- President Donald Trump and his administration may have succeeded in getting some kudos in agriculture this week with the announcement of a $12 billion trade aid package, the prospect of more soybean exports to the European Union and some encouraging talk on biofuels.

The White House made a major push to ease concerns among the president's rural base about the agricultural economy and found ways to keep up that push all week in different forms.

Among the major announcements this week were:

-- A $12 billion aid package announced by USDA for farmers on Tuesday. The aid will be split into three different prongs that will include direct payments in some form this fall to producers of major commodities, government purchases and distribution of food products to food banks and other aid, and more money for farm groups and agribusinesses to travel the world to sell U.S. commodities in different markets.

-- An announcement Tuesday by EPA to approve sorghum oil as a feedstock under the Renewable Fuel Standard as an advanced biofuel and biodiesel product.

-- A Wednesday press conference with European Commission officials on trade during which President Trump made it clear one of the big outcomes of his talks with EU officials is that they would buy more soybeans. U.S. officials also later added that the EU would increase imports of other agricultural products as well.

-- Trump informed an Iowa audience on Thursday that his administration is "very close" to approving year-round E15 ethanol sales. The president said he was "taking care of your ethanol" while showing off a green-and-yellow "Make Our Farmers Great Again" hat.

But even a big aid package this fall may not make up for the complications facing agriculture right now due to retaliatory tariffs reducing export sales in the middle of a five-year agricultural economic slump.

"If the tariffs stay on long term, that's not a solution," said Wally Tyner, an agricultural economics professor at Purdue University. "At times when farm incomes are tight and tariffs have brought them down further, that's certainly a partial remedy. But the White House has made clear this is a one-time deal and they will resolve the trade issues within a year."

Then there is the risk the U.S. notches up tariffs on up to $200 billion in Chinese exports to the U.S. That level of trade dispute becomes even harder to unwind. "The higher the tariffs get, the harder it is to get off," Tyner said.

There is also what Joe Glauber, USDA's former chief economist and trade negotiator, describes as the "moral hazard" of paying industries such as agriculture for bad policy decisions that hurt them economically.

"If you let a bull into a china shop, the reaction is to get the bull out of the china shop," said Glauber, now a senior research fellow at the International Food Policy Research Institute. "But if you follow the bull writing checks to everybody, people may just feel, 'OK, fine, you're compensating me.' And I think that's the real moral hazard question.

At least one senator has already pointed to losses in the seafood and energy sectors that have resulted from tariffs as possible candidates for additional government aid.

Tyner made a similar point about the farmer aid. "It (the $12 billion aid package) doesn't help everybody who is hurt by these trade issues," Tyner said. He pointed to Ford, saying steel tariffs could cost the company $600 million in profits this year. "Is there any aid package for Ford? Well, apparently not."

Tyner said the real value of the aid package to farmers was the need for Trump to defend his rural base. "Clearly, he did this for political reasons. China did it too. China targeted commodities that would hurt his base," Tyner said. "Countries always do that. That's the way retaliation works. It's based on political grounds, not economic grounds. So China targeted people they knew would hurt him politically, and he's made the decision he needs to help those people economically, so he will be helped politically."

Lindsay Greiner, a farmer from Keota, Iowa, and president-elect of the Iowa Soybean Association, thinks most farmers realize that soybean exports to China were an exception to the rule when it comes to trade.

"I think most farmers would agree our trade deals with China were not very good for the country as a whole," Greiner said. "I think most farmers think there needs to be improvement in some of these deals, but I think farmers, by the same token, are running out of patience. We'd like to see progress and get something hammered out so we can continue to do business with China. We've spent 30 years trying to build that market up, and now it's going away from us, so there is real concern out here in the country."

Greiner said farmers are talking quite a bit about soybean trade and the aid package, given the fall of prices since May. "As far as the $12 billion package to support farmers, I think most farmers would say they really aren't all that crazy about another program that gives us money," Greiner said. "We would rather have markets. That being said, whenever they roll it out, we're all going to sign up and take whatever they are going to offer, but we would much rather have our markets back that we lost."

But an aid check isn't going to be enough to help every producer carry on, either. "It might be somewhat of a life preserver, but there is going to be some stress out there in farm country this year," Greiner said. "There are going to be some people who are going to have a hard time getting financing to farm next year. We've already seen some of that stress come on this year. Even with a government program, that's not going to fix the problem that we're facing right now."

As soon as the aid package was announced, biofuel groups countered that the White House could have helped farm income by immediately approving E15.

Biofuel groups praised Trump's comments Friday, but not everybody thinks that goes far enough. Doug Sombke, president of the South Dakota Farmers Union, sees E15 year round as only recovering a share of the biofuel demand lost by EPA's small-refiner exemptions under former EPA chief Scott Pruitt. "And we're never going to get that back."

Sombke argued that if the president really wants to help farmers, he could go beyond E15 and move to allow 30% ethanol in every vehicle. That would drive demand for corn. The Trump Administration could require higher octane levels, which would drive more ethanol use.

"That would increase the markets and give consumers choice," Sombke said. "We just don't have access to those energy markets. That's our biggest challenge. When we rely on subsidies like aid packages, that's hurting us. That's not what this country is about and what we've envisioned," Sombke said. 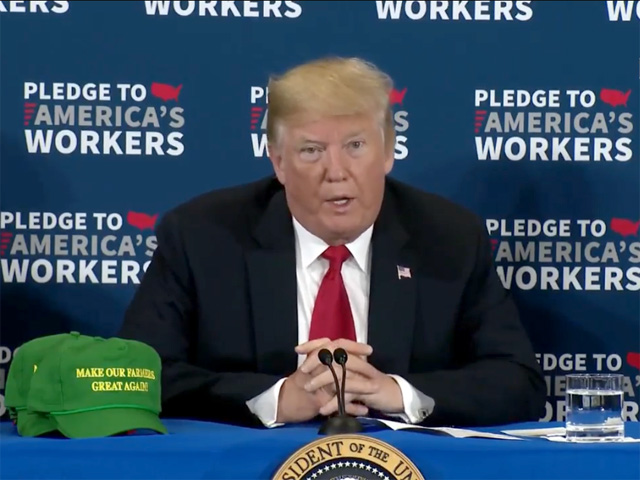