WICHITA, Kan. (DTN) -- Cities looking to address water-quality challenges in watersheds leading into their drinking water supply may want to see how Wichita, Kansas, works with upstream farmers to reduce pesticide and sediment in the Little Arkansas River watershed.

Litigation over water quality, especially the federal case in Des Moines, Iowa, in recent years, has drawn a lot of attention. Meanwhile, some other more cooperative water-quality efforts have received less attention.

Ecosystem service trading programs, as they are called, are becoming more popular. American Farmland Trust and the National Association of Conservation Districts released a white paper last month on environmental markets. The report highlighted other water-quality trading markets in the country and explained various recommendations.

While the report spotlighted some major trading projects elsewhere, the white paper didn't touch on some of the work in and around Wichita. That somewhat reflects how quietly the city and K-State have gone about their work with farmers in the watershed. https://goo.gl/…

In 2006, Wichita and the state of Kansas began looking for ways to reduce atrazine problems in the Arkansas River. The city was working to capture high-flow conditions in the river and store water in an underground aquifer for the city to draw on during drier times. Unfortunately, the city can't divert water to store underground unless the water meets certain purity standards. Atrazine was causing a problem there. According to EPA guidelines, atrazine is supposed to remain below 3 parts per billion in waterways, but at times it could spike as high as 30 parts per billion in the watershed, especially when runoff was high.

The atrazine program began as part of the Kansas Watershed Restoration Protection Strategy, known as WRAPS. The state has 36 such watershed projects that operate with funding from the Environmental Protection Agency's Section 319 program, which deals with non-point-source pollution.

Wichita's atrazine program is all about reducing application rates, changing the timing of applications and split applications in fall and early spring. Essentially, the goal is to reduce atrazine use before late spring and early summer when Wichita becomes more prone to heavier rain events.

"Each year we started seeing significant [atrazine] reductions in the watersheds we tried to go after," said Ron Graber, a KSU Extension specialist in Wichita. "So we're convinced it's having an impact. If we can just get it off the surface for runoff, that's the main thing."

Payments for atrazine reduction only average about $3 an acre, but about 20,000 acres are enrolled. The program also allows Extension agents and others to have more conversations with farmers about overall runoff issues. Graber said the programs have a high acceptance rate with growers. The atrazine problem hasn't completely gone away, but it has been reduced.

"Maybe a good way to think about it is we are buying an education," Graber said. "It's pretty obvious if your atrazine is leaving the field, then you aren't getting good weed control. We have not totally eliminated the spikes, but now we're at 8-to-12 parts per billion at times; it's not 30."

Frank Harper, a crop and livestock producer near Sedgewick, Kansas, has been involved in the atrazine task force since it began. The goal is to reduce the soluble atrazine so the city doesn't have to do as much treatment to filter it.

"I think we've had some impacts," Harper said. "Ten or 15 years ago, atrazine was a product that was used more than today. We still need the product, but we were willing as a community of producers to understand the impact we were having and what we could do to reduce that impact.

Harper said farmers have had some good interactions with the city of Wichita and producers have been willing to work in partnership. "It's always better to do these things without something coming down with the heavy hand of the government, that's for sure," Harper said.

Atrazine is water soluble and can move pretty quickly into the water, Harper noted. Sediment has also been a growing challenge over time, he added. It may not be a specific farm or situation that is causing a problem, but river quality becomes an accumulative problem if practices don't adapt, he said.

"The little things we do can sometimes have a pretty big impact, I think," Harper said.

The funding for the atrazine program initially wasn't significant. It started at $10,000 from the city and state, and grew from there. State funds were replaced with EPA 319 funds that matched $50,000 from the city. The available funds grew to $100,000 with equal matching from the city of Wichita and EPA funds.

In 2013, the EPA 319 funds were shifted to deal with a new sediment program, and the atrazine program became solely funded with $50,000 from Wichita. That was after Graber and others started looking at whether a trading program could reduce sediment, especially from storm-water runoff.

The White House budget for fiscal year 2019 has proposed eliminating the $169.7 million used by local communities for the EPA 319 program, but Congress will determine whether such grants continue to have value.

Built somewhat on the success of the atrazine program, Wichita started a sediment trading program in late 2016. Farmers enroll in a five-year best-management-practices program that can pay a maximum of $50 an acre, based on a formula for those practices. Just under 500 acres were enrolled in the trading program last year.

The program allows developers in the city to reduce costs for hydro-dynamic storm-water drainage systems that can run $25,000 each, and reduce sediment in storm-water runoff by roughly 0.2 tons per acre. But after doing some modeling, it became clear it would be cheaper to incentivize upstream farmers to adopt no-till systems and grow cover crops, or double crop, as ways to reduce erosion rates.

"If you look at the economics, it's much more economical to do that in a rural landscape," Graber said. "From a holistic standpoint, we're keeping more sediment out of the system."

Every ton of calculated sediment reduction in town must equate to at least two tons of reduction in the rural landscape. It does require farmers to be inspected every year. No-till practices and intensive crop rotations reduce sediment an average of 3.2 tons per acre in the same Little Arkansas River watershed.

"No-till was a popular option. A lot of farmers picked no-till," Graber said. "We do encourage intensive farming. We think even with no-till, they should grow something as soon as possible. In my view, about 80% of the acres will stay in no-till after five years."

Developers pay a monthly fee equal to $19 an acre per year, as opposed to building a drain system that also costs $500 annually for inspections. About 50% of the new developments in the city are now participating in the program, which translates into 44 developments encompassing about 283 acres. More developers, though, want to enroll, including signing up current developments to eliminate the annual inspection fee on their storm-water systems.

Graber said he's looked at some other programs cities are doing to reduce chemicals and sediment, but hasn't seen any other city and Extension service doing quite what Wichita is implementing.

"We couldn't find anyone who is doing anything quite like this," Graber said. 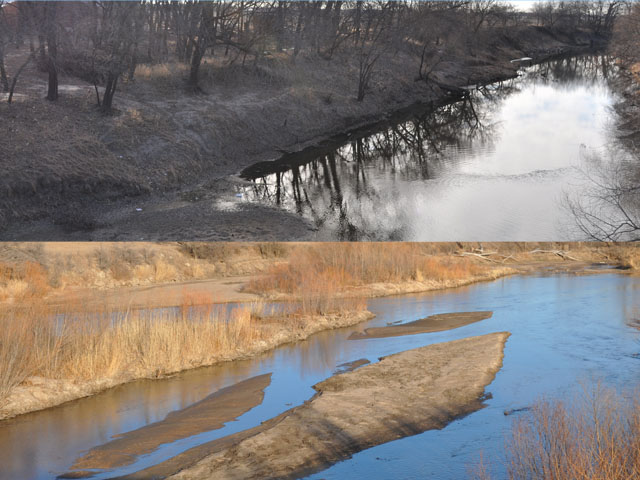