DES MOINES (DTN) -- Five former U.S. Agriculture secretaries shared the stage Monday as they kicked off the Iowa Hunger Summit with a debate on nutrition and food aid, though each secretary also opposed the idea of splitting nutrition and agriculture programs in the farm bill.

The secretaries said they only really expect tweaks to the next farm bill and don't anticipate any major policy changes in the legislation. Ed Schafer, who served as Ag secretary from 2008-09, said if the farm bill is going to get approved and signed by President Donald Trump, then agriculture will have to send a message that the farm bill was combed through and efficiencies were found in a new farm bill.

"If we're going to see a farm bill generated and passed, and signed, I think today with the administration's focus on change and reduction of cost -- dealing with the financial pressures we are dealing with -- there are efficiencies that we can put in to the farm bill that can be less costly, that can provide faster, better service and get our programs to farmers and ranchers and landowners better -- that are less costly," Schafer said.

A major focus of the secretaries' conversation was about how USDA food-aid programs such as the Supplemental Nutrition Assistance Program (SNAP) could be used to address obesity or diabetes among people who qualify for the program.

Ann Veneman, Ag secretary from 2001-05, pointed to problems facing the U.S. with diseases such as obesity and diabetes. If both Medicaid and the Supplemental Nutrition Assistance Program are going to be funded by the federal government, then more emphasis should be placed on healthier foods, she said.

"We should be talking a lot more about nutrition and not just hunger because nutrition is the key word," Veneman said.

Veneman later came back around to the importance of nutrition as even the U.S. military is challenged in recruitment because too many potential military candidates are considered too obese to serve. She said she recognized the issue of restricting food items is politically charged and likely would not gain traction in the farm-bill debate. "But I think it's time to start with some pilot programs," Veneman said. "Let's look at some parameters. Let's have Congress say such pilots could take place."

Harvard University has proposed a farm-bill program for doctors to prescribe healthier foods and vegetables to people with certain medical issues. "So there is a big push now to potentially create a pilot for actual medical nutrition for people who have these conditions," Veneman said.

Tom Vilsack, Ag secretary from 2009-17, moderated the panel. He noted nutrition advocates would argue that restricting SNAP would stigmatize those who use the program. That leads to a question of is it realistic to restrict SNAP purchase and, if so, then where is the line drawn?

Dan Glickman, Ag secretary from 1995-2001, noted it's a complicated problem with a simple, but likely wrong, solution. Americans generally are eating a lot of calorie-dense foods that are marketed to them in a variety of ways on television. Yet, he noted Medicaid and Medicare are the fastest-growing aspects of the federal budget.

"This is a fundamental issue we need to talk about," Glickman said.

One of the challenges in tying healthy foods programs into USDA programs is that the costs of those programs don't factor in the long-term potential savings in another area of the federal budget. There's no offset factored for future savings from reduced diabetes treatments in the Medicaid program, for instance. Glickman and Veneman are involved in a project in Washington, D.C., looking at this specific issue.

"We just don't coordinate the feeding programs with the health-care programs," Veneman said. "If we don't look at this holistic picture and how it comes together, I think that's a big problem."

Mike Johanns, Ag secretary from 2005-07, noted that during his time in the Senate, he was in a committee appropriations debate in which a senator was trying to ensure a food product from his state would not be blocked from use in food programs. This would be a broader challenge with Congress if limits were created on individual food items, he said. It would further make food items political.

"All of a sudden we're in the appropriations committee deciding what food items should be restricted. In this senator's home state, they grew this item in abundance, and he wanted to make sure there is a market for this," Johanns said. "That would be like saying you can't overdue it with pork. I would think (Sen.) Chuck Grassley would have a few issues with that. And these are the items you run into."

Johanns said that the U.S. is coming up short in educating people about good food choices, and that's always a challenge in a tight budget environment as well.

Johanns also said work at a food bank in Lincoln, Nebraska, shows that, often, there are a lot of other issues facing people who come to the food bank for help. That could be mental health, substance abuse or homelessness, he noted. He said more work is needed to take a more holistic approach to dealing with these food challenges.

Veneman said there is a fundamental challenge facing American homes right now that is also driving unhealthy eating habits. "People no longer know how to prepare foods. People don't know how to cook anymore," Veneman said, citing a celebrity chef reality show spotlighting a family of overweight people who only had processed foods in their home.

Another challenge in the food debate is when to limit food aid for people who are considered able-bodied but also have no children. Congress frequently sees a budget opportunity to limit SNAP for these people, but the secretaries noted people in these positions often have a hard time finding a job that pays enough income to support themselves.

"Most people don't stay on for every long," Glickman said. "There's this belief system that once you are on, you are on and you are treading water, but that's just not the case. People don't want to be on these programs forever. They want jobs, they want opportunities for their children."

Johanns later pointed out some reasons for revisiting the push to scale back the number of able-bodied people without dependents from long-term use of the SNAP program. First, the economy has improved and there are companies right now that are desperate for workers in parts of the country. Another reason is "That's the mood" of the American public, Johanns said. Layered on top of that, spending for mandatory programs such as Medicare and Medicaid will continue causing other areas of the government to shrink, he said.

"At the end of the day, I think those budget pressures are going to continue and continue," Johanns said.

The five secretaries each said in their own way that splitting the agricultural and nutrition programs would make it hard to pass either bill. Glickman said only 55 congressmen have overwhelmingly agricultural congressional districts.

"You wouldn't get either side (rural or urban) to pass either part of the farm bill, so you just have to put them together," Glickman said.

The panel discussion was disrupted early by a small number of demonstrators who chanted an anti-biotechnology slogan and held up a banner denouncing corporate greed.

"At least Dan Glickman didn't get hit with a pie like he has in the past," Vilsack commented following the demonstration. 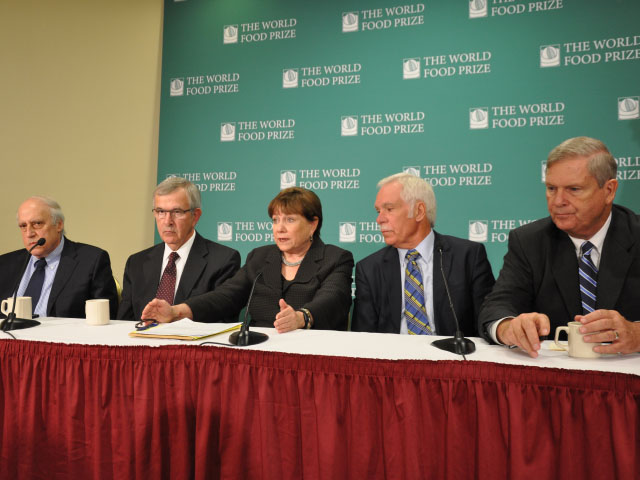