QUERETARO, Mexico (DTN) -- One of Mexico's leading feed mill and bulk commodity processing companies, Grupo Gramosa, has built its feed and logistics industry on the reliability of shuttle trains from the U.S. However, the 31-year-old company is increasingly working to diversify its grain supplies through strategic port expansions.

As talk began early this year about the U.S. possibly pulling out of the North American Free Trade Agreement, rhetoric increased that Mexico could start buying more corn or soybeans from South America.

In reality, that shift is already starting to happen. Mature Mexican grain companies with access to capital, such as Grupo Gramosa, want the same ability as larger American grain companies to play grain and oilseed production in both the U.S. and South America to their advantage. Grupo Gramosa now is investing heavily in new port facilities to make that happen.

Therein lies the rub for U.S. grain and oilseed exporters that have largely served Grupo Gramosa's import demands for more than two decades.

Grupo Gramosa is a leading Mexican trader of bulk feed grains with increased commercial feed-mill businesses to serve the growing domestic pork, dairy, beef and poultry industries. The company's grain shuttle-train station and nearby feed mill in Queretaro, about 130 miles northwest of Mexico City, are as state-of-the-art as any operation in North America.

DTN/The Progressive Farmer visited Grupo Gramosa's train shuttle terminal -- which relies heavily on U.S. imported products -- as part of a tour of the grain trade in the U.S. and Mexico, hosted by the U.S. Grains Council. The tour's focus is to highlight the integration of the North American feed grain market as the U.S., Canada and Mexico prepare for the first round of renegotiation talks next week on NAFTA.

Mexico currently imports about 11 mmt a year of corn and sorghum, about 98% of which comes from the U.S., adding up to about $2.6 billion last year. Mexico also imported about $1.5 billion worth of soybeans.

Amepa, a Mexican trade association for feed mills, doesn't want to see changes to NAFTA that would rock the North American grain trade, even if companies such as Grupo Gramosa are hedging their international supplies. Like most smaller Mexican businesses DTN visited this week, Amepa leaders are concerned about tariffs or taxes being placed on imported grain or oilseed products.

"We are going to be very cautious about how are going to present our strategies on NAFTA," Jose Manuel Rodriguez Mancilla, director of operations for Amepa, said through an interpreter. "We think they should deal with other topics or other things. We want to have the same import access that we have now."

Grupo Gramosa has steadily expanded its logistics and operations in the 23 years since NAFTA took effect. Just since 2006, the company's grain terminal in Queretaro tripled its bin storage capacity for raw grains to just under 4 mb, as well as added over 100,000 square feet of warehouse space for products such as dried distilled grain. The terminal has 7.5 miles of rail track, as well, for shuttle trains that largely start at grain elevators in Iowa and Kansas.

Dried distilled grains were barely on the radar of the Mexican feed industry a decade ago when Grupo Gramosa started dabbling in the product by railing in about 200 metric tons. Since then, the Mexican dairy and beef industries have come to rely heavily on DDGs for their feed mixes. Shuttle trains originating at Midwest ethanol plants rail in about 10,000 mt of DDGs monthly to Grupo Gramosa.

Shuttle trains will start with Union Pacific, for instance, in the Midwest. U.P. has strategic access to multiple key border cities in Texas where U.P. then will hand off grain, oilseed or DDGs to one of the Mexican rail lines, such as Kansas City Southern de Mexico. A shuttle train starting in Iowa may take eight to 10 days to reach the grain terminal in Queretaro.

Even though rail works well for Grupo Gramosa at Queretaro, the company started diversifying in 2013 when it opened a grain unloading terminal along the Pacific Ocean in Chiapas, Mexico, in the southern edge of Mexico.

Last year, Grupo Gramosa got access to the vessel capacity in the Gulf of Mexico at Tuxpan, Mexico, which has about 1.2 mb of storage capacity. The problem with that facility, however, is everything has to be hauled out of Tuxpan by train because of the lack of rail access at that port.

Grupo Gramosa's latest investment will allow it to better hedge between the U.S. and South American corn and soybean production. About 200 miles south of Tuxpan at Veracruz, Mexico, Grupo Gramosa just started construction on a new terminal on the Atlantic that will open late next year or in 2019; the terminal will have the ability to store 4.725 mb of corn, or 120,000 mt. That will essentially double the company's overall grain and oilseed storage, as well as offer rail access to Mexico City. Veracruz will provide strategic location to import grain and oilseed from either the U.S. or South America.

The Veracruz facility will put Grupo Gramosa more on par with larger international grain players such as ADM and Cargill that already have terminals in Veracruz. The port currently brings in about 1.5 mmt of grain and oilseed a year.

"That volume is what we want to take, so we will be competing directly with ADM and Cargill at Veracruz," said Arturo Garcia Covarrubias, a commercial manager at Grupo Gramosa.

While U.S. grain and oilseed exporters have assured themselves that the U.S. still has a transportation cost advantage over Brazil or Argentina, Grupo Gramosa executives say the cost difference is largely seasonal.

"During the Brazilian or Argentinian harvest season, prices can be real competitive," said Edmundo Miranda Cortes, director of commercial operations for the company. "Beyond that, if you add that spoil is going down and the vessel rates are going down, it can get more competitive."

The business decision to begin looking at buying grain and oilseed from South America wasn't driven by NAFTA renegotiations -- the investment plans began two years ago -- but the port development just happens to coincide with the timing for the renegotiation of the trade deal.

"It's not that we want to stop doing business with the U.S., but with the NAFTA talks beginning this month, it forces us to look at other markets," Miranda Cortes said. "And the good news is those other markets just so happen to be aligning with our logistics and costs and quality."

The quality element is another situation Grupo Gramosa executives noted since they started getting access to U.S. grain vessels coming out of the Gulf of Mexico. The quality isn't the same they get from U.S. rail products or from South American vessels.

"When you compare U.S. grain by vessel to Argentina or Brazil, it's a lot of less foreign material" in the South America vessels, Garcia Covarrubias said. "So, currently, some customers realize that and some are willing to pay a little bit more for that quality."

U.S. shippers are allowed a 3% tolerance for foreign material, and too often they are willing to bump right up against that limit. Further, corn will often be cracked as well. Meanwhile, grain and oilseed from the same companies shipping out of Brazil and Argentina have improved over time.

"They (U.S. shippers) use the grain regulations to their benefit. The difference with the rail is the origin is the Corn Belt, and they are cleaner that grain coming off the vessels," Garcia Covarrubias said. "The grain coming out of the Gulf, they blend a lot." 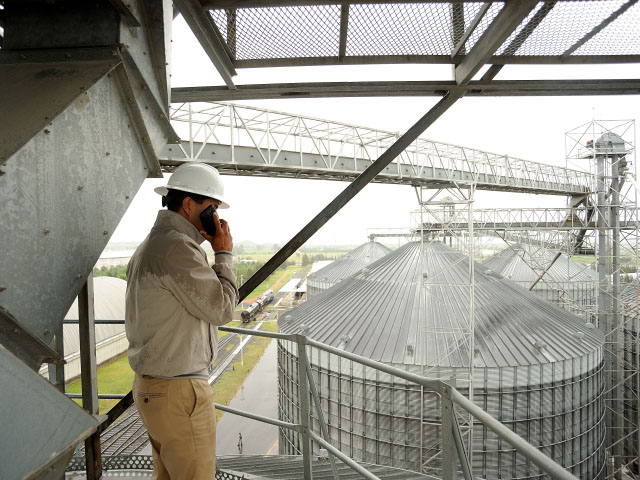