OMAHA (DTN) -- Farmers considering a switch or transition to organic crops have a lot to read right now if they want to keep pace with changes happening in the industry.

Several changes in the organic industry have happened just over the past week. USDA on Wednesday finalized a rule on organic livestock and poultry management practices. On Tuesday, USDA also opened up a comment period on a possible organic checkoff program. Last week, the department approved a new "transitional certification" program. A cost-share program to help farmers transition is also moving agencies at USDA to make it more accessible to farmers.

Hopefully, the program changes are helpful and the premiums for organic corn or soybeans are still going be there in three years for farmers such as Wendel Lutz, who farms near Dewey, Illinois, and is just starting to make the transition on 80 acres. A landlord had asked some tenants if they would be interested in converting to organic production. Lutz had known others who grew organic crops and wanted to give it a shot.

"I really like the people and what they are trying to accomplish, and now I get a chance to try it out myself," Lutz told DTN. "It will be quite an experience, but I'm looking forward to it, and it's only 80 acres. If it goes over good, and there are good markets like they claim there is, we'll see about expanding more ground in years to come."

Marnie Jensen, an attorney with Husch Blackwell in Omaha, works with farmers and ingredient buyers on organic certification, USDA rules and the supply chain. As commodity producers deal with the high supply and lower prices in the current markets, organic transition should be viewed as a diversity strategy.

"I think so many landowners and farmers think organic -- I don't care about that little green sticker -- it's not about that. It's a crop diversification issue," Jensen said in an interview with DTN.

Jensen noted the organic supply chain also is one of the few steadily growing markets for farmers. According to USDA, the organic industry in 2014 accounted for $39.1 billion in retail sales. Sales at the farm gate were about $5.5 billion in 2014, up 54% from 2011.

In other efforts to promote organics, USDA announced on Tuesday that the department is now seeking public comment on a national checkoff program for the organic industry. The proposal, spearheaded by the industry group the Organic Trade Association, could generate as much as $30 million for organic research and promotion if USDA moves ahead to adopt the proposal.

Not everyone in the industry is going along with the checkoff plan. More than 25 organic groups and businesses have joined to form the "No Organic Checkoff Coalition." The groups argue that a checkoff would only help large processors and not small, local farmers.

Most organic groups, however, are pleased with the USDA rule finalized Wednesday for Organic Livestock and Poultry Practices. The rule requires a certain amount of space -- both indoors and outside -- for animals or poultry products to meet the National Organic Program guidelines. The National Pork Producers Council, however, criticized the rule as "another midnight regulation dumped on farmers" by outgoing Agriculture Secretary Tom Vilsack. The pork council stated it would work with Congress and the Trump administration to overturn the rule.

The move for an organic checkoff comes after USDA agreed last week to partner with the Organic Trade Association last week for a new National Certified Transitional Program that will certify farmers as being in the process of converting from conventional crop production to organic. The transitional certification is expected to boost premiums for those producers while also spurring more farmers to consider conversion to organic production.

The three-year transition period to organic certification has been considered one of the stumbling blocks for farmers considering the move. Yet, as more food companies and processors are looking for non-biotech ingredients of feed, this transitional certification is expected to help.

Some grain buyers worry about that reliance on imports.

"We see the biggest threat to organics as the loss of credibility because of major problems coming out of countries that don't have a uniform commercial code and don't have any conscience about committing fraud," said Lynn Clarkson, president of Clarkson Grain Co., in Cerro Gordo, Illinois,

Clarkson said the transitional certification should also help grain buyers and food companies that want source verification for their feedstuffs and ingredients.

"A transitional label allows people to get in and defer some of the frays about reduced revenue over the three-year period," Clarkson said. "Asking farmers to wait for three years in an industry that's used to living on a 2% to 3% rate of return -- that's a long time."

The key for any farmer is to focus on the transition, premiums and change of business as an economic decision. "Put yourself through the math of converting and scaling it up," Jensen said. "Almost every farmer I know is an expert at math. That's what they do. Can I make more money as a farmer growing this or not? At the end of the day, if the answer 'maybe,' then you ought to give it a try."

The premiums right now for a transitional or non-GMO corn can range widely. Clarkson said he has seen the premium decline to roughly 10 cents a bushel. The organic markets company Mercaris cited a 56-cent bump in the difference between non-GMO corn in the central U.S. and the December CME Futures price.

A bi-weekly USDA report on Wednesday showed the average price for organic corn was $8.15 a bushel across the U.S. in December, with a range from $7.50 to $8.50 a bushel.

The average organic feed price for wheat was $8 a bushel.

In other efforts to promote organics, the Farm Service Agency also just took over the organic cost-share certification program from Agricultural Marketing Service. Starting in March, farmers will be able to go to FSA offices to apply for USDA funds to help offset the costs of both the transitional and organic certification.

"We did that not because they were doing a bad job, but we've got this network of over 2,200 offices that just make it easier to roll out something like that across the whole country," outgoing FSA Director Val Dolcini told DTN. "I think with our footprint we're going to be able to better help states utilize that program."

Lutz pointed out he has a fellow farmer helping him with the transition, and he will be attending meetings with others to learn more about the actual certification process, as well as funding through other cost-share programs such as the Environmental Quality Incentives Program. Lutz is also checking with companies such as Clarkson and other area grain buyers about the demand for transitional crops.

"This will be my first year coming up transitioning," Lutz said. "We've got a plan set up. There is a local fellow here who has a small farm here, and he is in the second year of transition. He's going to be my adviser on how we do things."

Jensen cautions that farmers also need to understand that organic certification is not a one-time process. There is a lot more recordkeeping involved than many farmers are prepared to manage.

"You are going to have some stranger showing up at your farm once a year to make sure you are following the rules. If those things just aren't worth it for you to make a lot more money, then don't do it," she said.

Jensen said she often talks to farmer-clients about transitioning just a portion of their total operation toward organic as a diversification option. "There are a lot of ways to transition your land, but it does take three years, and that is a lot of patience," Jensen said. "You don't do this overnight with 10,000 acres, but why don't you take 1,000 acres and start to transition that to organic production?"

Renters also face different challenges than owner-operators. Not every farmer is as fortunate as Lutz to have a landlord specifically interested in organic conversion. A renter wanting to convert also needs a landowner willing to provide a long-term agreement to lease the ground.

"Here's the biggest risk: I have got a three-year agreement, and right when that land is most profitable, I can lose it. I would never tell anyone to take that risk," Jensen said. "If your owner won't give you anything longer than a three-year lease, you are going to have a problem there." 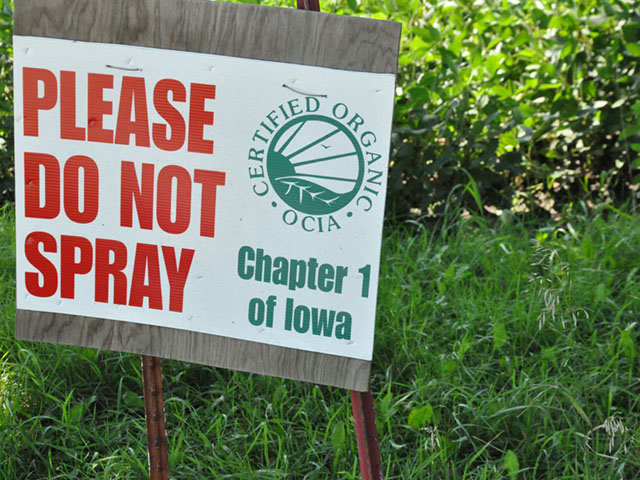