It's been five years since Kip Cullers pulled a soybean yield of 160.6 bushels per acre from the rugged, red clay soils of southwest Missouri. That was more than the national average corn yield that year, nearly four times the national soybean yield average. To date, no one -- not even Cullers -- has surpassed the mark in an official yield contest.

"We can make 200 bushel," Cullers said. "However, achieving those kinds of yields means checking and watching plants twice a day, seven days a week to make corrections in foliar feeding and to precisely apply water. You dang near have to name every plant," he said.

Cullers first reached the winner's circle in 2006, instantly becoming something of a cult hero. Followers flocked to his Stark City, Missouri, fields. Time magazine crowned him the soybean king and linked him to a new green revolution.

These days, Cullers is conducting his soybean crusade in a less public way. He networks with about 50 U.S. growers willing to test and share findings. He's teamed up with Conklin Co. to develop Kip Cullers' Nutrient Compass Foliar Fertilizer, a 3-4-8 blend of nutrients farmers call "Kip's Super Juice." He makes about 20 trips a year to Brazil to soak up production tips and test techniques. "It's not that Brazil doesn't have regulations, but it's an easier place to work than the U.S.," he said.

Cullers admitted he's worn thin trying to teach U.S. growers how to be competitive. The 60-bushel-per-acre yield goal the United Soybean Board wants to achieve should have been met by now, he said. "The problem is U.S. growers don't want any pain with the progress. For example, if you spray a fungicide, it makes stems green. It's worth dealing with."

Farm less land and do a better job is the message. Still, Cullers said yield contests are about taking 20 to 40 acres to try new things to see what might work across thousands of acres. "The biggest mistake farmers make is thinking high yields are about inputs. It's about timing of those inputs," he said.

As a kid, he hated school -- don't even bring up milking cows. He likes growing things and reels off crop years, yields and inputs costs like box scores. "Last year, our double-crop soybeans averaged slightly over 100 bushel behind wheat with $195 bpa of inputs. Let's talk profitability," he said. In 2014, his whole farm soybean average was 103 bpa over 1,000 acres at an average input cost of $123 per acre.

A three-year University of Arkansas research project is still in the process of analyzing Cullers' practices, and lead researcher Larry Purcell calls the crop-growth characteristics "extraordinary" -- more biomass, more photosynthesis, more nitrogen accumulation. The amount of nitrogen derived from nitrogen fixation was less than 10%, which indicates that large amounts of mineral nitrogen was available in the soil, Purcell explained.

This past season, the rains came in feet, not inches, and Cullers' high-yield plot was planted June 20. Maximum yields come when beans are planted in April and blooming by May 20, he said.

This year, he widened the Monosem planter to 38 inches and split the 30-inch centers. "Basically planting like a drill, but with more precision," he said. The 180,000-plant-per-acre seeding rate was more than he'd like. He plants indeterminate varieties that pack on pods at each node. Rank growth is his biggest production challenge.

"They'll make 120 bushel with some pockets of the field above that," he said. "Not a record ... but not bad given the year."

The United Soybean Board has set the ambitious goal of reaching a 60-bushel-per-acre national average by 2025. Many U.S. soybean growers have already surpassed that milestone and set their sights on reaching 100-bushel yields. In this seven-part series, DTN/The Progressive Farmer looks at some of these top producers and their practices. This is the fourth story in the series. 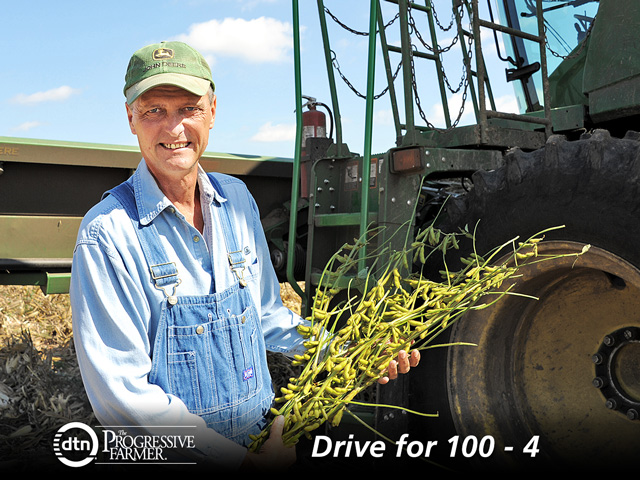