OMAHA (DTN) -- It was a wet, ugly spring in parts of the Midwest this year. Nearly 40% of Missouri's expected soybean acres were still unplanted at the end of June because of the wettest stretch of May and June rains they've seen in 20 years that wrecked planting season across the northern half of the state.

Illinois farmers saw the wettest June on record that began drowning out their corn as rainfall averaged 9.53 inches statewide, more than 5 inches above the norm. June appears to be getting wetter in Illinois. While 2015 broke a record set in 1902, four of the 10 wettest June totals across the state have come in the last six years.

In Indiana, the rains and flooding in June may have caused as much as $450 million in early crop damage, according to a Purdue University economist.

The growing season in the Midwest is about nine days longer than it was in the 1950s, but that longer growing season is somewhat offset by more frequent rains shrinking the number of workable field days in the spring. Over the last 15 years, spring fieldwork days in Iowa have declined, mainly because of more frequent, more intense showers. These more chronic precipitation events during planting season are considered one of the bigger problems facing farmers in the region.

"One of the major vulnerabilities I believe we have across the Midwest region is how we manage water," said Jerry Hatfield, a USDA Agricultural Research Service plant physiologist, in Ames, Iowa. "We have got this variable precipitation. So the water management issues relative to untimely rainfalls in the spring get exacerbated in terms of impact. Then you've got 4 million acres of prevented planting."

Hatfield is the lead researcher for USDA's Midwest Climate Hub, one of seven such operations set up last year across the country. USDA officials created the hubs last year to analyze regional and local risks that face farmers, ranchers and foresters in coping with more extreme weather conditions. The hubs are part of the building block for USDA's national "climate-smart" agricultural adaption strategy. The hubs are tasked with pointing out the risks, but they also analyze or recommend strategies available to producers to cope with changing climate conditions.

"We have to look at it from a viewpoint of a producer that these strategies need to stabilize yield, increase profitability, or efficiency and have all of these other side benefits," Hatfield said.

Climate science tends to project out decades to highlight accumulative effects of higher greenhouse-gas emissions on global warming. One problem with such modeling is that individual farmers and livestock producers aren't fixated on what the cropping or forage conditions are going to look like in 2065.

"If you are a farmer, what happens 50 years from now is not as important as what happens in the next 50 days," said Steve McNulty, a USDA Forest Service landscape ecologist who heads the Southeast Climate Hub. "We really focus a lot of our attention on the climate variability and very little on the change aspect. Because if you are doing sustainable measures that work now, chances are they will still work in the next 50 years. So that's our focus."

Justin Derner, who heads the climate hub for Northern Plains states, sees more farmers changing their cropping systems through double cropping, cover crops and adapting rangeland practices to take advantage of the northern shift in hardiness zones. That is evident in North and South Dakota where a predominantly wheat-cropping system is increasingly shifting to more corn and soybean production. Instead of just viewing climate change as a challenge, a shift in cropping practices can lead to opportunities.

"There's a recognition by the vast majority of folks that over the last 15, 20, 30 years, they have seen some fundamental shifts and they are trying to capitalize on what is the right thing to do today in terms of the right crop, the right variety and right planting strategy so they can be on the forefront of the changes to come," Derner said.

For instance, a longer growing season in Montana is causing farmers to move away from summer fallow and following up winter wheat with another crop in the rotation.

Derner noted scientists frequently cite the risks of more invasive pests and diseases. It's an underappreciated challenge until a major outbreak occurs. In the Northern Plains, the longer growing season helps winter annuals such as cheat grass and deep-rooted forbs like Dalmatian toadflax and leafy spurge. Invasive weeds generally respond well to increased carbon dioxide and some of those weeds like the toad flaxes are prolific in producing seeds.

"How fast will pests and disease move and which ones?" Derner asked. "What are these vectors that we might not be well aware of? It's one of these things that unfortunately doesn't raise its ugly head until an outbreak occurs. Then it's pretty much scramble mode. That's a weak point in our knowledge, but it identifies a clear gap we can focus some resources toward."

Derner, Hatfield and McNulty each identified a crop vulnerability directly tied to warmer weather. Normal night temperatures aren't decreasing as much in the summer growing season as in the past. This translates into higher overall temperatures in the grain-filling period. The nights aren't cooling down quite as much in the summer. Much like California fruit trees need chilly winters as part of their lifecycles, grain crops such as corn need their cooling down periods at night. Higher temperatures during the grain-filling period put more stress on the plants.

"We end up with more stress on the plant, because respiration is a direct function of temperature," Hatfield said. "So we respire a lot more at night and if we are respiring we're not putting that respiration into grain. So I think this is where a lot of the yield reduction comes from that everybody talks about with rising temperatures. It's the higher nighttime temperatures that are causing it more than anything else."

Effectively, the plant burns more of its sugars at night rather than converting those sugars to carbohydrates to fill the grain. The plant is using sugars to maintain itself rather than grow. There is less energy to grow kernels.

"The thing that probably scares farmers the most is this nighttime temperature increase," Derner said. "The nights just don't cool off very much like they used to. You get some of these crops, barley being a prime example, it just gets too hot and they lose quality in the grain."

As researchers have learned, language matters in dealing with climate change. Leaders at the climate hubs are often couching the topic by describing more volatile weather patterns or extreme weather events.

"You can't talk to farmers and ranchers about climate change," McNulty said. "You won't get a very warm reception, but if you talk to the same farmers about resilience to drought and excessive rain, then they are all ears. It's the same thing; it's just how you phrase it."

The same goes for the idea of sequestering carbon in the soil to mitigate climate change. That conversation might go better by talking about long-term sustainability of the soil as well as improving both nutrient- and water-holding capacity. Climate scientists may talk about mitigating greenhouse gases, but in reality, soil scientists focus on mitigating soil erosion and nutrient runoff. Farmers can relate more to those topics.

"I think we need a much more holistic view that we present to the producers, saying to them that this is an adaptation strategy that you can use to offset weather or climate impacts for the season, but the additional impact that you get from this is to reduce nitrate leaching, reduce runoff of phosphorus or sediment, all of these things go hand-in-hand," Hatfield said.

More information on climate hubs can be found at http://climatehubs.oce.usda.gov 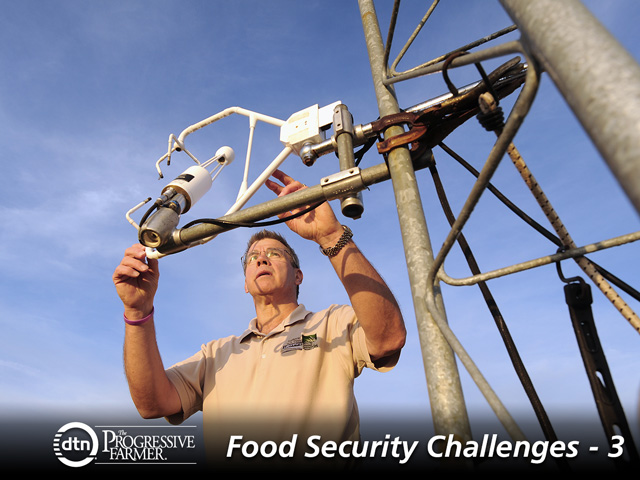