RED OAK, Iowa (DTN) -- For more than five decades, Jack Baird's farm outside of Red Oak has provided one of the most amazing rural displays of Christmas lights and decorations in southwest Iowa, if not across the country.

It is both sad and sweet that Jack passed away on Christmas, just a few weeks after his 91st birthday. He had been hospitalized following complications from a fall.

"He passed away on his favorite day of Christmas," said Sandra Severn, his partner for more than 20 years. "This house is kind of lonely without him."

The Baird family posted a notice on their Facebook page dedicated to Baird's Christmas Lights that Jack Delaine Baird had passed away. The 10 acres of lights at his farm would continue to shine through New Year's night "as a loving tribute to the man who always held the spirit of Christmas in his heart."

KMA Radio out of Shenandoah, Iowa, first reported Baird's passing, noting that he actively worked on his family farm up until age 89. The 145-year-old farm is run by his sons, Chris and Kirk.

In 2020, Baird told Iowa Agribusiness Radio Network about the beginnings of his light display that started with his father-in-law.

"It got started about 50 years ago," he said at the time. "My father-in-law loved to go to junk sales and stuff. He went to one and bought a bunch of used Christmas lights. He brought them down here, and we put them on the fence. I think Chris (Baird) was about 8 or 9 years old at the time. The next year he wanted some more. We bought some more new lights and kept adding a little bit to them. When he got in high school, it just sort of started taking off."

Each year, the Bairds would add some new pieces to the display. It included multiple nativity scenes, Santa in a helicopter, Santa riding a motorcycle, a Ferris wheel, a tractor, a Massey-Harris combine, a 14-foot horse-and-carriage with moving legs and wheels, a 20-foot-tall soldier, a 70-foot tree, a 100-foot-high cross, various angels, stars and snowmen, and every other type of Christmas character.

Jack Baird once told KMA in 2017 that the light display at times could stress the farm's electrical load capacity. Newer, LED lights helped reduce the stress on the power draw. "That's the nicest part, because we're getting to where we push our load and all we can carry, and we have to be careful what we do add because it draws an awful lot," Baird told the radio station.

Chris Baird told farmnews.com before Christmas that the display takes up about 10 acres. Friends and neighbors help the family to erect the display, which they began to build Oct. 1.

"My dad is still actively involved with roles like preparing strings of lights for hanging, offering suggestions on display components and always enjoying daily updates on the set up," Chris Baird said. "A nightly highlight for Dad continues to be looking at the cards, Facebook comments and occasional drawings left by a child in the box by the driveway or received in the mail."

Talking about the display in 2019, Jack Baird said, "I'm glad that people like to see them. We do them to make people happy. It seems like we have a lot of unhappiness in this world anymore. We think these lights are something people can enjoy. They don't have to donate if they don't want to. They can just drive by and enjoy them."

The Baird's Facebook page had hundreds of comments Wednesday from people offering their sympathy, prayers and thanks for the decades of joy the Baird farm brought people who would come from miles around to see the family's display every year. People wrote about their memories of going to see the lights and stopping in to share cocoa with Jack and his family.

"What an honor it was for him to pass on a holiday so special to him and one he helped make special for thousands of others. Prayers for the family," wrote one of the many memorial commenters. 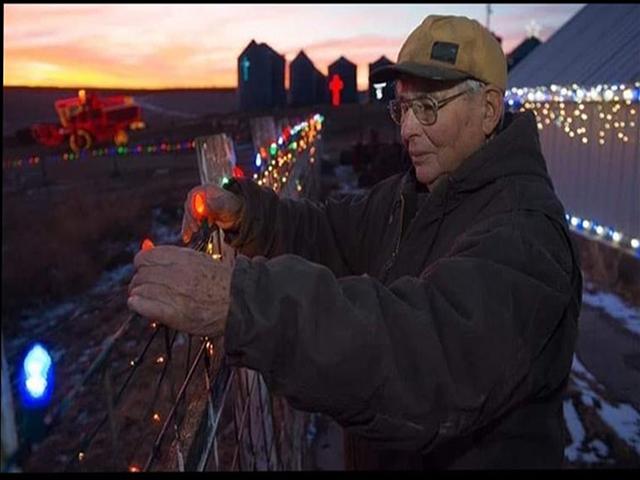