Kunkle Farms is the classic Corn Belt operation -- 250-bushel corn, 75-bushel soybeans. No livestock. The Kunkles are first-generation farmers working 2,100 acres, most leased outside Monmouth, Illinois, making a steep climb into production agriculture in a full-time partnership since 2016. Key for business and home life is communication.

"We used to joke that she needed to bring a beverage to our (business) get-togethers in the evening," Jared says. "My patience wasn't always great. But we learned mutual respect. We know what is in each other's wheelhouse and we try to stay in our lanes. Mine is not bookkeeping. I do a lot in my head, and I throw a lot at her."

Adds Rachel, "It was a big shift for us when we started to (listen) to each other. I know my first reaction is going to be like, 'Whoa, that sounds hard, and do we have the time and energy to do that?' And, his first reaction is always going to be, 'Let's make the pie bigger.' I learned to understand he's an external and quick processor. He has all the ideas. I'm going to hear all the ideas. They may not all play out, but I need to listen and not instantly go to no."

"I've had to learn to stop talking, to give her time," Jared says. "I fully respect her strengths, and it makes us a better team."

Their talks shape a strategy. "Do we want to grow?" Jared says. "I always am up for growing if it makes sense, but I want to make sure it fits with our goals and that we are not jeopardizing current relationships. I consider whether it fits with the farm-management and insurance sides of our other businesses. We want to grow those, too."

The Kunkles run Land Management Partners, a land-management business with friends and co-owners, Adam and Julie Martin, and an insurance company, LMP Agency, both in Monmouth.

"We definitely talk about growth," Rachel says, "and make sure both of us are in favor of it and make that decision together."

Buying a new piece of land follows the pattern.

"Jared told me he saw a 10-acre piece for sale on Facebook, of all places, that was located centrally for our farms with a house on it. My first question is always, 'How much?' and then, 'Why?' I'm quite predictable," Rachel says. "I was concerned with the shape of this property. It was trashed."

Jared says, "I pitched my reasons: the potential for putting up a grain facility close to our farms. I addressed her concerns about the shape of the property. We have the equipment to clean it up."

The property, with a 12,000-bushel bin and immediate access to an all-weather county road, is centrally located to their operations.

"I've come to realize Jared has a vision that I don't always see right away," Rachel says. "I'm not on the farm with him daily, and I don't fully know what he needs. But it is crucial for us to listen to each other. He's proven time and again he will make it work. It may not be the Plan A he originally thought about, but he also has Plan B, C and D in his pocket. Once I'm on board, Jared does the grunt work of figuring out how we can make it work. He keeps me informed, and I continue to be part of the process."

The couple closed on the piece of land this summer.

Neither Rachel nor Jared come from farming. Rachel's dad was a banker. Her farming grandfathers retired early in her life. Jared has always wanted to farm since farming the carpet in his boyhood home of Peoria. His parents did not farm. He remembers his grandparents as retired farmers still living on their farms.

Jared began working on farms around the Peoria area while attending Dunlap High School, Dunlap, Illinois. It was common to find him at his grandparents' and his great-aunt's farm, working and peppering the tenant farmer there with questions. As an 18-year-old, Jared got his commercial driver's license to drive semis. It was a good move. For two summers in college, he drove for Westlake Harvesting, out of Crookston, Minnesota. "Al Westlake taught me that a good boss jumps into the trenches and not to hire people to do the work you don't want to do. Lead by example."

He and Rachel met at Monmouth College in their junior year and were married in June 2007, three weeks after graduation. Jared played on the college tennis team and earned a sports management degree. Rachel graduated with a double major in business administration and history, with a minor in accounting.

Rachel was working at Caterpillar, in Peoria, Illinois, and Jared at Cross Creek Farms, in Brimfield, Illinois, where he drove trucks and learned agronomy under the tutelage of farm manager Rod Stahl.

"I had expectations," Rachel says of their early married days. "But if you had asked then whether we would be farming, I would have said no. He played tennis in college, so I thought I was marrying a city boy.

"I saw very quickly Jared's passion for farming, and so when we made the decision to come back and try to farm on our own, it made sense to me," Rachel continues. "I had no doubt God's plan for Jared was farming, and I did not want to stand in the way of that. There were feelings and insecurities I had to work through, but looking back it has only made our marriage, and who we are, stronger."

It was a gesture of generosity that launched the Kunkles' operation.

Rachel's uncle, Milo Sprout, was handling 80 acres for his aunt. He offered to rent it to Jared in 2008. It gave the Kunkles a beachhead into farming.

"Rachel's uncle gave us a shot," Jared says. "And he supported us. He still supports us to this day, jumping onto a piece of equipment when I need an extra person." Jared and Rachel have talked about her uncle's act of generosity -- a profound gesture that they prize. They look to a day when they might do the same for someone else.

The sports-management graduate moved deeper into farming. Jared went to work with a local farmer, trading labor for seat time in his equipment, to farm those 80 acres. By 2011, the Kunkles were renting local ground from an investor and from Rachel's grandparents.

There was a five-year stint of custom harvesting. "It does not lead to a very good home life," Jared admits. Daughter, Ada, was born in the middle of that. "For those five years, I was nonexistent in the family during harvest."

Rachel found herself stretched between Ada and work at Caterpillar, an hour away. She worked as a cost accountant in manufacturing. "So, I dropped a bomb on Jared," she says. "We were trying to farm, and I was driving a little over two hours round trip to my full-time job with a baby at home." She and Jared talked about how she might step back from her job.

"He talked with our lender and went to bat for me. We knew we needed off-farm income, but how much and keep peace in the family?"

They found the answer. Rachel left Caterpillar. Today, she keeps the farm books and splits duties with their insurance company partner, Julie, to write new business. She also prepares monthly reports for the Kunkles' largest farm-management client. Ada is now 11, and the Kunkles' son, Jayden, is 9.

WORK MADE IT WORK

Jared is sometimes asked how Kunkle Farms got its feet on the ground. "It's doing a lot of things that I didn't want to do," Jared says. "I drove a semi. I did carpentry work, worked for an electrical contractor, snow plowing in the winter, even taking farm research surveys, you know, for that $100 meeting. Whatever it took for us to take that next step."

Rachel noticed. "I was very appreciative of the fact he was willing to work so hard, his willingness to work things out even if it was a way not everyone did. I'm sure not every day it came across. But I think we both really understood where we were in that stage. If we were going to make a go, this is what we needed to do."

It is an effort together. "Rachel is my partner. We have found that communicating with each other has helped us in our marriage as well as our business," Jared says. "We see each other as equals, and I wouldn't want to do this with anyone else, because she always has my back."

Watch the video about Jared and Rachel Kunkle at https://www.dtnpf.com/…

This is the fourth of five profiles of our 13th class of America's Best Young Farmers and Ranchers sponsored by DTN/ Progressive Farmer. They are among the best of their generation who have chosen agriculture as a profession and lifestyle. The annual award recognizes five farmers and ranchers who best represent the pioneering promises of American agriculture: Farmers and ranchers who are innovative, imaginative and who work to improve their communities.

See all the 2023 America's Best Young Farmers and Ranchers Winners, as well as information on how to apply for 2024, at https://spotlights.dtnpf.com/…

If you missed other stories in the series, go to: 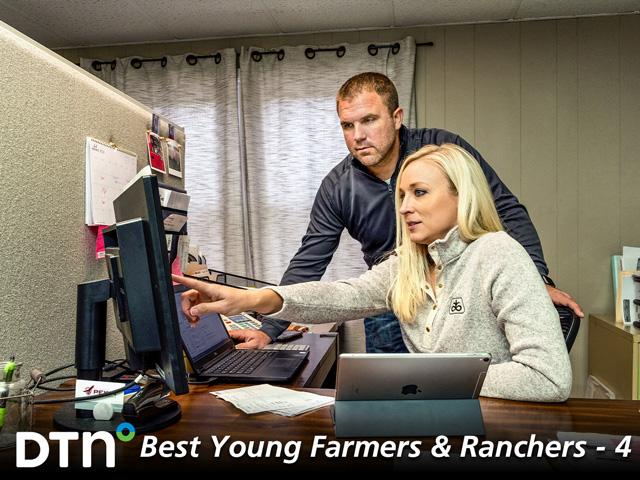