Roger Smith and his mother, Sheryl Terry, walk through 40 acres of soybeans near Wheatley, Arkansas. For the Smiths and their relatives, this is home base, the heart of a farm purchased first by Roger's great-great-grandmother, Idella Cantrell.

"When I started farming, the first piece of ground I was able to get was my family's 40 acres that my great-great -grandmother and her husband purchased," Smith says.

The piece was 80 acres originally, but 40 acres were sold so the family could keep the other half. "We've held on to it ever since," he adds. "I've been farming it since 2011. Before I farmed it, my uncle, Larry Terry, farmed it and before him, his dad, Nelson Terry. We've kept it in the family."

It is treasured soil. "It's nice to have something that your family has held on to and been passed down through the generations," Smith explains. "I'm thankful for that. And, thankful that I've been able to hold on to it."

Smith's farming story is about family land but also marked by mentors -- other family members, advisers, local farmers and businesses, some simply giving him a helpful break when it was most needed.

Smith oversees about 4,500 acres with a partner. His operation, most of it leased, is 2,500 acres of corn, soybeans on 38-inch rows and wheat. He tends rice and plants milo some years. The farm is about 75% irrigated, water flowing through polyethylene pipe tubing. Water for the rice comes from Big Creek, pumped over steep banks by an old John Deere 820 -- all of three cylinders, 32 horsepower and diesel-powered. Dryland crops struggle in the Arkansas heat and sun, especially this year when there have been weeks between significant rains.

Rice is a crop compatible with the soils here. "The rice really thrives in these heavy clay soils," Smith says. In most years, the rice goes into the ground during May. "It's a little behind, but it's coming along. We're fighting through some grass and weeds," he says. Smith sells the crop to Riceland Foods and Erwin-Keith Inc.

MORE THAN A FARM

Smith enjoys farming. By age 3, he was sitting on the fender of the tractor with his uncle. "My grandma wasn't excited about it," he recalls, "but he got me interested in farming. When I began farming, he helped me every day. My grandfather, the same way.

"When I'd get off the school bus and see combines down the road, I was like, 'Grandpa, we're gonna look at the combines?' He's like, 'Yeah, we'll go.' We'd sit on the edge of a turnrow and watch the guys harvest."

"I was learning a lot out there," Smith says. He remembers during that time talking to his youth mentor about the work. "He asked me, 'When are you going to get your own farm?' I said, 'I don't think anyone will give me a farm.'"

Smith's ongoing challenge is land. He points out as a young producer, you don't always get the best land. "The lion's share (is ground) the big guys don't want, or you get lucky on some and some people give you a shot."

Looking to expand his acres, the first landowner Smith approached turned him down. He went to a second just down the road. He asked about a lease. "Man, I tell you what," he told Smith, "you're young but I'll give you a shot. So long as you can pay me, I'll give you a shot."

"So, he gave me a shot," Smith says. And then the landowner who previously turned him down called. They talked, and he said, "'We'll rent you our land, too.'"

That first year in 2011, Smith began farming 430 acres. "And, from there, we've just kept growing and growing." Add the Trice brothers and the Littles, his first landlords, to the list of people who have partnered with Smith.

His strategy is straightforward. "Treating people right," he says. "You may ride by (a home) and see them out in their garden. Stop and grab a hoe, and help them chop the garden. Sit around and talk." Most importantly, pay them a fair and competitive rate to farm their land. Don't try to deceive them, he says.

That approach has served Smith well. He recalls a landowner offering to lease him land. "I told her, 'Well I'm paying everybody else this amount,' which was a little bit more than she was asking. 'I don't see anything wrong with your property, I'd offer you the same as I offered them,'" he told her. "You can't let people run over you. But, you know, sometimes just doing people right? It goes a long way."

His reputation grows in a positive way because of how Smith treats people. There was the time he accidentally killed a nearby garden when he was spraying a field. He paid for the damage.

Unfortunately, the relationship with the garden owner remained sour. That is, until a 10-inch snowstorm. Smith saw she was snowed in. "I'm going to try to ease tensions," he remembers thinking. "So, I went down there with my tractor and shoveled her yard." He started her car and knocked the ice off it, too. "We get along good, now. She lets me know when she's got a garden planted; I know not to go over there (when spraying)."

Smith feels like he's been blessed, as a young man and a young farmer. Neighbors watch how he manages his business, and Smith's solid reputation has brought him grace from fellow farmers.

For example, one neighbor, Darren Lee, let him borrow his bedder roller when Smith couldn't afford one his first year farming. There was the day his previous boss, Mark Gerrard, was driving by a corn field Smith was planting his first year farming. "He didn't like the way it was looking," Smith explains. "He said, 'I'm going to send a tractor over there and help. You need to do better, because I taught you better.' I've just been blessed to have people come and help me out along the way."

Finding and financing land is particularly tough for someone just getting started in farming. USDA assistance programs can help young farmers, but bankers want collateral when reviewing a loan application, something farmers like Smith usually lack.

He says it took five years to find a bank that would work with him. "I got a lot of rejections before then. But I had some folks that carried me -- local seed companies and dealers carried me along and kept me in business. It meant a lot, and I'm thankful for those people."

The bank that wrote the mortgage in 2019 was on Smith's first piece of purchased land, 120 acres planted to rice this year. Ironically, it was owned by the first landowner who chose to give him a shot. As it turned out, so did the bank. "The bank stepped up. They said, 'You don't have quite enough collateral, but we'll make it work,'" Smith says.

It's an important piece of property to Smith. "It's a great feeling to work some land that you actually own or you are working toward owning it."

At the end of day in late July, sun breaking out from behind building thunderheads, Smith stands at the edge of 80 acres of waist-high Beck's Hybrids soybeans that were planted a few weeks earlier. The field is located off of Lee Road 902, in Garrett Grove, a crossroads marked by Garrett Grove Cemetery. Little Piney Creek cuts under a rough dirt road leading back to Smith's field. "One of the things I love about farming is, after all the phone calls stop coming, you can walk out here and look at a field of beans that you planted, they're growing, they're happy," Smith says.

"And, it just makes you feel good. I mean, you plant the seed, and it starts off from nothing. They still have got a long way to go," he says, looking out over the field surrounded by stands of hardwoods. "But they got off to a good start. This gets you motivated to keep going."

Watch the video about Roger Smith at https://www.dtnpf.com/…

This is the third of five profiles of our 13th class of America's Best Young Farmers and Ranchers sponsored by DTN/ Progressive Farmer. They are among the best of their generation who have chosen agriculture as a profession and lifestyle. The annual award recognizes five farmers and ranchers who best represent the pioneering promises of American agriculture: Farmers and ranchers who are innovative, imaginative and who work to improve their communities.

See all the 2023 America's Best Young Farmers and Ranchers Winners, as well as information on how to apply for 2024, at https://spotlights.dtnpf.com/…

If you missed other stories in the series, go to: 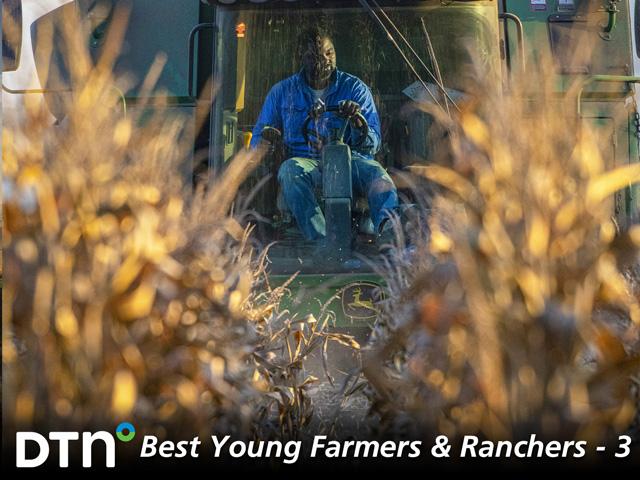