WASHINGTON (DTN) -- Up Top Acres co-founder Kristof Grina figures his company's foray into urban agriculture will be part of a solution to many pressing problems in Washington, D.C., and other large cities on the East Coast.

During a tour with a group of agricultural journalists in Washington last week atop a building owned and operated by commercial real estate developer Cushman and Wakefield, Grina said rooftop agriculture is growing in popularity in places like New York, Boston and D.C.

However, his company has been unable to achieve economies of scale where it makes economic sense to sell produce to traditional food outlets.

"We figured out that that's not really a good way to make a living with all the challenges that farmers face in more traditional settings at ground level," he said.

"We can't get to the economies of scale. We have trouble with logistics. We used to sell it sort of in the standard distribution outlets that a small farm would have through CSA (Community Supported Agriculture), farmers markets, wholesale to restaurants in small markets."

In 2021 alone, Up Top Acres donated more than 1,000 pounds of greens, cucumbers and herbs. The farms turn out about 80,000 pounds of produce annually.

Up Top Acres makes its money by working with building owners, property managers and developers who want to develop otherwise unused spaces -- all centered around establishing agriculture as a fixture of city life.

"You came up that loading elevator," Grina said to reporters. "That's how everything's going up and coming down. We've got to aggregate at different sites in one place. So, it's those challenges that are just a logistical nightmare, and as a result, all of our labor costs go up."

Up Top Acres has been able to convince building owners to contribute funds to cover operating costs, helping property owners to spiff up unused spaces and reduce stormwater runoff while producing food.

The company is then able to distribute produce at a low cost to partner organizations working in D.C. around issues of food access and economic development around the food industry.

Federal programs to support urban agriculture are largely undeveloped. In February 2022, however, USDA announced the selection of 12 people to serve on the inaugural Secretary's Advisory Committee for Urban Agriculture. The group of urban producers is expected to provide input on policy development and to help identify barriers to urban agriculture.

Up Top Acres has a total of eight employees, including co-founder Kathleen O'Keefe and green engineer Nick Berini, who work hands-on across the company's farms.

The farm at the Cushman and Wakefield site, Grina said, includes a soil-less media blend of compost, sand and other aggregate at about one foot deep that covers 18,000 to 20,000 square feet. The farm was installed during the building's construction to engineer the roof to be able to withstand about 80 pounds per square foot of weight.

Having the farm atop the roof, Grina said, allows the building to slow the rate of flow of stormwater runoff.

Cities in the Chesapeake Bay region contribute most of their pollution from sewer stormwater runoff. Buildings with rooftop farms, he said, usually see much longer roof lifespans than other buildings. That's because crops protect roofs from the elements.

Rooftops are ideal for growing vegetables, Grina said, as starting in early spring through fall, the crops have direct sun from sunrise to sunset.

"So, once we get into freezing temperatures, it gets cold and stays cold quickly up here," he said.

"So, we put in warm season crops early, and they last until first frost. Another unique thing up here is that we have the best ventilation you'll ever get. So, we plant one crop of basil in the spring, and we harvest it until November, and we don't have any mildew, we don't have any blight.

"This is more or less a sort of production center, and because this is an event space that we programmed as well, we sort of tried to have a variety of things growing."

Grina said his company models itself after a New York City-based company called Brooklyn Grange, although the real estate market in D.C. differs significantly. Buildings in New York are much larger than in D.C. Many New York buildings have individual roofs spanning three acres.

Up Top Acres donates food to food banks and nonprofit groups, including Dreaming Out Loud, which is a food hub that operates farmers markets and a culinary incubator program. Grina said his company plans to expand its operation into other East Coast cities, including possibly Baltimore and Pittsburgh.

"A lot of new buildings are being installed with green roofs also being installed to meet LEED (Leadership in Energy and Environmental Design) green building certification requirements," Grina said, although Up Top Acres can do projects on existing buildings.

LEED is a third-party green building certification program used around the world, focused on establishing high-performance green buildings and neighborhoods.

"And so, basically, we're telling buildings, 'You're already installing this for instance, it's already been installed and you're paying to maintain it and it's been maintained poorly,'" Grina said.

"We can enhance it. We can add another layer, another function to it and have it still perform all the tasks that it was doing before. You're getting really good marketing." 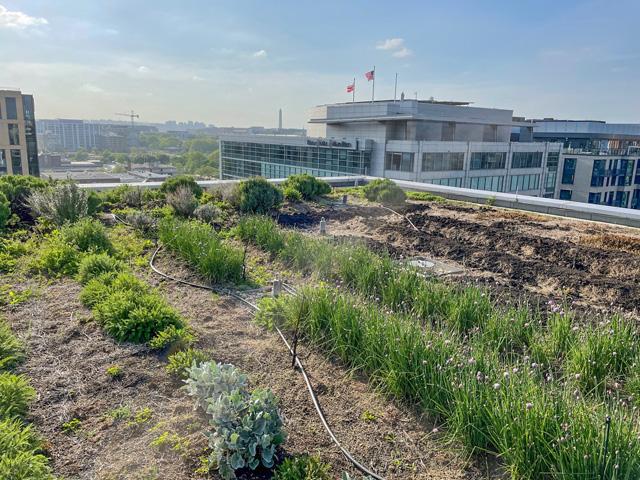