TOOMSBORO, Ga. (DTN) -- Wanting to develop generational wealth and a sense of place for a Black community, 19 Atlanta families have invested their money and time during the past year looking to develop a farm and possibly even a new community outside a small town.

Doing that successfully, though, means learning how to turn their investment into useful farm ground.

The project began out of anxiety brought on by the pandemic, along with the racial unrest that came from the murders of Ahmaud Arbery in Brunswick, Georgia. A small group of Black professionals began looking for land where they could hold camping weekend getaways and feel safe.

"The investment opportunity was born out of the need for Black Americans to create a space where they can feel safe for themselves and their children, as well as stimulate some generational wealth," said Tabitha Ball, a clinical psychologist in Atlanta. "And so, when I heard about this group, I got really interested and excited about it."

Ball said she and her husband, Greg Mullins, found out about the initial land investments through a client who had heard about other Atlanta professionals getting together specifically to look for land outside of the Atlanta metro. Ball is now a managing director on the project.

After taking part in an informational call, Ball and Mullins jumped in, she said. From that investment sprang the Freedom Georgia Initiative (FGI).

"And here we are now talking about a farming project," Mullins said.

Early on, the group bought 97 acres primarily as a spot to set up some campers for weekend getaways near Toomsboro, a town of about 700 people surrounded by woodlands and pasture ground about two hours southeast of Atlanta. Their initial purchase gained a lot of attention around Atlanta, but that sparked the families to begin looking for ways to invest. Last summer, they bought another 404 acres nearby that became available. The family-investors started talking about ways to get involved in agriculture and finding ways to invest in the local economy. They came up with the name "Freedom Georgia Initiative."

The families who are investing in the property want to go beyond a simple farm. They want to build a town, "Freedom," they call it. They have used crowdsourcing to raise funds and connected with organizations focusing on promoting Black-owned investments. The development is starting to parcel out tracts to sell to groups and families that want to help develop Freedom.

The idea of buying land around Toomsboro started from advertisements that the town was for sale. Instead, there were hundreds of acres of land outside of town being marketed. Toomsboro is in Wilkinson County, which has a population of about 9,000 people and is about 45 minutes from Macon, Georgia. The area remains popular for timber and hunting ground, but economic development hasn't exactly caught fire there. Just under one-quarter of the county population lives below the poverty line.

"They are looking for us to help grow the area and help populate the area and bring in more opportunities," Mullins said. "Because once the timber business left, you know, so many jobs were just taken away from here, and that's when the decline started to happen in the area."

While the families bought the land collectively, they see the need to develop agriculture on the property out of necessity. "We want to grow food to actually eat and be more self-sustaining, but also there aren't a lot of jobs here, and we want to bring jobs and businesses down here to grow," Mullins said.

The property development may have started with the notion that these families wanted to create a place where it's safe for them to enjoy the land, but they also wanted to learn how to build value in the land, Ball said.

"Many of us had families that had farms. I know my grandfather had a farm, but we're a little bit removed from that at this point. Many of us are professionals, and so we don't know what we're doing. So, we've had to consult with the experts, the professionals, that can get us to where we need to be so we can do this correctly," Ball said.

GETTING A PROFESSIONAL CONSULTANT

While Mullins, Ball and other investors in the properties have some vision on where they want to go, they brought in an Atlanta-area farmer/livestock producer as a consultant to help get the farming side of the project moving forward. Wayne Swanson was once an insurance claims manager, but always had a desire "for a bigger yard" when he bought a piece of property and his dad suggested he put a few cows on it. From there, he built up Swanson Family Farms and started selling grass-fed meat. Swanson found his niche specializing in meat production and selling beef direct to consumers.

"I'm a guy who was in corporate America and decided to buy some land and get started," Swanson said.

One challenge he found along the way was establishing a long-term relationship with small processors. Swanson said he'd lose shackle space if he questioned the volume of particular meat cuts he was getting from the meat lockers. Sometimes he would get more meat than what he sent into process, and sometimes he would get less. Swanson would butt heads over the inconsistencies.

"I had a pretty good idea of what my customers wanted and was looking for, and we would take in the same weights and animals we were breeding and we were looking for a consistent carcass so we knew what we had from a production standpoint," Swanson said. "So, what happens? I guess it's everywhere, not necessarily in the South, but when I would go into a new butcher shop, they were not used to seeing a Black guy come in. They didn't think I knew what I was talking about, or they didn't think I had that data to show what I was talking about."

Meat cutters didn't like the scrutiny, Swanson said, and he found out working with processors that there is an overall shortage of qualified meat cutters in Georgia and surrounding states.

Swanson ended up selling much of his initial farm operation when development in the area surrounded the ground, but said he still maintains a herd of cattle and marketing beef.

Now consulting with FGI, Swanson is working with state agencies and USDA to see what kind of programs can be tapped into to help develop the ground. That includes looking at conservation programs, he noted. One of the first goals, ideally spurred by grazing, will be to regenerate some of the depleted soils on the property. Swanson said he recently met with local USDA Natural Resources Conservation Service (NRCS) staff to see about possible enrollment in some conservation programs for certain practices.

If the project develops as planned, Swanson would like to see the project become large enough to start not only a small processing facility, but also an educational component to help train young Blacks to learn about trades such meat cutting.

"We want to have a processing for meat and fruits and nuts as well." Swanson added, "Although we're not separatists, we do know there's a need to have space operated by Black folks. We want to get geared towards farmers that have direct-to-consumer options. We want to get as many people buying directly from the farmers as possible."

At the moment, USDA also has an influx of funds -- as much as $1 billion -- to develop more meat-and-food processing in underserved areas. Swanson said it would be nice if the Freedom Georgia Initiative were able to tap into some of those funds, but the project isn't relying on government support.

"We're not hedging all our bets on that. If we have access, that would be great, but we think that we've got a good enough plan, and we think there is demand and we have the expertise that we can get funding," he said. "We're trying to find a way to do it ourselves and invest in this area."

OTHER INITIATIVES TO GROW BLACK FARMERS

The Freedom Georgia Initiative isn't the first in Georgia to look at the concept of a farm and community for Black farmers. In 2011, Shirley Sherrod, a former USDA Rural Development leader in Georgia, and a team of people began developing Resora, a 1,638-acre former plantation near Albany, Georgia, now operated by the New Communities Inc. land trust. The property is set up as a retreat and agricultural education center. The group is a 501(C)(3), the Charles Sherrod Community Development Center, that operates the farm to teach youth, especially young Blacks, about modern agricultural practices.

The Charles Sherrod CDC was spotlighted last week in Atlanta when Agriculture Secretary Tom Vilsack met with a mix of Black producers and community organizers who are working on different farm projects across Georgia. USDA signed a memorandum of understanding with the Federation of Southern Cooperatives/Land Assistance Fund that will allow the cooperative to work with landowners on the requirements for USDA programs through NRCS and the U.S. Forest Service.

Dewayne Goldmon, a USDA senior adviser for racial equity at USDA, said there is a growing interest among Blacks to move back into rural areas and buy farm ground. Goldmon told DTN he wasn't aware of the specifics of the Freedom Georgia Initiative, but the growing interest of people to look for a rural safe haven and invest more in food production shouldn't be taken lightly.

"My suspicion is a great percentage of them would have a fond memory of growing up on a farm or some association with a producing farm. Maybe this is an attempt to get back into production agriculture and help us stem the tide of losing Black-owned farms," Goldmon said. "The whole notion that I can take an investment in food insecurity and have a fallback position, that's also something that has spurred an interest in farm property."

Ball noted she and other investors are part of a generation of people in their 30s and 40s who are mostly tied to a push for technology and office jobs. Now they are looking for another direction.

Video of Ball and Mullins talking about the Freedom Georgia Initiative and how it got started: 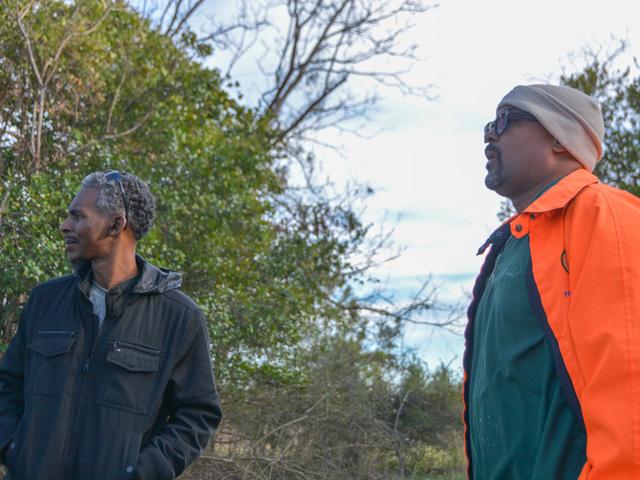