FREMONT, Neb. (DTN) -- Farmers are certainly not new to storing grain on the farm, but it is important to fully understand the basics to maintaining stored grain. This knowledge is vital both for grain quality as well as safety around stored grain.

Ken Hellevang, a North Dakota State University Extension engineer, touched on these points at a recent presentation at the 2018 Fremont Corn Expo held in Fremont, Nebraska. With more grain bins on farms and more farmers holding onto grain longer due to lower commodity prices, it is important for farmers to understand the different concepts of grain storage.

Hellevang said most corn going into long-term storage needs to be dried to below 15% moisture. He recommends storing corn to 14% to prevent mold growth if storing corn longer term.

There are many factors at work when it comes to how to keep grain in condition while being stored. In addition to the moisture and temperature of the grain, and the relative humidity, storability of grain is an important aspect to understand as well.

"If you have cracked, broken or immature grain, this type of grain spoils much easier," Hellevang said.

The differences in variation is another factor that could affect storability. A lot of the research on this subject is older research on older hybrids, so today's hybrids might have a different storage time frame, he said.

Hellevang said grain not stored properly can lead to mold issues as well as insect concerns. Mold issues are a result of not maintaining proper moisture and temperature levels in the grain, while insect issues are an issue from not paying attention to grain temperature and cleanliness, he said.

Moldy corn can lead to hazards both for the person handling the grain, and also to the grain bin itself.

Hellevang said breathing in moldy corn is a major health hazard and can leave handlers with severe reactions. Grain bridging spontaneously while unloading can lead to people getting caught in the flowing grain and can also affect the structural integrity of the bin, he said.

As the bin is being unloaded, no one should ever be in the bin, he said.

Even grain stored at correct moisture levels can have storage issues. Once the grain enters the bin, it can be affected from temperature changes within the bin.

Fall and winter moisture migration within the bin could cause condensation in the middle of the bin at the surface of the grain. Corn with a moisture of 14% could see the top middle with a temperature of up to 24%, Hellevang said.

In addition, spring and summer moisture migration can also increase the moisture content of the grain but only by about 0.5%.

Hellevang said aeration is key to storing grain, especially if the grain is going to be in the bin longer term. Grain needs to be cooled to prevent mold and insect issues, he said.

Investment in aeration can be very inexpensive insurance. He gave the example of a 42-foot bin with 39,900 bushels. He calculated it only costs about 1 cent per bushel for insect and mold protection.

Sensors and fan controllers are tools farmers can use to help monitor the condition of storage grain. Most systems use moisture sensors or cables within the bin, which send the readings to different types of electric devices.

While these sensors are helpful, Hellevang pointed out it is still important farmers keep a close eye on stored grain. Hot spots in areas away from the location of the sensors will not be picked up by the cables, he said.

Hellevang added that coring and leveling bins are basic practices to avoid running into issues with grain quality. Removing the core, or middle, of the bin, where fines, miniscule grain particles, are often found, limits material within the grain that could spoil and affect grain quality.

Those wanting more information about grain storage and drying can visit NDSU's website at: https://www.ag.ndsu.edu/… 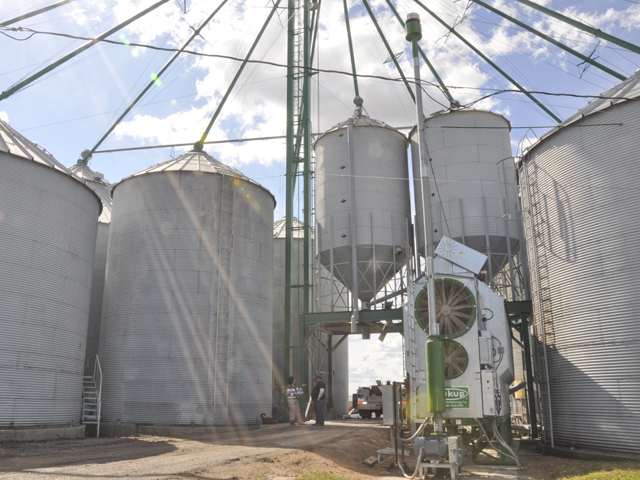