WASHINGTON (DTN) -- Ron Suppes told members of the House Agriculture Committee on Wednesday he would rather be back in Kansas planting his spring crop, but protecting international aid from budget cuts was important enough for him to take time out just to explain it to them.

"If I didn't think this is important, I shouldn't be here, but I am," said Suppes, a wheat producer from Dighton, Kansas, and a former chairman of U.S. Wheat Associates.

The House Agriculture Committee held a hearing Wednesday on international food aid in the farm bill that drove home debate on President Donald Trump's budget for foreign aid. While some lawmakers highlighted the current national debt and the burdens on the future, supporters of strong international food aid programs said heavy emphasis on food aid saves on defense costs.

Still, Conaway pointed to $20 trillion in debt that will lead the U.S. to making harder choices down the line.

"We have mortgaged our own children's future doing good things," Conaway said.

"Don't be worried about a country such as Tanzania becoming a competitor in growing wheat," Suppes said. "They are in a tropical environment and are more apt to compete with fruits, vegetables and things like that."

The federal government also is buying wheat for foreign aid at the same prices as the open market, Suppes noted. Along with that, Suppes told lawmakers that countries receiving food aid from the U.S. often become food buyers in the future. Suppes pointed to Nigeria being a major customer in hard red winter wheat, for instance.

"Once you give them your product and you feed them, they become accustomed to it and they like the quality of it," Suppes said. "Eventually they start buying a little bit."

Thomas Jayne, an agricultural economist at Michigan State University, said helping other countries develop their agricultural sectors also is in the U.S. national interest. Countries normally are developing crops that do not compete with U.S. exports, but U.S. farmers benefit from rising incomes in the developing world.

"So the potential here for win-win for U.S. agribusinesses and farmers cannot be overemphasized," Jayne said.

Jayne noted China is also working aggressively on agricultural development in Africa. If the U.S. were to follow proposals to eliminate food aid, it could hurt U.S. farmers down the line. It is possible 10 years from now trade in Africa would be locked up by other countries that continued to invest in food aid.

Suppes added that food aid is probably the fourth-largest customer for wheat producers. Wheat overall makes up more than 40% of the crops used for food aid.

"We have enough surplus that no one should be going hungry," Suppes said.

Dollars spent on aid save five times as much for military spending and disaster aid later on. Aid promotes long-term "soft power" in a region. Food aid is also a deterrent for more costly battles down the line, such as a country collapsing into instability and become a hotbed for terrorism, said Navyn Salem, a former aid worker and now CEO of Edesia Nutrition in Kingstown, Rhode Island.

"If we want to fight terrorism, feeding people is one of the most effective tools we have for peace and stability," Salem said.

Witnesses also revisited arguments over whether to directly ship U.S. commodities to countries during a crisis or use cash funds to buy food from more regional sources.

Brian Schoeneman, representing the Seafarers International Union (AFL-CIO) on behalf of USA Maritime, defended the use of the maritime fleet to send U.S. commodities to regions facing food shortages. Schoeneman said U.S. food aid has been "subjected to a protracted campaign" to shift from direct food commodities to cash assistance. He called on Congress "to ignore the siren calls for 'greater flexibility' from the so-called 'food aid reform advocates.'"

The U.S. merchant marines have lost jobs and ships have been put out of commission because of the decline in direct food aid and the shift to cash contributions already. Schoeneman also called for a rollback in the current cash aid and moving the food-aid programs back to the U.S. Department of Agriculture.

Some lawmakers attacked the president's budget. Rep. Marcia Fudge, D-Ohio, stressed that leadership requires responsibility on the part of the U.S. That means the country cannot eliminate food aid, she said. "It is immoral, it is heartless, and it is not even strategic for our world relations. It cuts jobs in this country. It is the most ridiculous thing I have ever heard," Fudge said. 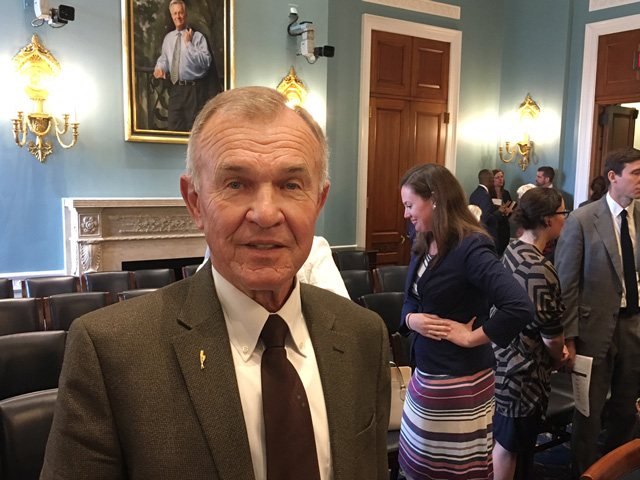