CHICAGO (DTN) -- As the U.S. sees its own economy improving and transitions to a new presidency, farmers will want to keep watching the economic situation in China and the impact that a slow down in China's growth could have on demand for feedstuffs.

Tom Scott, CEO of Informa Economics, spoke Monday at the DTN/The Progressive Farmer Ag Summit in Chicago about overall economic trends in the U.S. and some concerns over the horizon with China as a major trading partner for agriculture.

While recovery in the U.S. economy has been slow and steady, the country is projected to end the year with an average overall 1.6% growth in gross domestic product, but also forecast to see GDP grow 2.7% in 2017. "Right now, the trajectory of the U.S. economy is fairly positive," Scott said.

Scott took a look at some proposals by President-elect Donald Trump for the economy. Trump's tax-cut plan, for instance, could translate to adding $6 trillion to the budget deficit over the next 10 years. Scott noted the U.S. is eventually going to have to come back around and address its deficit issues.

Yet Scott also pointed to Trump's push to pump more investment into U.S. infrastructure. Trump has even mentioned infrastructure issues such as port dredging to spur more trade, which Scott highlighted.

"There's potentially going to be an explosion in infrastructure," Scott said.

Yet, Trump has also now put the Trans-Pacific Partnership on life support, and Scott said that is a concern as China moves to advance its own regional trade agreement in Asia.

Scott noted U.S. agriculture right now has a supply problem that needs to be worked through. From a demand standpoint, Scott said the U.S. should start shifting to other growing areas of the world such as sub-Saharan Africa, Egypt and India.

Still, for agricultural trade, the slowdown of the Chinese economy is a concern. It is not unexpected because China's rate of economic growth was unsustainable. The question becomes whether China's economy will have a hard or soft landing before its economic growth settles in.

"Be prepared for bumps along the way that impact agriculture," Scott said.

When it comes to bubbles in the China economy, economists have been watching the country's real-estate market. There is a lot of concern that China's real-estate industry is loaded with speculative construction and sales that could come crashing down, a situation that could be similar to the U.S. housing crisis eight years ago.

Outside the real-estate bubble, China has been implementing some policies to slow the movement of money out of the country. Early in 2016, there was an explosion of Chinese companies buying foreign businesses such as ChemChina offering $43 billion for Syngenta. Chinese officials are now clamping down on that buying spree.

Just over the weekend, China's concern over "capital flight" led policymakers to restrict the flow of money by multi-national companies. Firms had been able to move out $50 million at a time pretty easily, but the policy change could dial that down to just $5 million at a time. "So they are getting worried about capital outflows and they are getting very worried about not being able to control the value of their currency," Scott said.

Under the theme of "Farm Strong," the 10th annual DTN/The Progressive Farmer Ag Summit continues through Wednesday in Chicago. 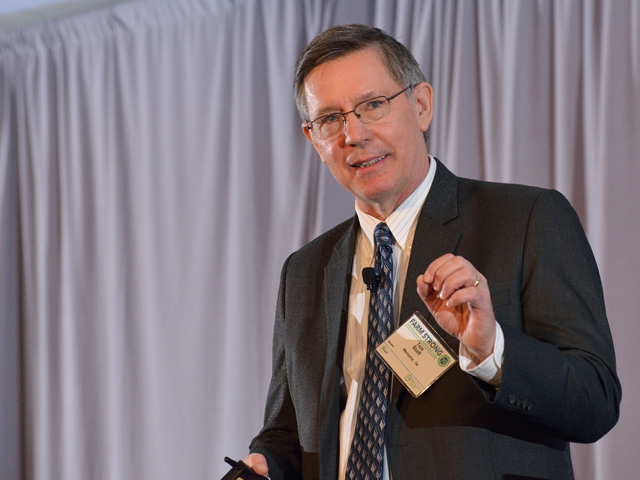