VEGA, Texas (DTN) -- Everything is bigger in Texas, except Route 66.

Texas is home to only 175 miles of the Mother Road, which stretches across the midsection of the Panhandle. Nonetheless, a traveler can find a row of spray-painted Cadillacs half buried in the Plains. On the west end of the state is also the midpoint of Route 66, noted by a marker across the highway from a small cafe.

Amarillo also is probably the one place along Route 66 where you are guaranteed to find a 72-ounce steak any night of the week -- not that eating a 4 1/2-pound steak at the Big Texan Steak Ranch is necessarily advisable.

There are a few sizeable feedyards along Route 66/Interstate 40, but a traveler might not get a full appreciation of just how much cattle feeding there is in the area. The Texas Panhandle is cattle-feeding country. Roughly 88% of the approximately 2.5 million cattle on feed in Texas at any one time are concentrated in 10 counties within about a 120-mile radius of Amarillo.

While cattle-feeding remains a dominant industry in Texas agriculture, drought has shaved feedlot numbers, dropping them from nearly 3 million head in 2011 to just under 2.5 million head now. Yet, despite perceptions, Texas Panhandle feeders are stocked with roughly the same number of cattle the industry had on feed in the late 1990s.

What has changed is there are more cattle on feed in states such as Nebraska, Kansas and Iowa. "We are kind of seeing a little bit of a shift back north because of ethanol in the Midwest and byproducts such as distillers grain," said Robby Kirkland, who operates a 20,000-head feedlot just outside of Vega.

Kirkland's father is an area farmer who bought a 600-head feedyard in in 1983 and began to enlarge it. Besides the feedyard, the Kirkland family also still has a farm and ranch operation with roughly 10,000 acres. "That is part of our portfolio, so to speak. We originally were farmers."

Despite recent drought, the Texas Panhandle still offers the climate to feed cattle and adequate access to feed. Cattle feeding also developed heavily in the area because that's where meatpackers wanted to locate.

"When the packing industry took roots here, that's where the cattle kind of came to," said Kirkland, who is 42.

The smaller cattle supply in recent years has caused at least one major packer -- Cargill Meat Solutions -- to close a plant in 2013 and close a feedlot. The lack of feeder cattle nationally has translated into a summer of record high cattle prices.

"Cattle right now are making good money coming out of the feedyard," Kirkland said. "It's been a good, profitable time in the industry and that's because of the lack of supply."

The lack of supply and continuing demand much of this summer meant cattle were pulled forward and moved to the packers, which has put a lid on carcass weights as well. "The biggest thing we are seeing there is the cattle are making so much money that the packer demand is good, so we have been pulling cattle forward a little greener because the packer needs the cattle," Kirkland said.

In recent weeks, the cattle futures have dropped precipitously, taking $15 off the October contract from a $160.70 high at the end of July.

"We were just so crazy the first half of the summer," said DTN Livestock Analyst John Harrington. "We're at a point where we have kind of run out of the really new, exciting news to talk about and I think we were victimized a little bit by a seasonal selloff in the hog market. Then we are seeing that record corn crop as we get closer to harvest. That typically means more meat production."

Cattle will be challenged in the retail sector because poultry and pork producers are able to more quickly increase production in response to lower feed prices, Harrington said. "Cattle are going to be down for a couple more years in terms of production because you can't turn the light switch on so easily, but the bet is we are going to produce a lot more pork and lot more chicken. Those are some of the things we are worried about all of a sudden."

Declining grain prices married with overall higher cattle prices would initially look like a dream, but Kirkland said the other factor to consider is the growing cost of bringing in grain by train. Fewer rail cars are available to deliver grain in the area because demand on the rail line keeps growing.

"It has been a bit of a challenge for us ... just from a cost standpoint and the basis has been the rail prices," he said. "Rail prices have just gone up. The oil and gas has just been a driver because they seem to have a little more money to ship."

Kirkland said he tries to feed as much local corn as possible. Yet, basis is in the mid-50- to 60-cents range over the national market average. Basis has run as much this year as a $1 over the national average price.

"What we are seeing is these elevators down here in the south are paying more so everybody's basis is going to get shifted," he said. "We have to ask what's that rail replacement going to cost and then we have to go compare that and show that with the local basis."

As a mainly custom feedyard, about 75% of the cattle Kirkland feeds are owned by customers. The feedyard has customers from throughout the Southeast. "We have got some customers that have a cycle of cattle that always come," he said. "It's nice to have good customers ... who stay on a cycle with us."

But Kirkland noted the industry is facing an aging population of cow-calf producers across the country. Higher prices this year have made it attractive for at least some of those producers to cash out. For their own cattle, the company may buy light-weight animals and graze them before sending them to the feedyard.

The feedyard is at about 70% capacity, which Kirkland said is a comfortable level for summer. Parts of the Panhandle have seen some good rains since mid-May, which helped shrink some of the worst drought designations across most of Texas, though the Panhandle still has areas considered in extreme or exceptional drought levels.

"We've had good rains. You can tell it's a little green out," Kirkland said when DTN visited in July. "It's been really nice since mid-May. We have had some good ample rains. The crops look good. Summer grazing looks good. We have got more cattle turned out than we have had for two or three years." 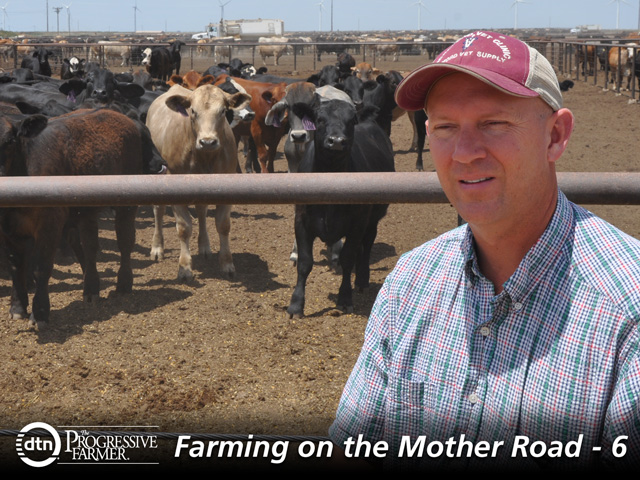