OMAHA (DTN) -- The American Soybean Association was among the groups crediting the White House for finding ways to incentivize farmers to double-crop acres and increase the use of precision technology while the administration also looks for ways to boost the production of domestic fertilizer.

On Wednesday, President Joe Biden used an Illinois farm as a backdrop to highlight his administration's moves meant to spur increased crop production in the face of global crop and food stresses brought on by the Russian invasion of Ukraine. "Farmers are the breadbasket of democracy. You really are," the president said.

"America is fighting on two fronts," he said, pointing to inflation and rising prices domestically, while in Ukraine for democracy, "as well as feeding those really hungry around the world because Russian atrocities exist."

Biden highlighted challenges in Ukraine, including 20 million metric tons of grain that cannot get out of the country into export markets right now. He noted the Russians have cut off critical access to the Black Sea and port cities. "If those tons don't get to market, an awful lot of people in Africa are going to starve to death because they are the sole supplier of a number of African countries," Biden said.

Biden also noted U.S. farmers have been slow to plant this spring because it's been slow and wet, though temperatures have dramatically jumped this week. It was more than 90 degrees Fahrenheit on Wednesday in the northeastern Illinois area where Biden spoke. The president said the cold, wet April put Midwest farmers "behind the eight-ball," but they are now catching up.

"They have been kept from getting into the fields and planting crops but, just to share, American farmers always find a way."

-- Precision agriculture: USDA will open programs such as the Environmental Quality Incentives Program (EQIP) and Conservation Stewardship Program (CSP) to prioritize precision agriculture technology for nutrient management or water efficiency in areas prone to drought. Those programs are already funded in the farm bill to encourage such aid and technical assistance.

-- Domestic fertilizer: USDA had initially committed $250 million to boost domestic fertilizer capacity. The White House has decided to double that funding to $500 million. At the moment, it's unclear how USDA will distribute those funds.

In Kankakee, Illinois, south of Chicago, Biden and Agriculture Secretary Tom Vilsack visited with Jeff and Gina O'Connor, who have 800 acres of wheat, corn and soybeans. The Connors are growing wheat that will be harvested in July, then followed up with double-crop soybeans on those acres. The Connors took time out of planting corn to meet with the president and other officials.

Jeff O'Connor, in some brief comments, said he was looking forward to using the crop-insurance protections to expand the prospect of double-cropping acres. "We have the ability to raise two crops in one growing season while simultaneously providing conservation benefits," O'Connor said. "These efforts need to be maximized."

O'Connor also told Biden, "The farming community stands ready to maximize production, which we do so well in this time of world need."

Biden noted in his speech that O'Connor likely won't be planting soybeans until at least early July, but the USDA expansion of crop insurance coverage for double cropping -- now available in 1,935 counties -- would provide more financial security to farmers such as the O'Connors. Biden noted double cropping comes with risks of bad weather disruptions that could throw off the O'Connors' production. "But it's a risk we need to take," Biden said.

Other groups also weighed in with their support of the White House plan.

Brad Doyle, president of the American Soybean Association, is also an Arkansas farmer who raises both soybeans and wheat. Doyle credited Biden for improving access to double-cropping crop insurance coverage, as well as providing technical assistance for precision agriculture. "We applaud this announcement and look forward to soybean farmers realizing the benefits," Doyle said.

Chuck Conner, president of the National Council of Farmer Cooperatives, said Vilsack and his team at USDA have been working since the Russian invasion in late February to address the turmoil in food and agricultural markets.

"The actions announced today can help producers meet demand in the short- and medium-term and will serve as the foundation for additional action to ensure U.S. food security in the long term," Conner said.

While Vilsack traveled with Biden to Illinois, the agriculture secretary also left later Wednesday to a G-7 event in Germany to see what actions can be taken to increase fertilizer production globally and look at ways to avoid export restrictions on food and fertilizer products. 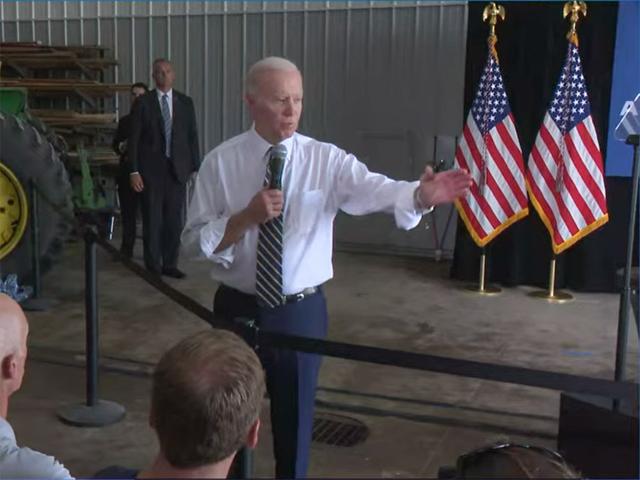