OMAHA (DTN) -- With oil reaching its highest price in nearly 11 years and OPEC nations opting not to increase production, the biofuels industry is clamoring for attention in the U.S. and calling on the Biden administration to support it.

At the National Farmers Union annual meeting this week in Denver, an executive for the world's largest ethanol producer, POET, highlighted biofuels as an immediate solution for both climate change and helping U.S. consumers avoid price shocks stemming from conflicts such as the war in Ukraine.

"We can make about anything out of a bushel of corn and biomass that we can make out of a barrel of oil today. It's just a matter of biotechnology and economics," said Doug Berven, POET's vice president of corporate affairs, addressing the NFU crowd. He added, "Bioethanol is immediately available, it's universally affordable, and it's clean. So, we should promote bioethanol and agriculture as solutions to climate problems all around the world. And we need to do that together. We're in this thing together."

The groups also asked the Biden administration to allow for year-round sales of E15.

"Now is the time to move quickly to put the RFS back on track to expand clean energy production, reduce emissions, and finally protect the economy from volatile oil prices. The administration also must act immediately to allow year-round sales of E15 through existing infrastructure, which will help hold down costs and reduce demand for oil imports," stated biofuel groups and backers.

"American-made biofuels are the only abundant, affordable, homegrown alternative to oil that can immediately extend the domestic supply of liquid fuels. It was the right solution when experts warned time and again that the Organization of the Petroleum Exporting Countries (OPEC) and Russia would not protect American drivers from inflated fuel costs," the groups stated.

At the NFU meeting, Berven told farmers reliance on fossil fuels ties up the global economy and makes it nearly impossible to meet global climate goals. He noted ethanol today has 50% lower greenhouse gases than gasoline. By 2030, ethanol has the potential to be 70% better than gasoline in greenhouse gas emissions. By 2050, POET and the industry have a goal of being carbon neutral.

"Bioethanol, biotechnology and agriculture can provide more than its fair share of decarbonizing the world without compromising our way of life," Berven said. "Without changing the status quo of our energy complex in the world, it's going to be nearly impossible to meet our climate goals."

POET produces about 3 billion gallons of ethanol annually, using about 1 billion bushels of corn from 50,000 farmers.

In an interview with DTN, Berven highlighted some of the regulatory hurdles now stacking up in front of the ethanol industry. Beyond the current annual holdup with RFS blend volumes, old vapor rules still don't allow blending of 15% ethanol in the summer in certain states. There's also a "discrimination" clause in the RFS that says regardless of how efficient grain-based ethanol is, it cannot be considered an advanced or cellulosic biofuel to accept more corn ethanol under the RFS.

EPA last updated its greenhouse gases model in 2010, but the agency just this week started a series of meetings with the Department of Energy and USDA. Berven said POET has been meeting with officials to discuss ways to change the modeling to provide a fairer picture.

"If it was a fair market in the fuel market, we'd probably be 30% of the U.S. fuel market; but it's not," Berven said. "The bioethanol industry today takes market share from the most powerful political force on the planet. That's the oil industry. And as long as we are putting politics before progress, it's going to be very difficult for us to meet any of our climate goals. We're going to have to have cleaner liquid fuels in order to meet our climate goals."

"That has stopped automakers from building flex-fuel vehicles, and that has hampered our ability into the (E)15, (E)30, E85, whatever it might be, and we've got to get rid of those barriers," he said. "And it's so inexpensive to make a flex-fuel vehicle versus a non-flex fuel. All of the parts are exactly the same. It's really a matter of certification and computer programming."

At a time when oil prices are soaring, the option of converting vehicles to flex-fuel is one way to provide more domestic energy independence.

"Because when we have the next crisis like we do now -- with Russia and Ukraine and oil prices going through the roof -- we can make that transition," Berven said. "It's just so simple. It makes so much common sense. That is why I don't understand why they're not doing it. If we really want to declare our energy independence, we need domestic energy. What better source than from the American farmer and cleaner biofuels that cost the consumer less?"

Berven said he's often asked about whether he's worried about electric vehicles taking over. "My reaction is, absolutely not. I think the electric vehicle is coming. I think it's probably coming a bit slower than most of the models would suggest. And even as that does come, we're going to have liquid fuels around for a very long time, and we have to clean up those liquid fuels. So, whether it's the light-duty transport market, whether it's our introduction into diesel, marine or aviation, our industry has a long way to go."

Stressing the point that farmers can benefit from lowering global emissions, Berven said POET is trying to ensure farmers are compensated for their efforts.

"It's not fair to ask for solutions from farmers without compensating them for their efforts. That's critically important."

To that end, USDA just rolled out its $1 billion pilot project, the Partnership for Climate-Smart Commodities. POET is seeking to take a program it has used at one of its South Dakota plants with Farmers Business Network "Gradable" and apply for $100 million to broaden out that program. Under the program, farmers volunteer their information while POET and FBN track their carbon score. POET has done a pilot project around the Chancellor, South Dakota, facility that Berven described as "wildly popular." (https://www.gradable.com/…)

"Sometimes you have to sacrifice a little bit of yield in order to lower your CI (carbon intensity) score," Berven said. "No farmer is going to do that unless the yield loss is worth more than the yield gain. And so, there's got to be a value to the carbon, and we're trying to do that from a market standpoint, rather than a regulation standpoint."

Berven added the potential for biofuels and agriculture to add more value and use both the grain and biomass for more purposes is "virtually untapped." Yet perceptions hinder that ability, too, as people in the environmental community and others keep trying to pursue the perfect energy source.

"If we always pursue the perfect at the expense of the better, we'll always be stuck with the worst," he said. "There is no perfect solution. There are just degrees of better." 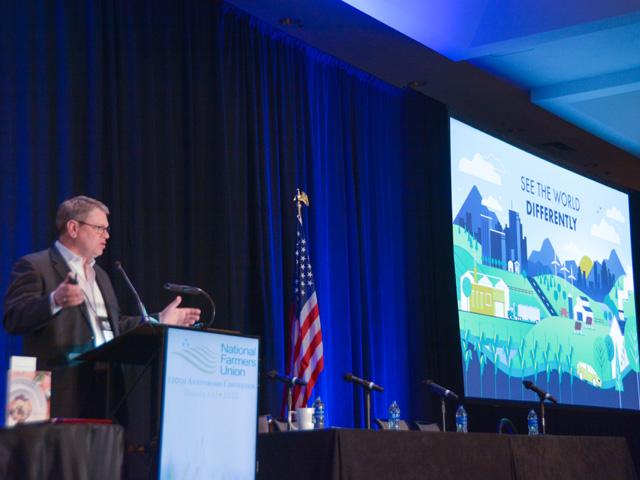