CINCINNATI (DTN) -- Agriculture is seeing short-term inflation and supply chain challenges in several ways, but the industry and the overall U.S. economy will continue to be pressured by demographic and technology changes going forward.

Those were just a few of the topics from speakers this week at the American Bankers Association Ag Bankers Conference in Cincinnati.

Speakers hit on multiple overlapping themes to provide food for thought as they think about their long-term lending and community businesses.

Farmers at the moment are seeing the best of both worlds -- high land values and high commodity prices.

Even with those higher prices, farmers are going to be looking to buy more land. Some of that will be driven by limited equipment supplies and high costs to develop buildings right now. Producers will look to increase their land and invest in that ground with tiling, for instance, to increase productivity.

Higher land price signals are out there and competition for ground will be fierce, said Todd Kuethe, chair of farmland economics at Purdue University. One major driver for higher land prices is that, typically, turnover in Indiana, for instance, is only about 2% to 2.5% in any given year. "So, land is really a thinly traded asset," Kuethe said.

"In the next year, we're going to see a lot of landowners trying to bid up rental rates," Kuethe said.

Gross Domestic Product has rebounded quickly since mid-2020, now driving inflation as a result. That ties into high amounts of Treasury money pumped into the economy -- as much as $8 trillion -- along with $15 trillion in foreign capital coming into the U.S. economy as foreign investors also look for protection from risk.

"There is a lot of money flowing into the U.S. economy," said Jason Henderson, associate dean and Extension director at Purdue University.

Looking at a historical comparison, the 1970s had strong agricultural exports, high land values, but also had supply chain challenges -- pointing to the gas lines that Americans faced at certain points im the 1970s. From 1974-81, inflation averaged 9.4%. To offset that inflation, government policy drove up interest rates.

Still, Henderson said fundamentals are different in several ways. Demographically, Henderson noted the Baby Boomers were coming into adulthood in waves in the 1970s. Every year added 2 million to 3 million more people into the workforce than people moving into retirement at that time.

Now, the average number of working-age adults is declining as those Boomers retire. "We have more people entering retirement age than we have teenagers coming into work," Henderson said.

That slower growth is going to challenge politicians making arguments about driving up higher economic growth.

"It's going be hard to be elected on 2% economic growth," Henderson said. "Our potential is 2% with the number of people we have and the increases in productivity we'll see. Is that going to be good enough?"

In agriculture, though, farming will be "Baby Boomer friendly," and that means they will not be easily giving up land as they embrace technology that will keep them in production on the farm, said David Kohl, professor emeritus of agricultural finance at Virginia Tech University.

3. PARADOX OF FOOD AND AG

That tie between limited labor availability and future productivity was repeated multiple times and tied into the need for automation.

"I don't think we will fix the labor issue any time soon, so we will have to increase automation," said Rob Dongoski, a partner at Ernst and Young in global food and agribusiness.

Dongoski highlighted multiple trends in food, including an increased shift toward plant-based foods. Ernst and Young (EY) forecasts 40% of all proteins by 2040 could be considered "alternative protein."

The increase in technology also will drive an expansion of indoor, urban farms, a move that is already taking place in some areas.

Technology is enabling changes in lifestyle, a drive that was increased by COVID-19. Before the pandemic, EY did not see older Americans moving to online grocery shopping, but the pandemic changed that scenario and older Americans were among some of the biggest movers to buying groceries online.

Michael Swanson, senior vice president and agricultural economist at Wells Fargo & Co., highlighted U.S. agriculture is good at exporting bulk commodities, but the industry needs to find ways to add more value to commodities before sending them overseas for processing. While the U.S. may have an overall trade surplus in agriculture, the country has a deficit in several food industries such as aquaculture and forestry products. He said the lending industry needs to support more businesses developing consumer-ready products. Right now, U.S. ag is often focused on the tons of corn and beans that will be exported.

"As an economy going forward, is that where we're going to find the best export markets?" Swanson said.

Swanson pointed to the Netherlands, a country that is a high per-capita importer of commodities but turns that into one of the highest per-capita exporters of food and beverages.

"They have high-cost labor and they are in a heavily regulated environment," Swanson said. But he added, "They work on their brand."

Daniel Basse, president of AgResource Co., said 2021 looks like a commodity "super cycle" that will carry into 2022. He noted the price moves began in energy and have moved into commodities.

Basse also said the U.S. right now is at "peak farmland" usage when more acres are needed. Basse criticized the Biden administration's push to try to increase acreage in the Conservation Reserve Program (CRP) by 4 million acres as well.

"We need more acres in production, and we're not going to find them anywhere," he said.

Basse offered an outlook on dairies, noting USDA is forecasting milk prices to move above $20 per hundredweight (cwt) in 2022. Basse pointed to a smaller cow herd with higher slaughter prices for cull cows. He forecasts prices for dairy in the second half of 2022 that could move into the $21-$23 per cwt range. The big risk for dairies right now will come from higher feed prices with smaller hay acres.

Another area to watch is the renewable diesel market, he said. Driven by California's low-carbon fuels standard, petroleum companies are retrofitting more refineries to produce renewable diesel from soybeans. That process is going to increase competition for soybean oil and meal.

"It's not getting enough talk in the ag community in my opinion," Basse said.

While there's a lot of focus on food inflation right now, multiple economists noted U.S. consumers have almost always been in a good spot when it comes to food supply and prices. Americans pay on average 7.8% of their income for food, the lowest percentage in the world.

Kohl said farmers will see more inflation pressure through 2022, but by 2023 producers and bankers could see a "burn rate on capital."

Bankers also are going to have to understand low interest rates are going to begin moving upward, affecting their loan portfolios in different ways.

"How do you manage risk in a rising interest-rate environment?" Henderson asked. 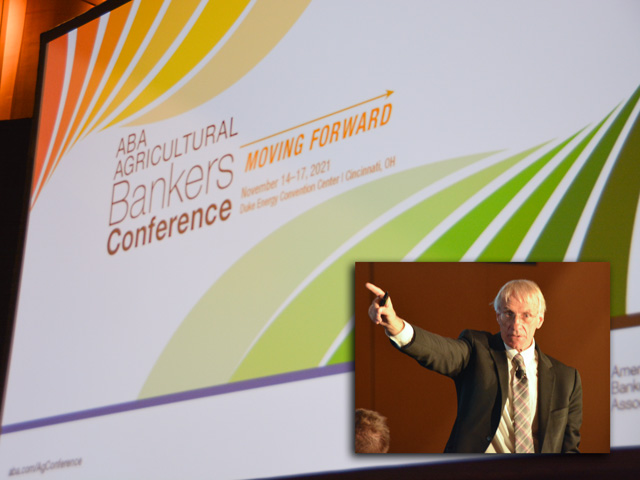