INDIANOLA, Iowa (DTN) -- Describing today's farmland market as "hot" would be an understatement this fall, especially in Iowa. Farmland values are posting record highs and land auctioneers have never been busier.

"It was a nice farm, but not a perfect farm," noted Doug Hensley, president, Hertz Real Estate Services, based in Nevada, Iowa. "Keep in mind that in July of 2020, when this farm was purchased, the world looked very different. COVID-19 lockdowns were still widespread, it was pre-derecho and pre-rally in the grain markets."

Today, farm real estate offices across the Midwest can hardly keep up with all the inquiries and sales coming their way. Hertz Real Estate Services has 30 land auctions scheduled for the 20 business days in November. People's Company, based in Clive, Iowa, has seen a 50% to 60% increase over last year in the total number of farm auctions it conducts in nine states.

Farmers National Company, which covers eight states from Indiana to Nebraska and from North Dakota to Kansas, had twice as many land auctions booked compared to a year earlier.

"In our fiscal year, which ended Sept. 30, we sold 50% more acres in the year than in the past three years," reported Randy Dickhut, senior vice president of real estate operations of Farmers National, which is headquartered in Omaha, Nebraska.

Hensley said many farmers will make more money in 2021 than they ever have.

"Iowa is the hotbed of farmland sales," said Farmers National's Dickhut. "They got a better crop than they expected. There are some awfully good yields. You see a boost in farmer optimism."

In Illinois and Indiana, farmer enthusiasm was dampened by double normal rainfall in October and lower than expected yields. "Some Eastern Corn Belt farmers still got a decent yield of 220-240 bushels of corn per acre, but in early August, they were hoping for 250-280 bushels," Hensley said.

Non-farm investors are also active in the farmland market.

"There's a massive amount of cash in people's pockets from COVID incentives and money printing by the Federal Reserve. In some sales, high quality investors have out bid local farmers," People's Company president Steve Bruere told DTN, noting that farmers are still the largest segment of farmland buyers.

"Investors are actively chasing all types of land. Recreational land is hot; development land is hot; farmland is hot. The whole world is on fire!" Bruere exclaimed. For more on land purchases by institutional investors and foreign countries, please read: https://www.dtnpf.com/….

Buyers are also worried about inflation, which hit 6.2% in October, and farmland is often considered a good hedge, Bruere said. The last time inflation was over 5% was in November 1990. You'd have to go back to 1982 to find inflation over 6.0%.

"Farmland is very positively correlated to inflation. It's almost 1:1," explained Howard Halderman, with Halderman Farm Management and Real Estate Services based in Wabash, Indiana, which does business in six states.

Potential changes in the tax code, especially the proposed increase in capital gains taxes, have provided extra motivation to sell for some, explained R.D. Schrader with Shrader Real Estate and Auction Company in Columbia City, Indiana. Hensley agreed, adding that most sellers want to close before Jan. 1.

"We're seeing a lot of sales from generational transfer," said Farmer's National's Dickhut. "The tail end of the World War II and Korean War generation is passing away, and their children and grandchildren are thinking now may be a good time to sell the land they recently inherited at these land prices. The next generation is taking action. Even if Congress's attempt to change the step-up in basis is now off the table, it sparked the discussion."

Farmland values have shot up 15% to 30%, depending on the area, the farmland brokers report. In Iowa, which evaluates each soil type's productivity on an updated Corn Suitability Rating (CSR2), most farm sales were between $110-$115 per CSR2 point on a per acre basis. This year, all Iowa land auctions tracked by People's Company averaged $160 per CSR2 point statewide.

"We are having sales range from $140-$200 per CSR2 point, depending on the location," Hertz's Hensley confirmed.

"Demand has so far kept pace with the increasing amount of farmland on the market," said Hensley. "But we may see sales volume fall significantly after Dec. 31 if the tax motivation goes away."

"If interest rates go up 200 basis points and commodity prices fall with a bumper South American crop, combined with rising input costs, that could slow the land market." Halderman said. But for now, the market is not over saturated with a supply of land.

"And in this crazy market, even though [farmland] prices are too high, demand is strong, and the market is going higher," Bruere said.

Hensley cautions that the land market can't continue to run at the same volume pace as the last two quarters in 2021. "The first 60 to 90 days in 2022 will be a marker for the farmland market in 2022," said Hensley, adding the "perfect storm" in farmland may reduce to a squall. 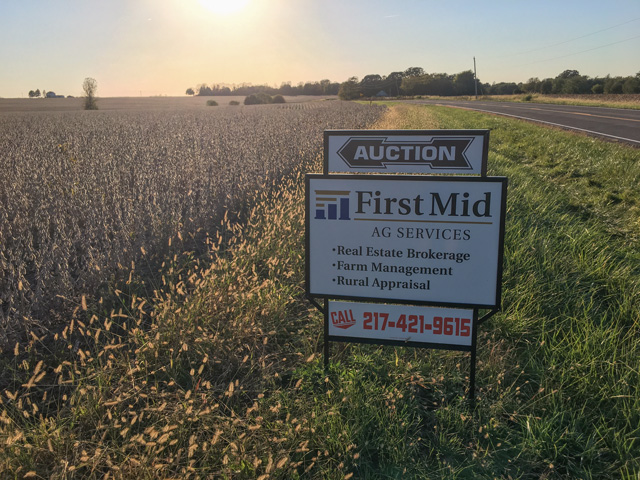