STEAMBOAT SPRINGS, Colo. (DTN) -- The key, David Hula said, is consistent emergence. Or at least it's a key to the world-record corn yields he's logged on his Virginia farm, topping out at the eye-popping 616-bushel-per-acre crop he harvested in 2019.

"Several years ago, everyone was talking about that picket fence -- even spacing -- and how important that seems, but even more important to me is even emergence," he said.

So, if Hula could choose any technology to add to a planter, any one feature he considers to have the most bang for its buck, that's the goal he has in mind.

"No. 1 for me would be down force. If farmers are going to retrofit their planters, that's what I'd recommend. We had pneumatic. Now it's hydraulic, and that would be the No. 1 thing I'd want."

This spring and summer's spike in commodity prices means that for the first time in years, some farmers may find themselves feeling a bit flush with some cash to invest. In this sixth and final installment of DTN's special series "Keep the Good Times Rolling," which explored ways farmers can capitalize on current prices to set themselves up for future success, we'll discuss the tough decisions farmers face when looking to spend on equipment and technology. Do you buy new or upgrade old equipment? Look for the cutting edge or turn to something more tried and true?

It's not as easy as it seems. Major agriculture manufacturers have fought bitter battles in recent months to acquire the raw materials they need to build equipment. The price of steel has more than tripled for some. Rubber has been in short supply, as have plastics. A lack of microprocessors has slowed production even more across many industries, from tractors to automobiles. (You can read more on those struggles here: https://www.dtnpf.com/….)

Many equipment companies are already sold out of their 2021 builds, and some have restricted orders on their 2022 line as well, so spending money on upgrades isn't as simple as it has been in the past.

Still, the question remains: If you've got some cash and want to spend it on equipment, where's the best bang for your buck?

There almost aren't enough ways to qualify a list of "Where should a farmer invest money in equipment and technology?" The right answers depend on location and soil, weather and crops. Is the farmer young or old? Does the farmer have a heavy debt load, or is debt-free?

"Farmers who make money buy stuff," said Terry Griffin, a precision ag specialist and ag economics professor at Kansas State University. "It can be hard to tell what came first, profitability or technology."

Still, he said farmers in general may already be providing an answer to what they value most despite all those potential qualifiers. He's spent years collecting data on what technologies farmers are adopting, and about 70% of Kansas farmers use some form of automated guidance.

The proof of profitability is likely in those numbers.

"Farmers are already telling us what has the best rate of return for them, and for the most part, it's anything automated, guidance, section control, auto boom shutoff, planters that automatically shut off rows when they're entering areas already planted," he said. "Anything that's automated has a pretty high adoption rate."

Guidance might allow someone to log more hours while staying fresher, creating an efficiency, whereas boom or planter shutoffs could lead to big savings on inputs.

North Dakota State University precision ag professor John Nowatzki suggested a strong market might be a time for farmers to invest in equipment that will allow them to better weather the weather.

"One of the things that interests me is strip tilling, and using strip till in the fall so they can plant in the spring, particularly if they're having dryer seasons," he said. "I know that's not something they can do every year, but if they have an extra $100,000, that would be something to look at."

Preserving soil moisture is an issue that varies by region, but one that's proven critically important in Nowatzki's drought-wracked home state.

He also eyeballed soil testing coupled with variable-rate fertilizer application as a way for farmers to spend money to save money. In one of his classes, they came across a 75-acre field in central North Dakota that had about 10 acres in the middle that always produced about half of the average yield of the field.

"We did some soil testing and there's a shale barrier down about a foot, so the roots don't get down," Nowatzki said. "It just makes no sense to put the same rate of fertilizer across that whole field. If you can save money there, it's going to pay for the equipment you use to do variable rate and for gathering the data to get those zones established." (To read more on agronomic investments farmers are making, please read the second story of this series here: https://www.dtnpf.com/….)

BUYING FOR THE BOOKS

Steve Arnold, who farms wheat and milo in southwest Kansas, has invested in nearly every technological trend that's come along in the last three decades. He's an early adopter in the extreme.

"I could start a museum," he said with a laugh.

He hesitated to suggest if any of it ever brought significant rate of return, at least something that would show up in his bank account.

"A lot of times when you're going after technology, you buy it because it might make life easier," he said. "Think about autosteer. It took a lot of stress out. You could run after dark, things you couldn't do with a marker. But it's kind of hard to put numbers on what it's worth to you."

His answer to the question wasn't the newest bit of microchip wizardry or something that even goes to the field, however.

"I'd lean toward automated accounting and record keeping," he said.

That, too, may come down to comfort. He said the system he and his wife, Kathleen, have used for years can leave them both frustrated because they can't be logged in at the same time. He's experimenting with a program from Traction Ag, an Indiana-based ag startup software company that's barely a year old. Its program can be used on mobile and desktop and promises to track field profitability and record expenses on the go.

"A lot of accounting software doesn't really have all the nooks and crannies for use on the farm," Arnold said. "They might work pretty well for someone who's getting a steady weekly income, but they don't work as well when you're buying a lot of supplies in one season and carrying some over to the next, for instance."

BEWARE IN THE AIR

So, what should farmers be wary of? They don't cost as much as a new tractor -- or even some tractor parts -- but Griffin warned against investment in aerial image drones at this point, not because they can't be useful, but that they aren't yet.

"There's no magic that flying over a field will make the corn grow better," he said. "They're almost like yield monitors, but not as useful. It's after-the-fact information, what went wrong last year, but not usually telling you something we can make use of this season. They're nearly a perfect substitute for an airplane, which is nearly a perfect substitute for a satellite. We have satellite data going back 60 years, and we have yet to use any of those platforms in a widespread production sense. The research has not caught up yet."

An aerial camera drone might have one use, though.

"The best use I've seen for them is putting something on social media," Griffin said. "Flying around the combine or the sprayer, it makes a nice, fun video and those can be used for farm management. If you're in an area that has a fierce market for farmland and you're trying to attract landowners, that might help."

This is the final story in a six-part special series exploring ways farmers can use current commodity prices to their long-term advantage.

The fourth piece in this series "Maximize Profit With Smart Grain Marketing" can be found here: https://www.dtnpf.com/….

Experts also suggest farmers build their working and focus on making small improvements to boost their farm's financial performance. You can read more in the fifth pieces of this series, "Boost Your Bottom Line by Building Cash Reserves, Investing in Income-Producing Assets" here: https://www.dtnpf.com/… 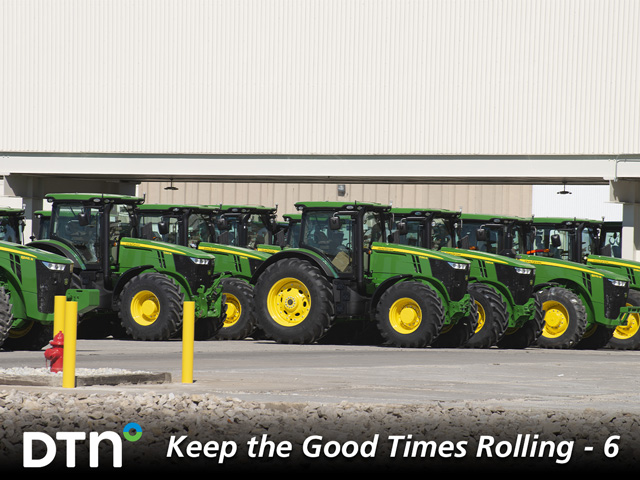