STEAMBOAT SPRINGS, Colo. (DTN) -- Sometimes, all you can do is step back from the screen, catch your breath and shake your head before diving in and trying to figure out a way forward.

That's what more than 35 years of studying the commodity markets has taught DTN Lead Analyst Todd Hultman. There have been hurricanes and earthquakes, an economic collapse that rattled the foundations of the world financial system and a global pandemic. Now, it's hogs in China and rain in Brazil that throw a wrench.

"These impossible things you never think of seem to happen every now and then," Hultman said. "It definitely does stretch your imagination."

The last few months of commodity price swings may have plenty of producers stepping back from their screens and shaking their heads, but Hultman and other marketing experts said the key is to follow up with solid decisions after those few moments of disbelief.

In this special DTN series, we explore a variety of ways farmers can "Keep the Good Times Rolling" by making smart investments and business decisions that will pay off when the price cycle heads lower. This story, the fourth in the series, discusses important factors for farmers to consider as they sell crops in the current price environment.

The advice varies from region to region, crop to crop, and of course, farm to farm, depending on everything from debt load to rain prospects. All of those should factor in heavily, Hultman said, perhaps even above the current price of a bushel of corn or soybeans.

"Risk management isn't always about, or shouldn't always be about, a predication of what prices will do," he said. "Sometimes really good risk management can be in the form of a cheap put option."

Hultman and DTN have already advised selling 50% of this year's corn production for those farmers outside drought regions and 25% of soybeans.

"Obviously that's a different situation if you can't be very confident about your production," Hultman said. "We see these high prices as worth taking advantage of, not that we're necessarily bearish, but because there's so much uncertainty ahead. It would be a tragedy if we got to harvest time and the price was $2 lower on corn and we didn't take advantage of this.

"I'm not saying corn will be $2 lower," he continued, "but things happen."

Hultman said USDA's Acreage report last week said there were only 92.7 million acres of corn planted. That puts a rough estimate of production at 14 billion bushels (bb) to 14.5 bb of corn against expected demand of 14.8 bb and has buttressed his faith in a strong market with a limited crop.

"If things go as expected, stocks are expected to tighten 300 to 400 million bushels," he said. "The big question will likely be China and China's demand, and right now, USDA is estimating a repeat of last year, that China will probably import roughly 1 bb of corn."

"Really, the main risk I can see now to this bullish expectation, other than some unforeseen event or problem, is maybe China will find some way to ration its corn needs back in the new crop season," Hultman said. "I don't see any sign of them being able to do that. Their current corn price is still extremely high -- $10.30 -- so that tells me they still have a tight demand situation within their own borders."

The recommendation on selling pre-harvest soybeans isn't as high, just 25% of the expected crop, but there's another promising market predicted there.

"The situation with soybeans is tilted toward bullish, and it just seems to likely we'll have another tight supply situation here in the season ahead. It's hard to imagine that not happening without some unforeseen event," Hultman said. "On soybeans, we're still keeping our powder dry," and not pulling the trigger on sales.

All the promising data about foreign trade and the prospects of Brazil's crop -- or lack thereof -- could mean a huge windfall for farmers who hold onto their crop beyond the harvest season and into the potentially lucrative 2022 spring season.

Playing that game carries risk, however.

"The market is very good at enticing people to do the wrong thing at the wrong time," Hultman said.

Dan O'Brien, an ag economist and professor at Kansas State University, suggested farmers strongly consider their cost of production and just how far above of that they'll be selling when they're tempted to look for even more profits.

"We're normally just looking to beat the cost of production. We're above that cost now, so we're having to think differently," he said.

A year ago, O'Brien calculated the break-even cost of corn in his region at $3.60 per bushel, and this year he's figuring it closer to $4.25.

This year, farmers could be looking at 30% or higher profits more than that cost. The DTN National Corn Index, a measure of current cash corn prices, was $6.32 per bushel on July 8, while December corn futures closed at $5.23 3/4.

Before deciding to chance it and wait for perhaps an even higher return, O'Brien suggested farmers think about their potential earnings in a more real way.

"One way to look at it is to think about what would X amount of dollars do to knock down some machinery loans or farm debt, to anchor it in something tangible," he said. "You could be talking about 10s of thousands of dollars, and that could accomplish some long-term goals in a unique year that we don't always get."

Reaping a 2021 windfall could be about more than thriving this one year.

It could set the stage for surviving through the next downturn.

"When prices are high, producers tend to maybe not pay as close of attention to all the tools and strategies they use in other seasons, but you can't let your guard down ever," said Tom Lipetzky, director of marketing programs and strategic initiatives for the Colorado Department of Agriculture.

"Always keep your eyes on the ball when it comes to marketing, regardless of price."

Lipetzky said he marvels at the creativity he's seen Colorado farmers employ in marketing their crops in leaner times. But seeking out those same opportunities when the tide is high could not only lead to a little fatter 2021, but also the kind of relationships and contracts that could be much more critical if prices are lower down the road.

"One of the key things is to be open to new opportunities, to keep looking for those ways to find what the market wants and what the market will pay a premium for," he said. "If you can find those, latch on and move in that direction."

For example, he's seen a sharp increase through the last decade in Colorado farmers' relationships with the likes of malt manufacturers and craft distilleries and breweries, places that often will pay a premium for preferred varieties of grain.

That could be only the start, too.

"A lot of producers are hearing the requests from consumers about being climate friendly, environmentally friendly. We're starting to see that consumers want to know where their ingredients come from. They want that story with the wheat or the corn," he said. "We're seeing a lot more producers consider what the consumer wants, then get into that marketplace. They're keeping their minds open to those opportunities, and it could really help them in the long term."

It's the kind of thinking that could help protect against those head-shaking days.

Commodity prices may be high now, but it rarely takes long for that to change. Experts say farmers should be excited and take advantage when possible but also prepare for an uncertain future.

"I'm proud of farmers in that I don't get the sense there's a lot of over-optimism," Hultman said. "For the most part, everyone is staying skeptically guarded because we've seen big price spikes before. Typically, they don't last long and they come crumbing down faster than they go up. You get conditioned not to take this for granted, and that's a good thing."

This is the fourth of a six-part special series. Next in the series: We will explore ways farmers can put their extra profits to work in their finances, including time-tested strategies for success and common pitfalls to avoid. 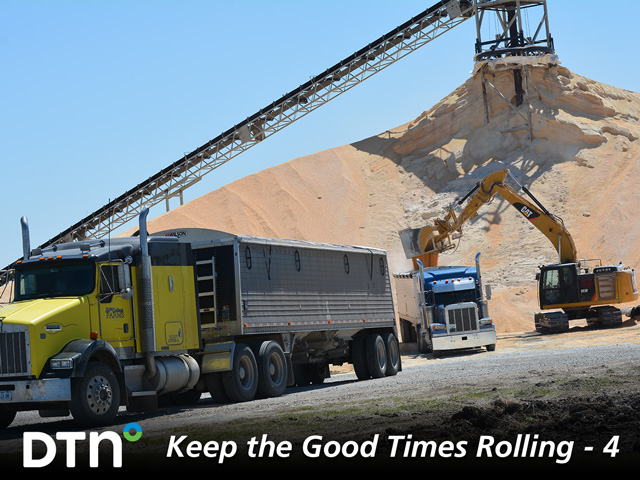