STEAMBOAT SPRINGS, Colo. (DTN) -- Four decades into a career in agricultural manufacturing and Mark Parriott thought he knew how the business could fluctuate.

Sometimes supply will tighten up when a Gulf hurricane makes landfall, said Parriott, the senior vice president of operations for Kinze Manufacturing. Sometimes a warehouse fire will drive up prices on raw materials, or some other far-off disaster will ripple in a way that resonates in his world.

"Those are the problems we get paid to deal with," he said.

But the supply crisis of 2021, a combination of a thousand factors, including everything from the global pandemic to the Texas freeze, is something else entirely.

The price of steel has more than tripled on the Iowa manufacturer. Rubber for tires, hoses and belts is difficult to acquire. Plastics are in short supply. It's been tough to hire new employees. Suppliers have canceled, delayed and shrunk orders without warning. Some, with well-established relationships with Kinze, have even asked the company to stop ordering altogether.

And somehow none of those even count as the big problem. Computer chips and electronics are in such short supply it's their availability that will dictate how much the ag equipment company is able to produce this year.

"The world is short on those chips, and they will pace what we sell this year," Parriott said.

All the complications led to a difficult series of meetings in the company's Williamsburg, Iowa, headquarters in recent weeks. After days of debate, the company arrived at an unprecedented decision: It bumped all its prices by 10%.

The increase doesn't apply to orders dealers had already negotiated with farmers and signed, but everything else will see the jump.

"It was an extremely difficult decision to make," Parriott said. "It wasn't one 10-minute meeting. This was multiple very long, very painful, very passionate meetings. These were some of the most passionate conversations I've been a part of at Kinze."

Kinze is far from alone in feeling a truly unique pinch these last few months. A global crunch of supplies of seemingly every sort has led to shortages in many industries.

In the ag industry in particular, the confluence of high commodity price and government stimulus funds combined with years of deferred maintenance in leaner times, all aggressively magnified by worldwide raw material shortages, factory shutdowns and shipping delays attributed to the ongoing COVID-19 pandemic have left those in the industry facing problems they never could have imagined.

"From production to supplying service parts, the entire industry is feeling these effects," said Scott Harris, CaseIH vice president of North America. "The entire value chain from suppliers all the way through end users continues to deal with COVID-related staffing and supply issues. It certainly has brought new challenges for all of us."

CaseIH's North American manufacturing facilities have been humming steadily since they got back in line following the initial pandemic outbreak last spring, but keeping the right parts on the assembly line has been difficult.

Harris said there's an ever-changing list of shortages. It was wiring harnesses, then semiconductors. Tires, too, have been a problem. Even as the pandemic situation has gotten more in control in the United States, the supplies still ebb and flow as different regions endure spikes.

"We're looking at dual sources. Can we get them somewhere else? Can we modify something we already have?" Harris said. "We have to expand our options. Normally, we may work with one or two or three suppliers, but we need to expand and find others that will work and deliver a similar result."

TROUBLE ON THE FARM

The pain has drifted down from company boardrooms to farms, from those operators looking for new equipment to those looking to fix their old machines.

The Walters family outside Hemingford, Nebraska, for instance, never planned to put their five-decade-old International 856 in the field in a serious way again.

"We haven't really used it in the field since probably the 1980s," said Elijah Walters, the fifth generation of his family to take to the farm.

The 856 was purchased by the third generation, his grandfather, John Walters, but was long ago replaced as the farm's main row-crop tractor, or at least it had been until they discovered the mechanical front-wheel-drive hub on their more modern John Deere 8110 cracked. Upon further inspection, the ring gear inside the hub was split in half and had chewed up the rest of the internal parts.

Their local dealer scrambled but couldn't immediately find a replacement part, so grandpa's old 856 was back in the Walter farm spotlight, rotary hoeing a cornfield to keep it from blowing in the western Nebraska wind.

"It's a very common piece because it's been used for more than 20 years," Walters said of the damage. "Other people I know have been struggling getting parts, too."

Jeff Sloan, president of Sloan Implement, an Illinois-based John Deere dealership, said his operation saw runs on parts early, but the fact that it was a smooth and relatively quick planting season allowed them to stay ahead of the wave.

"We have no problem robbing parts off what's in the lot just to keep going and replace those parts when they're supplied by the manufacturers," Sloan said. "That's our last line of defense, and it does keep things going. That's something we'll do more this year."

New equipment in many cases simply won't be available this year or perhaps even next for farmers who don't already have orders placed.

"We were prepared. We planned for double-digit growth this year, so we have the capacity in our plants to meet the demand, as long as we can get supply when we need it," said Harris at CaseIH. "That said, we're ordered out for the model year 2021. We'll begin producing model year 2022 in the fourth quarter of this year, and a lot of that production is spoken for, too."

Still, he said CaseIH plans to continue to increase production, and he doesn't anticipate challenges in meeting demand for model year 2022.

The Kinze plant in Iowa is currently building grain carts for the fall harvest, then will transition to build 2022 planters starting in August. A dealer can't currently place a new factory order for the company's high-tech electronic planters, thanks to the uncertainty surrounding computer chips, though orders already placed by dealers will be filled and farmers can check with their local dealers to find one in stock. 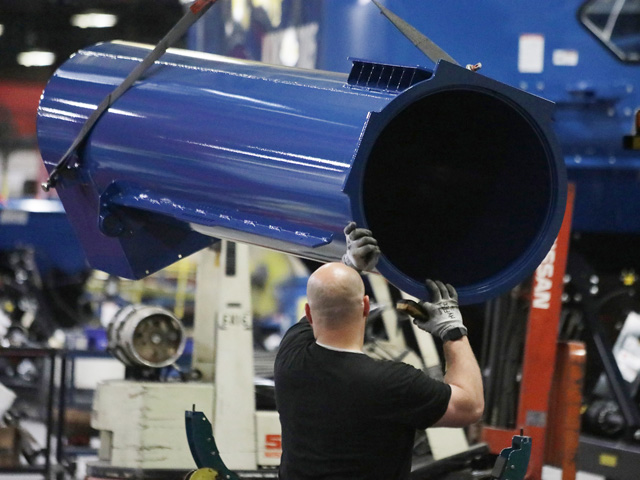