MT. JULIET, Tenn. (DTN) -- After seven years of low to nonexistent profit margins, first-generation Kentucky farmer Ryan Bivens is looking forward to better revenue. However, he worries rising input costs will eat away at profit potential on his 6,000 acres of corn, soybeans and winter wheat.

"It's a welcome time for sure ... we need a good year," Bivens said. "I would like to hope markets stay at a profitable level with current input prices. Farmers are often the world's biggest optimists and pessimists at the same time."

Higher grain prices are fueling optimism. The national average cash corn price is $6.86 per bushel, while grain buyers are offering an average of $14.23 for a bushel of soybeans. While those are lower than this spring, they're among the highest prices farmers have received since 2013, and experts say they could hang around for another growing season or two.

Demand from China, which is trying to replenish stocks while rebuilding its hog population, is driving up global demand for corn and soybeans. Drought cut Brazil's corn crop short and shifted demand to the United States. Farmers opened their bin doors this spring, driving old-crop supplies to the lowest in seven years.

Then, there's doubt about this year's crop prospects amid a sweltering drought in the Dakotas and Western Corn Belt, where growers are watching yield potential decline every day.

"Often, we're driven by how many bushels we produce, more than we are the revenue we generate," Rabobank General Manager Chris Olson said. However, it's not uncommon for farmers to do as well or better financially in dry years, because they get better prices for what they do grow. Revenue protection crop insurance, especially with 2021's high guarantee prices and growth in actual production history (APH) yields in recent years, also provides a financial backstop.

As a result of higher prices, farm revenues are on track to be the strongest in nearly eight years. Unlike the ethanol boom -- when a shift in U.S. energy policy created 5 billion bushels (bb) of annual demand for corn -- experts say this upswing in the price cycle will be more transitory, only lasting a few seasons until production catches up with demand.

"Yes, things are quite positive right now if you're a producer of crops, but as we've seen in agriculture in the past, those things can change, sometimes relatively quickly," he told DTN. "Not to suggest that it's imminent, but at the same time planning so that you're prepared for it."

In this special DTN series, we explore a variety of ways farmers can "Keep the Good Times Rolling" by making smart investments and business decisions that will pay off when the price cycle heads lower. We'll cover investing in new agronomic techniques, building a strong marketing plan and navigating the cash rent environment this fall. Experts will share recommendations on what farmers should focus on financially and what common pitfalls to avoid. And, if you do plan to replace machinery, we'll share how to make sure you're getting the best return on your investment.

But first, we'll explore why the prices are where they are, how long they could hang around and what could indicate a change in price pattern.

Kauffman said last year's crops came in a little smaller than they were predicted, and after years of supply growth, this set the stage for tighter supplies.

"The other part, though, and maybe even the more significant piece going forward, was a pickup in demand growth for a lot of products with the reopening of economies -- part of that being the build back in China, especially when you think about African swine fever," said Kauffman.

It's estimated that China's hog herd shrunk by a third as the country scrambled to control the livestock disease, cutting sharply into feed grain demand. China also relied on its stockpiles to make up any shortages from imports during the trade war with the U.S.

Commodity prices floundered last summer as most of the world's economies struggled with the COVID-19 pandemic. In late April 2020, the DTN National Cash Index for corn stood at $2.80, while the soybean index was $7.85.

"Prices got low enough to jumpstart exports early," said Chad Hart, Iowa State University economist and crops and biofuels specialist. At the same time, China expressed its intent to meet its commitments to the phase-one trade deal, which would require buying $36.5 billion of U.S. ag products in the calendar year.

China went from purchasing almost no corn from the U.S. to buying 921 million bushels (mb), and even though it pushed U.S. exports to a record, China still fell short of its commitments. (See https://www.fb.org/…)

DTN Lead Analyst Todd Hultman said there are many indications of continued Chinese demand. China's premier, Li Keqiang, the second-in-command after President Xi Jinping, recently used his bully pulpit to talk down grain prices. There are also rumors grain analysts have been placed under house arrest. Hultman said he thinks the level of government involvement shows grain prices are a national priority.

Another indication is the price of corn on China's Dalian Exchange at $10.30 per bushel, while soybeans cost $18.01 per bushel in U.S. dollars.

"That's still a pretty expensive corn price," Hultman said. "Just by all market clues that we have and USDA's estimates, it looks like China's going to need to import about a billion bushels of corn in the 2021-22 crop year, so that's still a very big, large supportive factor for the corn price as a whole."

ALL EYES ARE ON SUPPLIES

Hultman said that puts the stocks-to-use ratio right around 7%. "Below 7%, we'll usually have a very dramatic bull market. We're sitting right on the edge of that."

Soybean stocks, estimated at 155 mb, are also tight, although the forecast has eased in recent months.

While demand is expected to remain strong, all eyes are on new-crop production. On June 30, USDA said farmers planted 92.7 million acres (ma) of corn and 87.6 ma of soybeans. Both were lower than analysts had expected.

Drought conditions are especially challenging in the Dakotas and Western Corn Belt, and while it's more regional than the 2012 drought, it can still have an impact on national production. For instance, North and South Dakota accounted for 10% of last year's soybean production, Hultman said. In June, USDA estimated national production at around 4.5 bb.

"We can't just give up 10% of production, or 450 mb, and not expect that to have a dramatic impact on prices," Hultman said. With farmers planting 87.6 ma of soybeans this year, Hultman said it will be hard for production to cover demand. USDA will incorporate its acreage estimates into the July 12 WASDE.

"I still see it as a demand-led bull market, and it seems to have legs," Hultman said. "Because China's purchase needs are so large for both corn and soybeans, it's going to be very difficult for us to rebuild surpluses any time soon," especially if drought takes a bite out of production, Hultman noted.

Hultman said he doesn't see a scenario in the next year where corn prices return to $3 per bushel. He thinks at harvest time there will be a lot of support in the $4.50 range, which is historically still above many farmers' break-even levels.

On soybeans, he said prices will likely stay above $12 per bushel, even if timely rains come in August. That's a far cry from the $8 to $9 prices farmers saw at the peak of the trade war.

But, if production comes up short, prices for both could be even higher.

China's now in the second year of its trade agreement with the U.S., and its target for ag purchases rises to $43.5 billion.

"I do worry about a year from now," Hart stressed, adding that nothing is guaranteed the third year after the deal. "We can't expect China to keep buying at the current pace. Things should fall back to a more sustainable level. Stronger than in the past, but not like now."

Kauffman said whenever prices do pull back, he thinks they'll settle at a higher level.

"I think it will take a little while at least for production to really address the reduced levels of inventories," the Federal Reserve economist said. "If we have a couple of years of very strong production, and you start to see some of those transitory demand growth factors slowing a bit, that's going to weigh on prices."

Kauffman said input costs are often quick to catch up to higher commodity prices but are slowing coming back down. Cash rents and land prices are likely to climb this fall. (See https://www.dtnpf.com/…) General inflation in the economy will drive up the prices of things like steel and diesel fuel. Supply shortages are also leading to price increases. (See https://www.dtnpf.com/…)

Fertilizer prices responded strongly to corn and soybean prices this spring, with nitrogen prices increasing by 55% on average while phosphate prices climbed 67%, according to retail prices tracked by DTN. (See https://www.dtnpf.com/…)

"On a number of fronts, it's possible that some of those cost pressures do start to squeeze margins," driving up farmers' breakeven costs, Kauffman said. "We might not think about $4 corn in the way that we would have thought about it five years ago if the cost structure is different."

This overview story is the first of a six-part special series. As this series of stories progresses, we'll explore ways farmers can maximize on present profit opportunities and set their businesses up for success whenever prices reset. Next in the series: We'll explore what farmers are doing to boost yields this year and in the future to get a better return on their investments. 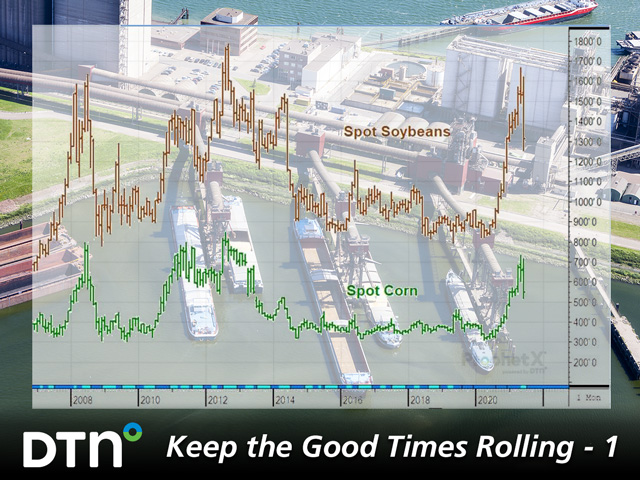