OMAHA (DTN) -- The worsening Northern Plains drought is having a devastating effect on cow-calf producers as very little forage is now available because of the parched conditions. In response, producers in parts of Montana and North Dakota have already begun culling cows.

Longer term, the drought could also have a negative effect on the supply of all feedstuffs for cattle producers in the region. If feedstuffs can be found, high prices could keep some from purchasing the needed feed.

The severe drought gripping the Northern Plains has been significant across the region, said DTN Ag Meteorologist John Baranick. The drought has gradually worsened during the last three to four months with D4 or exceptional drought -- the highest category of drought -- developing over a large portion of North Dakota.

Rain last week was significant but only in isolated areas. Some areas did pick up over 6 inches of rain, so the drought is not uniform across the entire Northern Plains, Baranick said.

"The eastern Dakotas are faring worst as rain has been a little more widespread and heavier across western areas last week," Baranick said.

Tim Fine, Montana State University Extension educator for Richland County in eastern Montana, told DTN his area did see some rainfall last week. While the rain was very welcome, the storms also brought damaging hail to the county and even a tornado to a neighboring county.

"We are way behind with moisture, but I don't think we need to have these types of storms either," Fine said.

The forages of Richland County only grew a few inches this spring and began to head out, a sign there will not be any more plant growth, he said. The dry conditions began last fall with little rain, and the region saw very little snowfall during the winter, which only worsened drought conditions.

There is some irrigation in the county, thanks to the local Yellowstone and Missouri rivers, but Fine estimated about 80% of the county does raise dryland crops and forages. Without moisture, crops and forages will be limited this year, he said.

Add to that the recent heat, which has been ongoing last week and into this week, and the recent rains that have fallen are likely to be quickly consumed by the end of the month, Baranick said.

"We are likely to see some drought reductions on the next Drought Monitor (June 17), but I would be surprised if the favorable trend doesn't reverse by the end of the month," he said.

The lack of available grass for cow-calf producers is already being seen in the form of more cattle being sold at Northern Plains livestock auctions.

Rugby Livestock Auction located in Rugby, North Dakota, saw 4,203 head sold on June 7 (http://www.rugbylivestockauction.com/…). This came on the heels of only 873 cattle sold on May 31 and 931 head sold the prior week, May 24.

Rugby Livestock held a sale on June 14, as well. While they did not see as many cattle as the previous week, the auction did still see 2,703 head.

Present at many livestock auctions are cow-calf pairs and cows being sold. These cattle head to town because of the lack of available forage.

Miranda Meehan, North Dakota State University Extension livestock environment stewardship specialist, told DTN that based on the impact producers are seeing to hay, pasture and rangeland, it is not that surprising large numbers of cattle are already going through local livestock auctions.

In the hardest-hit counties in north-central North Dakota, many producers will not even get a hay crop, while others might see up to a 25% crop, she said. Much of the rest of the state should expect a 50% reduction in forage production.

"Unfortunately, the majority of the rain we received was too late; these tame grass species had already started to put out a seed head," Meehan said.

Many producers were hopeful during late spring that the region could still see moisture and improving conditions, but not enough rain has fallen to drastically improve range. As a result, cattle are now moving to auction as producers now know their situation.

"Most of the moisture needed for summer pasture is needed in April, May and June, and with little rainfall that has occurred, most areas are far behind average," Von Emon said.

One lingering issue on the horizon for those Northern Plains livestock producers could be the lack of feed availability for purchase in some areas, according to Von Emon. Without large amounts of moisture, hay is going to be in limited supply this year along with other feed sources.

Many elevators in Montana are having difficulty getting grains that could be used as alternative feeds, she said.

Meehan said one factor that will influence things moving forward is if these producers were able to get enough rain to support annual forages and the ability to use other crops for feed. All this will depend on the timing of rain, she said.

"Unfortunately, the current climate outlooks are not in our favor," Meehan said.

The drought also extends north of the border and is affecting Canadian livestock producers.

The June 15 Manitoba Crop Report showed Manitoba farmers and livestock producers are seeing similar dry conditions (https://www.gov.mb.ca/…). Several regions had been reporting forage and pasture lands showing the effects of the lack of rainfall. Some rain in the last week will help green up some areas, but overgrazed pastures are expected to be slow to rebound.

Dugout water levels are below normal and close to empty in some areas, and some producers are having to haul water to fill dugouts or are digging new wells.

In addition, both the federal government of Canada and the provincial government of Manitoba are providing funding options for livestock producers suffering because of drought (https://news.gov.mb.ca/…). 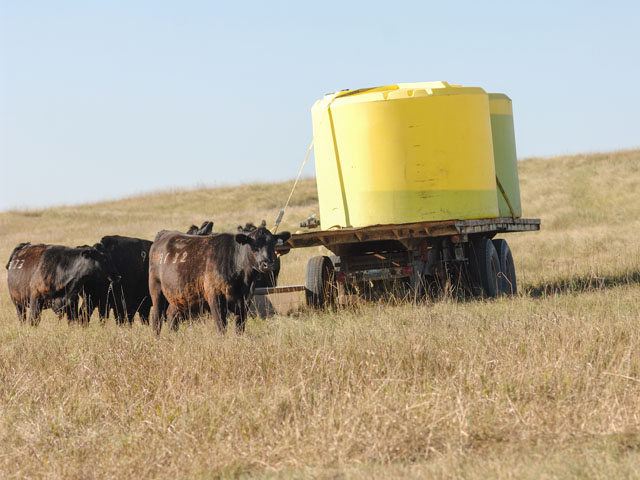