Farmers in North Dakota planted their spring wheat crop in severe drought conditions in early April, hoping for some moisture to germinate it and give it a start; but for some, that moisture did not come. Paul Anderson, Coleharbor, North Dakota, told me, "85% of my wheat is over west and north of Underwood where there had been no rain. That made it easy to make the decision to euthanize that ugly dog known as the 2021 wheat crop and replant corn." You can see from the picture on the left that accompanies this article, the wheat seed was unable to come to life in nearly seven weeks.

The picture on the right that accompanies this article was sent by Jason Hanson, Webster, North Dakota, and he said that was a 570-acre spring wheat field in Devil's Lake, North Dakota;, but the entire northern tier of the state is like this. "Western North Dakota did get some rains but the rains (outside of southern and southeastern North Dakota) are extremely variable," said Hanson.

Hanson, an agronomist and owner of Rock and Roll Agronomy, LLC, told me he went scouting in western North Dakota on May 28 and, "In Russell, Glenburn and Mohall, so far 2-3.5 leaf wheat is up. More canola ground seeded out here and that is better. But man, this forecast looks tough. Wheat looks OK from the road, but when you walk out into it there are lots of gaps and seed just sprouting or emerging."

Alan Klain, who farms south of Anderson near Turtle Lake, North Dakota, said, "We actually have wheat on canola ground that doesn't look the worst. It will need timely rain."

Klain said McLean County is in the highest drought rating, even after spotty showers averaging 2.0 inches rain. "We have wheat seeded on April 4 now emerging. We and others switched a lot of acres to soybeans. More insurance coverage and less inputs. We drove 140 miles to Jamestown on a parts run on May 10 and from 50 miles east of us to Jamestown, 90%-plus of acreage was corn and bean plantings."

I asked Klain if he thought spring wheat acres would be down; he thought likely 25% lower. "People are in a survival mode; cutting expenses until it rains more. Anhydrous docks have little or no tanks being filled. In our case, it was $140 more coverage and $60 less expense per acre for planting soybeans."

Peter Ness, Sharon, North Dakota, said, "Last week's rain got most of the seed in dry dirt sprouted at least. This is the poorest and ugliest wheat crop I've ever seen so far from Highway 200 and north. I haven't taken a crop tour going south towards Fargo yet."

"In my area, there doesn't seem to be any wheat tore up yet," said Darrin Schmidt, eastern North Dakota. "But the stand isn't good and the rain we received last weekend hasn't changed anything yet. Haven't dug in bare area, haven't had time. Some fields have 30% germ, others 90% germ. Really scattered results. It's still dry. Wouldn't shoo off rain right now."

Bryan Kenner, Maddock, North Dakota, said, "Very little, if any, wheat was replanted around here. Some of it looks bad but at this point growers are taking what's there. We received a little over an inch of rain last weekend. This helped the crop a bunch and helped germinate seed that was still laying in dry dirt. However, some damage was definitely done from previous dry conditions. Won't know the extent until harvest likely."

"We have received rain over all our land in the last week and a half," said Kerry Baldwin, Hope, North Dakota. "Amounts range from a half an inch to around 2 inches. Our corn looks really nice and the soybeans are emerging. Don't need a frost tonight. More rain would be welcome. I haven't seen any wheat acres replanted at all. Some of the fields look really nice, others have wheat in two different stages."

Jim Peterson, North Dakota Wheat Commission policy and marketing director, said, "Since moisture is such a critical variable this year, the areas that received recent rains are probably more optimistic than a few weeks ago, but the areas that missed the rains are certainly in tougher shape, and even areas that had early moisture, like southeastern North Dakota, are now finding stress on the crop. I think that is what the market is trying to balance right now. But based on recent strength, I think there is a realization that the recent rains were not as broad or beneficial as initially thought and that final acres will likely be lower than the March survey even."

Peterson added, "As for producers plowing up hard red spring wheat to plant corn, we have heard more of that in recent days as well. In some parts of the state (central areas into south central), it will be more significant than other areas but hard to say how many acres it will entail. I have also heard of more corn being planted in further west areas due to the prospects of getting more 'animal feed' tonnage per acre compared to wheat or barley due to the ongoing drought impact for cattle producers. Corn is the initial crop, so not plowing up previously planted hard red spring wheat.

"The southwest part of the state and the western third of the state did receive some good moisture the middle part of May, but many areas east of the Missouri River and especially up into the northcentral part of the state have continued to miss out. Early planted wheat in those areas is struggling with uneven emergence and just poor growth in general. I don't think the freezing temps are as much of a concern for wheat, as are the perpetual drought conditions this year. Cooler than normal temps have been viewed as a good thing so far, due to the marginal moisture, as periods of high temps will quickly add to the moisture shortage with no subsoil reserves," added Peterson.

"The word of the year will be 'timely' rains, like weekly, or certainly every other week, and inch-type rains," said Peterson. "The initial crop condition rating for hard red spring probably best illustrates the challenge so far this spring in North Dakota, and it looks like we will be hard pressed to achieve the string of strong yielding crops like we have had the past three years. Fortunately, it is still early in the season, but for a few areas, early June moisture will be critical." 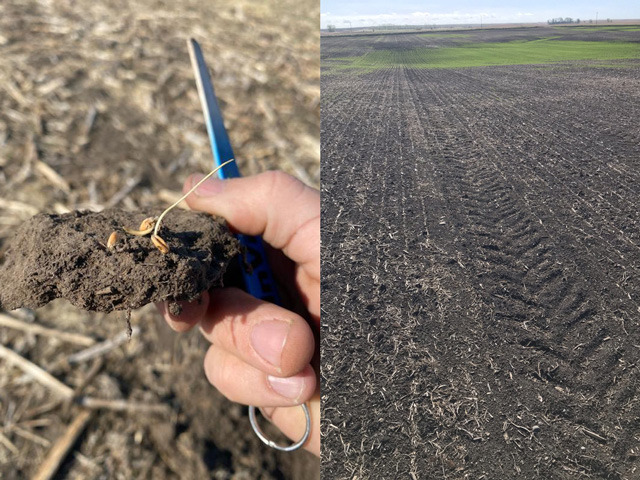